My Temple Stay at Yochiin

Mount Koya (aka Koya-san) is the name given to a set of sacred mountains south of Osaka.  Around 816 AD a monk named Kobo Daishi selected the area as the headquarters for Shingon Buddhism, a sect of Buddhism he introduced to Japan via China.
Koyasan has flourished since then as a sanctuary for pilgrims (and tourists).  At one time over 100 temples operated in the small town that shares its name with the mountains.  Although not all of those temples are still around, many of them are and 52 of them offer the chance to do overnight temple stays.
After a bit of research, I decided to stay at Yochiin. 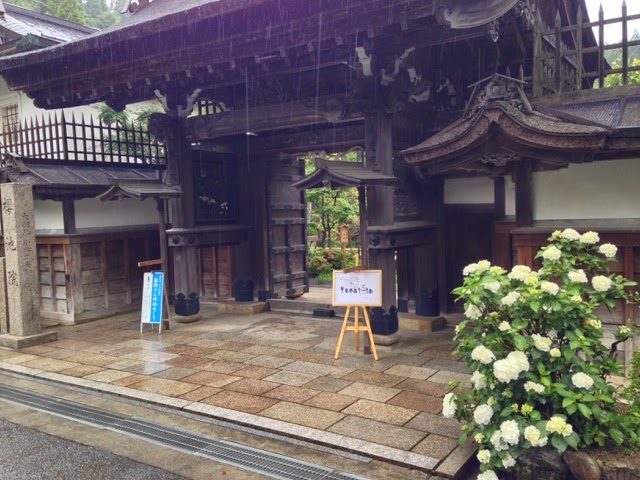 A kind and friendly monk with wire glasses and a shaved head ran out to greet me when I dragged my suitcase into the courtyard.  He showed me where to swap my shoes for a pair of leather slippers, tucked my shoes into a cabinet next to the main entrance, and led me inside, up a steep wooden staircase and down this hallway: 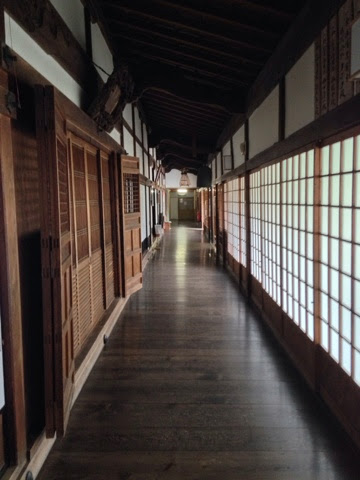 He stopped in front of one of the sets of screens and indicated the paper taped above the door: 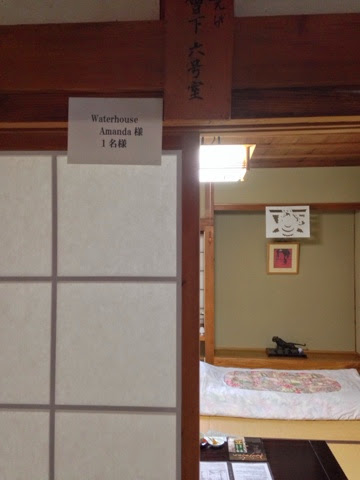 It was my room! 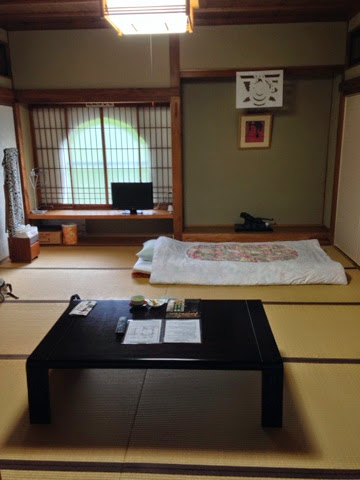 He set my suitcase on the floor next to the window, gave me a quick tour of the room, poured me a cup of tea, and promised to come fetch me when my tour guide showed up.  I pulled out the last of my granola bars to act as a quick lunch while I explored the set of cushions and robe in the corner: 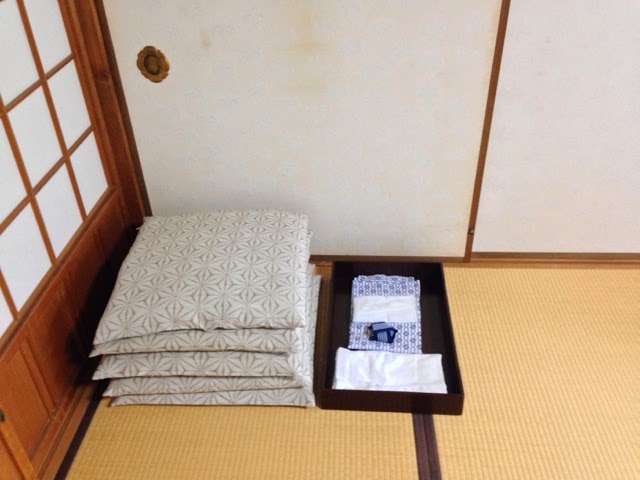 the view out my window:
the town guide left on the table:
and the temple information card and emergency card: 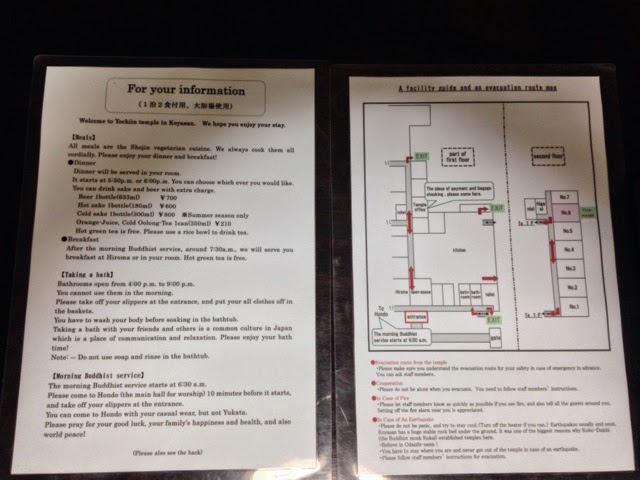 Both were actually quite helpful and entertaining.  I especially like their polite requests that we “please do not be alone when you evacuate,” and that “Setting off the fire alarm near you is appreciated [if you see fire].” 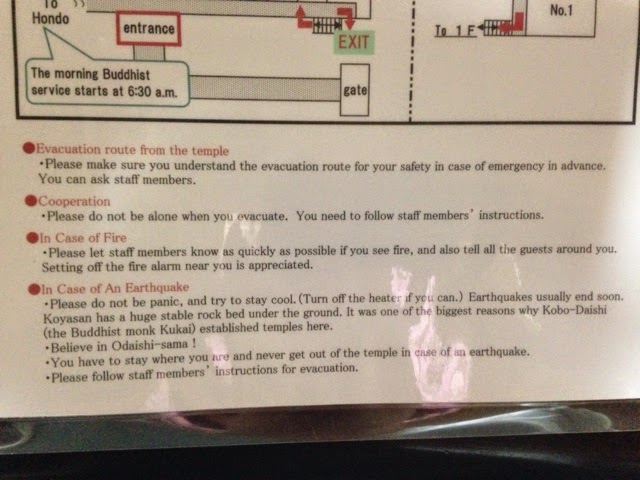 I did indeed tour the village, which I will cover in the next post.  I returned to my room a little after 5:00, which gave me just enough time to change out of and hang up my soaking wet clothes before the friendly monk came tapping on my door frame.  “Excuse me!” he called.  “Dinner!”

He carried in a stacked set of three lacquered trays and set them up on the floor in front of a cushion.  He indicated that I should sit on the cushion, then walked me through each of the myriad of dishes in front of me: 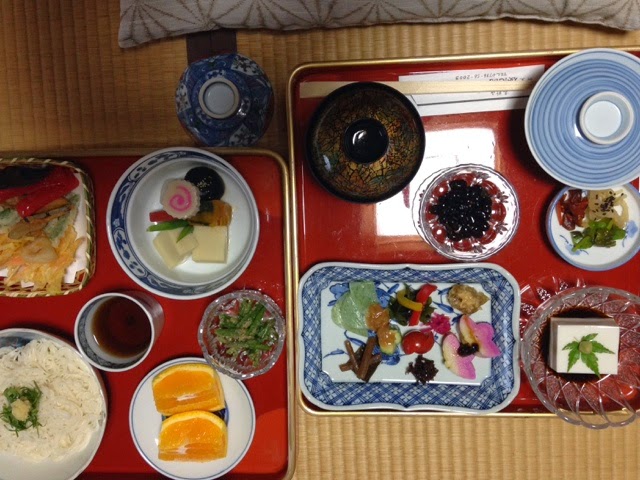 The food at the temples are all completely vegan (can you spot all three kinds of tofu in the picture above?).  It was absolutely delicious, and I felt some peace knowing that the strange blobs floating in my soup were not fish.  It was also rather messy until I remembered that the Japanese bring the bowls to their mouths to hold underneath the chopsticks.  I dripped a lot of sauce onto my pants trying to eat the American way (silly tourist!).
About an hour later, the monk tapped on my door frame again.  “Excuse me!”  he called.  “Sutra copying?”
An apprentice cleared away the food trays while the head monk set up the next supplies on the low table then lit incense and set it in a green metal bowl on the low shelf behind me: 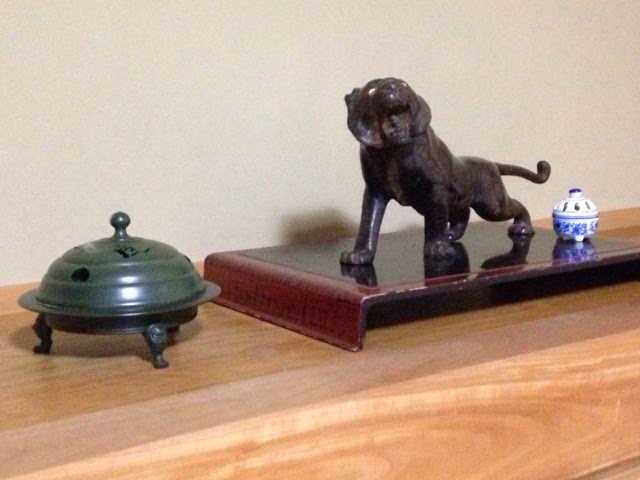 Sutra copying was a bonus activity offered by the temple when I made the reservation.  The monk brought me a long sheet of paper with a sutra printed in reverse on the back.  He set it up on the table with two long silver paper weights to hold it in place: 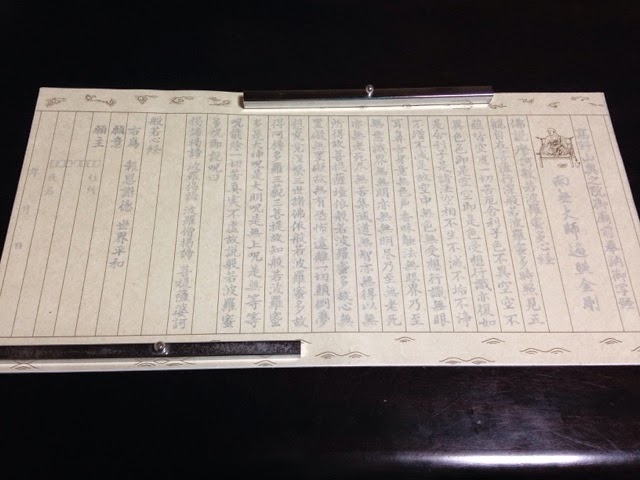 The monk showed me how to use the calligraphy brush pens, instructing me to practice on paper scraps first: 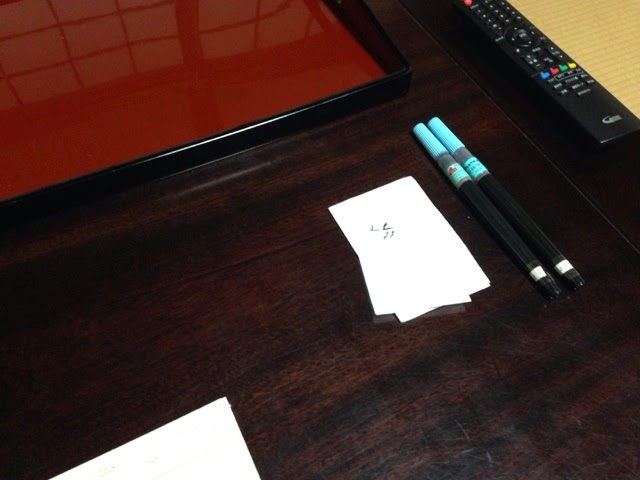 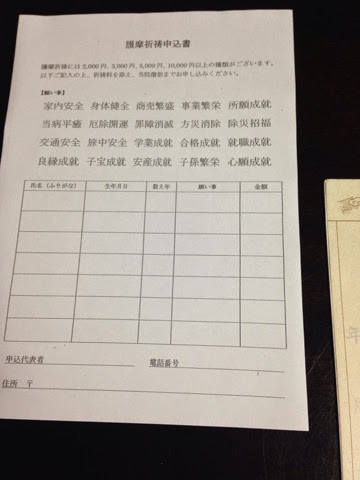 He went through the list with me pointing to each set of characters and telling me what I can pray for, then showing me on the sutra paper where I was supposed to write them out.
Next I was given a copy of the sutra written out phonetically.  “It’s a sutra of the heart,” he explained.  The monk knelt across the table from me, bowed three times, and chanted the sutra while I read along. 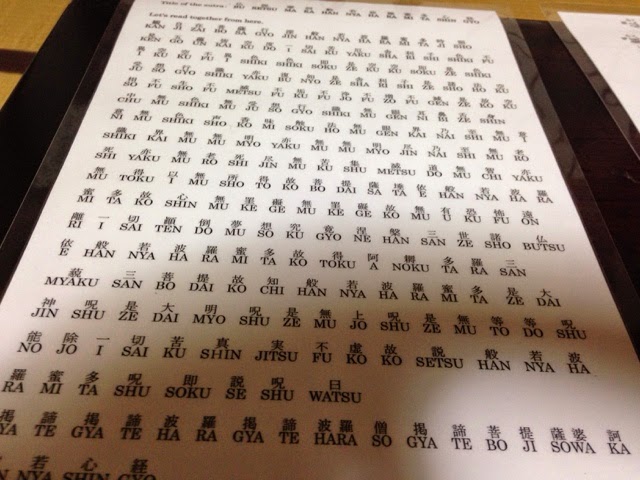 Then he wished me peace, bowed again, and stepped out, closing the sliding door behind him.
I enjoyed copying the sutra.  By halfway through I could recognize some of the characters (“four guys in a boat” was the nickname I gave to my favorite.  I suspect it means “no”): 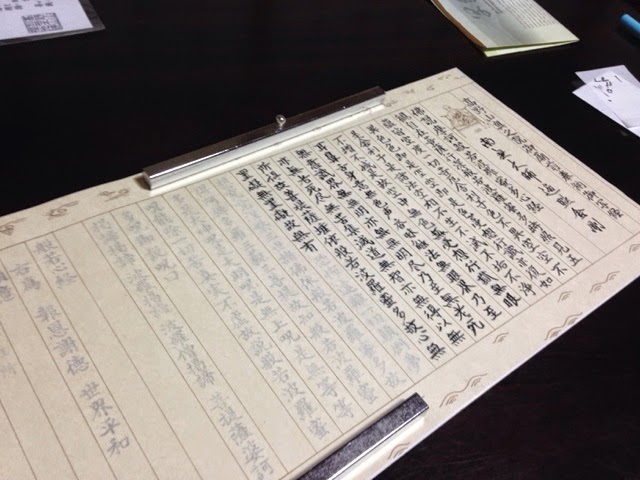 It took me about an hour to do, held up in part by my attempts to stop thinking about how I should photograph the process and focus on meditating, dang it!  and also by the coughing that the incense induced. 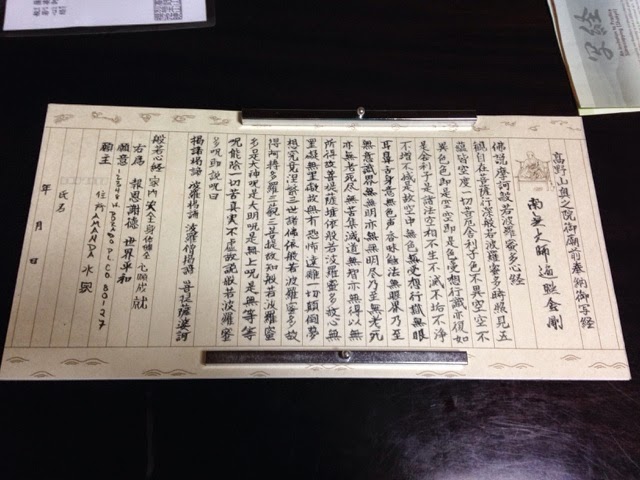 When it came time to write out my wishes, I found (as I feared would happen), I had forgotten what most of them meant.  I picked the few I could recall – happiness, health for my family, and two others I can’t recall anymore – and copied them freehand along with my address and name, as instructed: 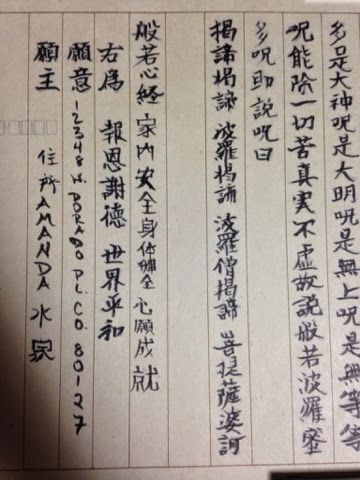 Happily, I finished the session with 40 minutes left until the baths closed.
The monk had pointed out the room for the baths earlier.  There were male and female restrooms (with stalls and stalls of holes in the ground and one Western toilet, much to my relief), and two rooms he told me would be open from 4-9 pm only.  I grabbed my pajamas and toiletries and headed downstairs.  When I confirmed that I was the only one using them (in fact, there was only two other lodgers there – a younger hippie backpacker couple who were already shut up in their room for the night), I ducked back up to my room to grab my cell phone and take a few pictures.
Mask decorations.  I knew I liked the place when I saw these: 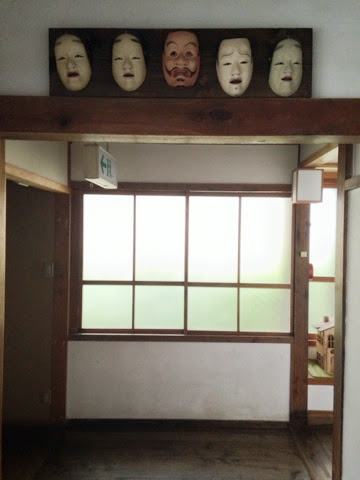 Entrance to the women’s bath: 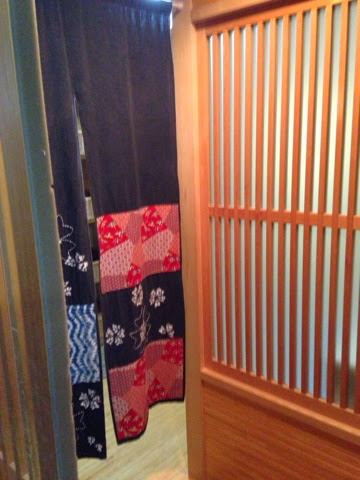 On the other side of those curtains was a set of shelves and baskets that I’m pretty sure came from Ikea.  I undressed here and stowed my clothes away. 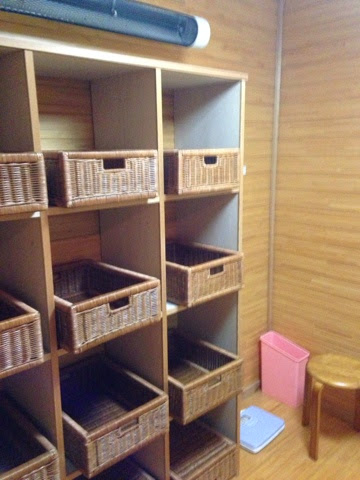 Across from the cabinet was this sink: 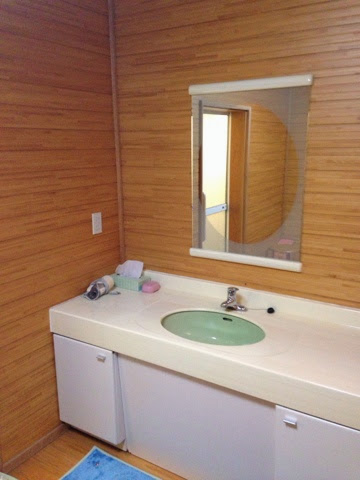 Happily, there was also a hairdryer!
There was also a sliding glass door.  I opened it to find a steam-filled room with eight sitting showers, less fancy versions of the ones at the onsen in Hakone, and a large jacuzzi tub whirling away: 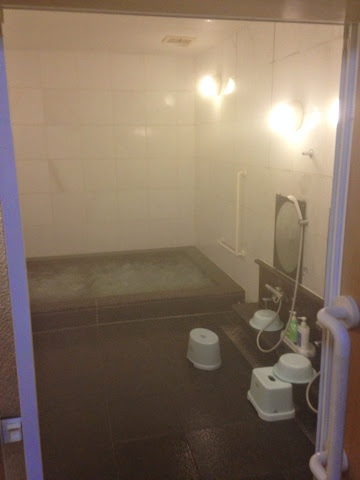 A pro at this, I washed my hair and face at the sitting showers, rinsed myself off, then climbed into the hot, hot jacuzzi.  It was only a few feet deep – enough to cover me to my shoulders when I sat completely on the ground.  It actually felt really nice, and I enjoyed having the whole thing to myself.
Just before 9, I got out, dried my hair, and gathered my stuff to head back upstairs and crawl into bed: 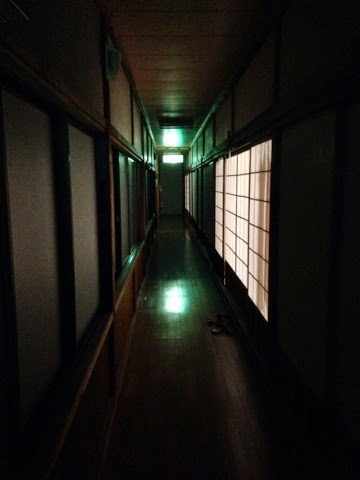 Bed was the traditional Japanese floor futon mat.  I did not sleep very well on it, despite the soothing sounds of the rain storm still going strong outside.
At 6:00 AM my alarm sounded.  I changed out of my pajamas and brushed my teeth before heading to the Hondo for the morning prayer ritual.  The hippie backpacker couple were there too, looking blurry-eyed like me and with their hair in matching buns.  The head monk greeted us, led us through the morning prayer chanting ritual, then showed us around the holy room.  Heavy with incense, filled with dimly lit metal lanterns, and with bright gold shrines to Kobo Daishi, the room brought back a lot of sensory memories of the temples in Thailand.
By the time I went back to my room, I found breakfast waiting for me: 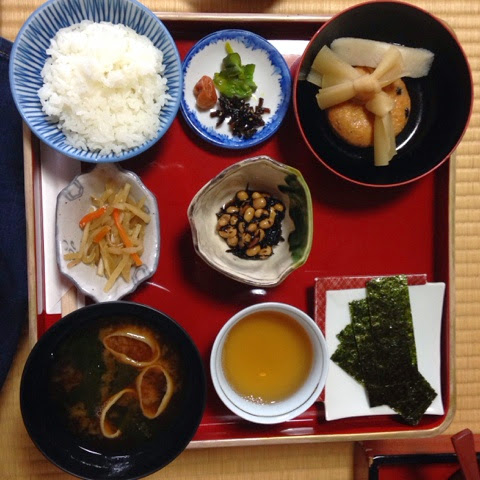 I ate, finished getting ready for the day, packed my bags, paid the monk (who then presented me with an origami figure he made himself as a gift), and walked through town to the bus stop where I could begin the long journey back to Tokyo.