As mentioned, I arranged for an English guide to show me around Koyasan while I was there.  At 1:00, the head monk knocked on the door frame of my room and asked me to come downstairs to meet my guide: 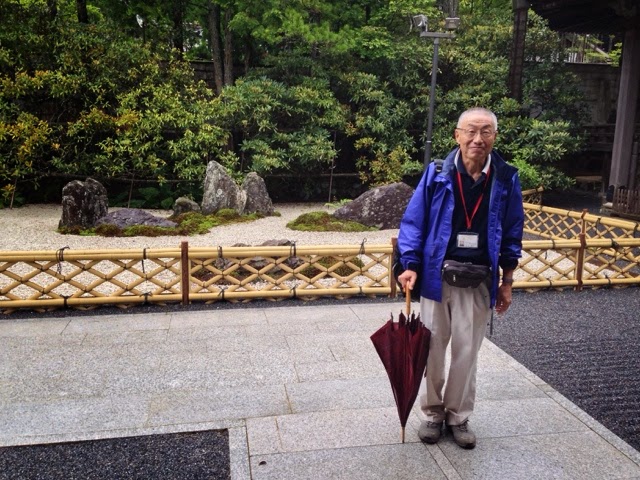 Kawatani Satoshi is a retired chemical engineer who works for the Koyasan Cross-cultural Communication Network by giving tours of the town a few times each week.
It was raining when I came out of the temple, and the head monk asked anxiously if I had an umbrella with me.  I showed him the wee one I bought in Tokyo, which packs tidily into my purse.  He raised his eyebrows.  “No, no, no,” he said kindly.  “Wait here.”
He scurried into the temple and returned a moment later with a huge umbrella.  “Take the temple’s umbrella,” he said.
I did.  And boy, did I need it!  It rained on us the entire length of the tour.  I was soaked up to my thighs and my shoes didn’t dry until I was back in Colorado.  Satoshi led me to each of the sights, and at each place we ducked under whatever awning we could find while he told me about their significance.  We covered three major sites in all:
Kongoubu-ji Temple – the main temple complex in Koyasan. 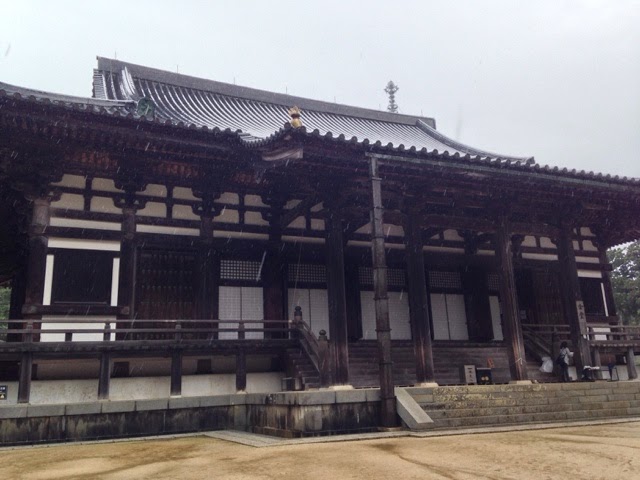 The grounds here include a smaller pagoda that houses (or used to – I wasn’t sure about my guide’s verb tense) scripture scrolls. 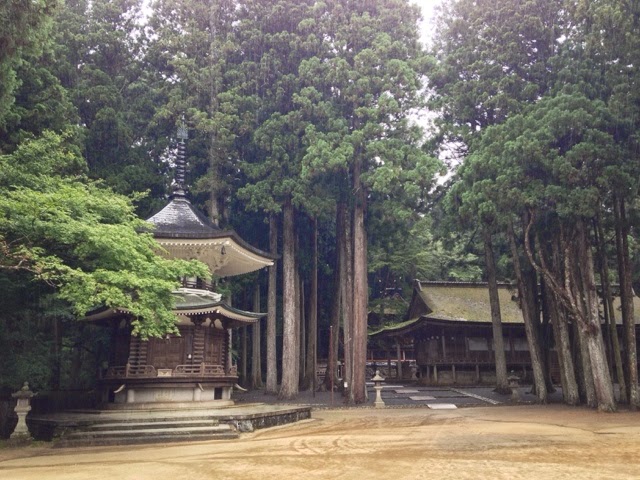 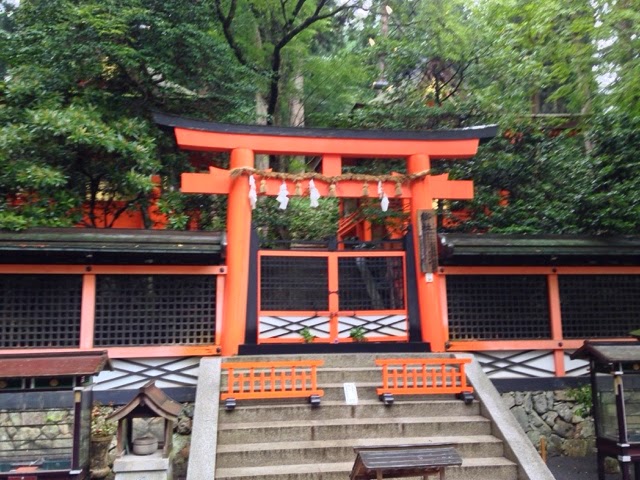 And the giant pagoda Konpon Daito (which, according to Wikipedia, is “the central point of a mandala covering not only Mt. Kōya but all of Japan”) 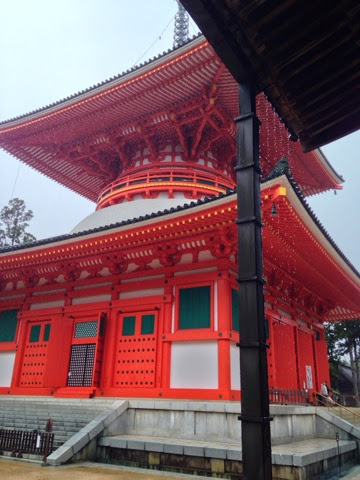 In front of the Kongon Daito is a set of fir trees ringed by a fence painted tell-tale vermillion. 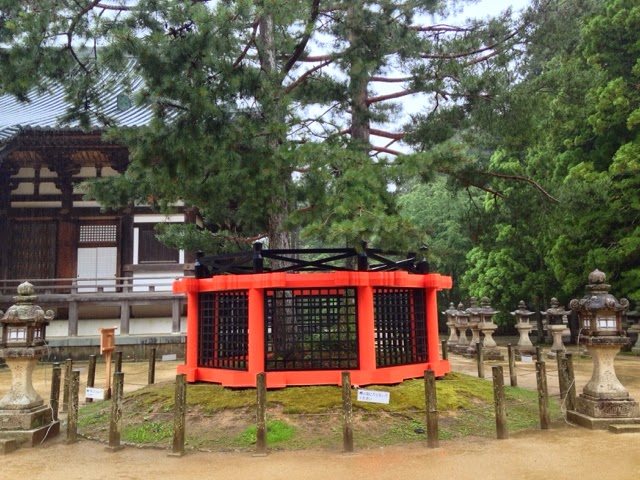 Satoshi told me that when Kobo Daishi was in China, planning to establish a monastic center in Japan, he took a vajra (a pronged ritual tool, seen here in front of a bell:)
and threw it high and far.  He then traveled to Japan and with the help of two hunting dogs and a mysterious and mystical maiden of the forest, Kobo Daishi eventually found his vajra suspended in those trees.  He built his monastic center there, making all of Koyasan a sacred site.
They also have a really big bell: 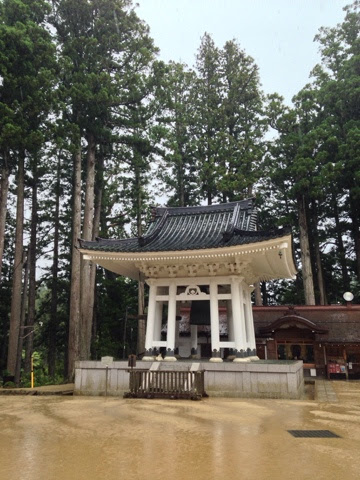 We walked through the town: 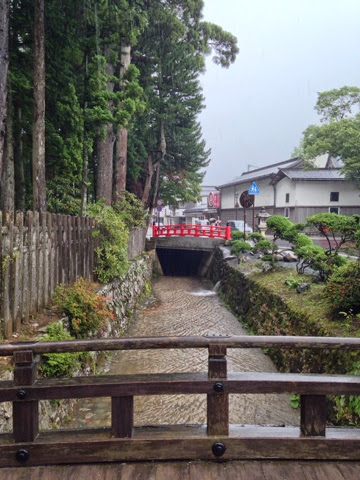 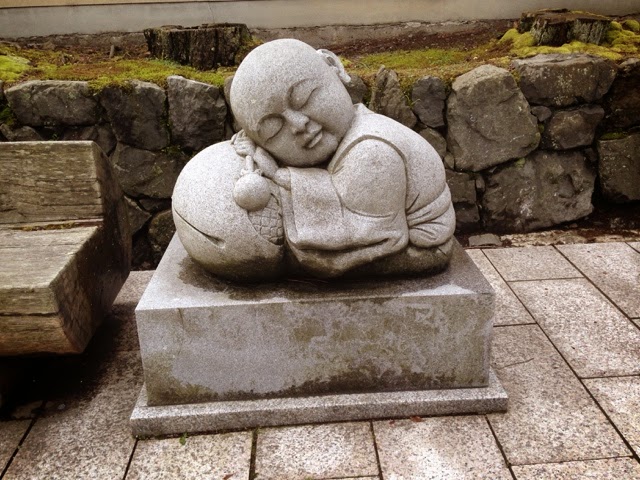 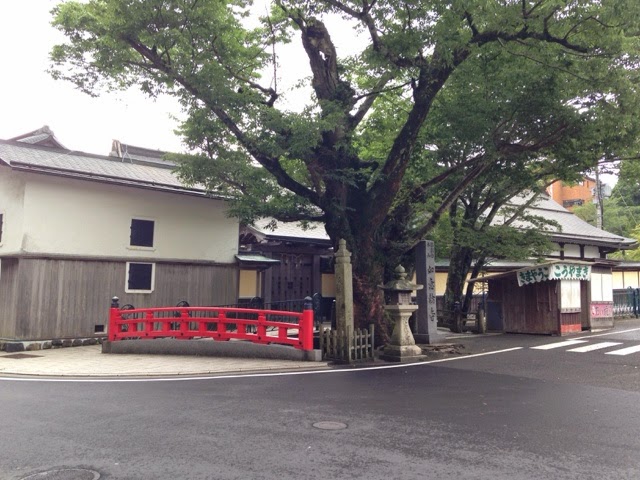 arriving at…
Huh.  I can’t for the life of me recall what this place is called.  I do remember that it was a massive wooden gate (but I’m pretty sure it wasn’t the Daimon) covered with stickers and pasted-on papers.  Satoshi explained that they are names of people and businesses – essentially a less-permanent form of “____ was here” graffiti. 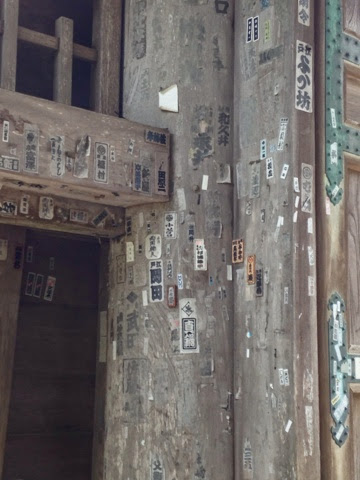 Impressively, some pilgrims have pasted their stickers to the roof of the gate, at least 20 feet above our heads: 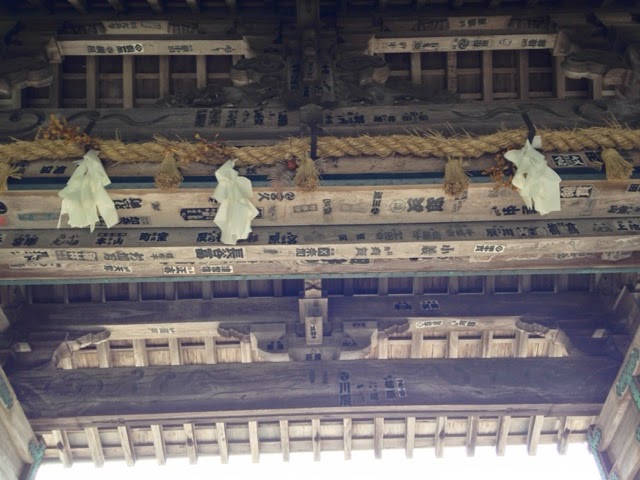 Satoshi pointed out the two barrels on top of the roof of the building beyond the gate: 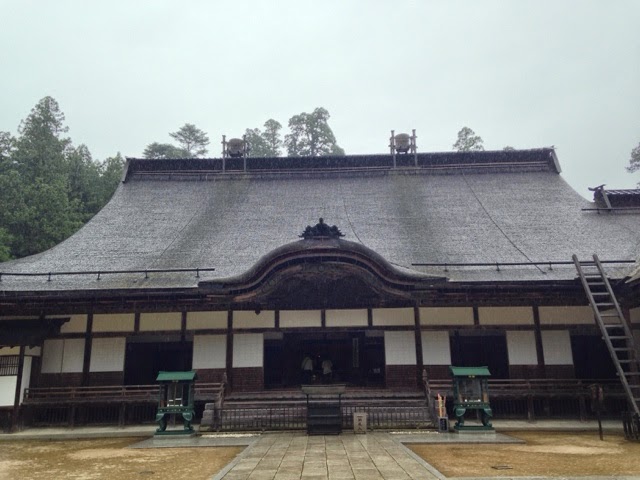 I’d been around enough Japanese historical sites that week to guess what they were for – fire protection.  They collect rain water (and were overflowing today!), and if a fire is spotted, a young monk climbs on to the roof and uses the barrels to soak the roof and put out and flames.

We took the public bus across town to the entrance of the graveyard that surrounds Okunoin – the mausoleum for Kobo Daishi.

With over 200,000 graves and memorials, this is the largest graveyard in Japan.  Between the towering cedar trees, the constant rain, and the moss-covered stone carvings, this was the most magical place I saw on the trip – a place I could easily imagine Totoro or Kodama peeking out through the shadows and the foliage: 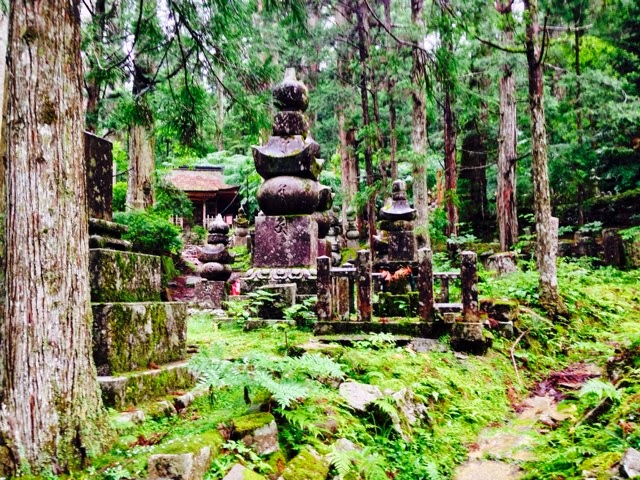 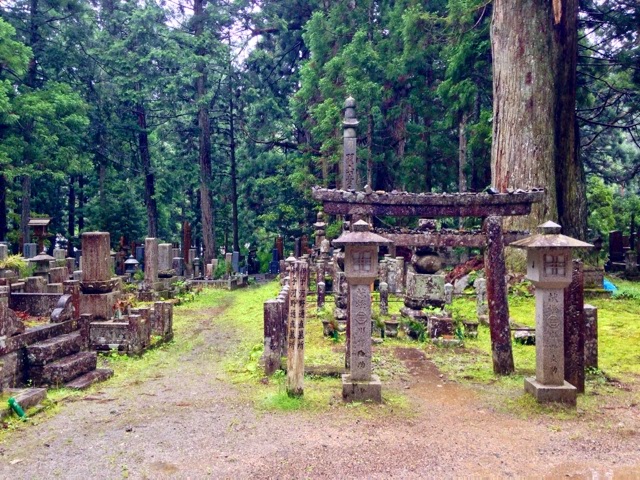 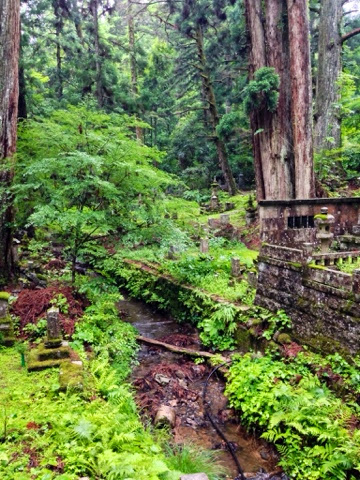 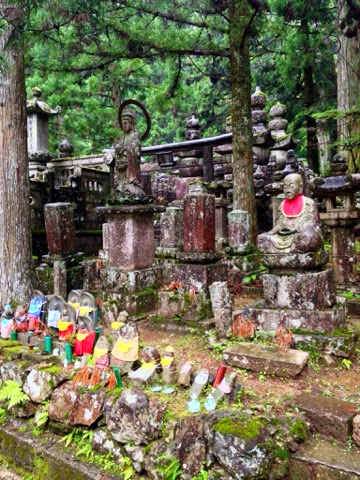 Satoshi explained that anyone can be buried here.  As an example, he pointed out the strange memorial to the right of the tall one in this photo:

Yup.  That’s a blowfish.  It marks the grave of a fishmonger.  I’m not sure which is more poetic – that sculpture, or the memorial below: 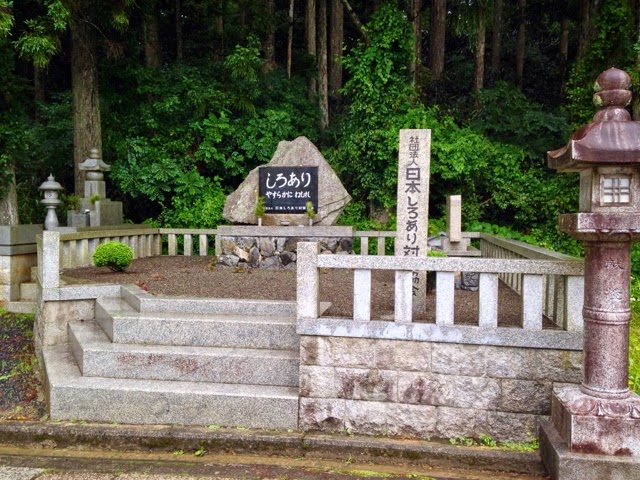 which is sponsored by an extermination company and is dedicated to the termites they’ve killed.
In fact, there were many corporate memorials in the newer part of the cemetery, typically started by the family (such as Honda) but open for employees to be buried there as well.
Here are some of the newer graves.  Can you spot the rocket? 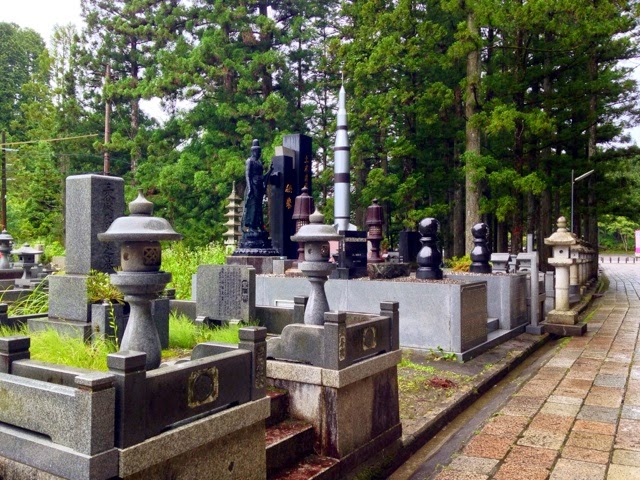 Satoshi and I walked the two kilometers through the rain, the forest, and the graves until we came upon Okunoin – the mausoleum of Kobo Daishi.  Photos were not allowed in that area because of it’s sacredness – when Kobo Daishi was 62, he had this building constructed, settled in a sitting pose inside, and began meditating.  Supposedly, he’s still alive in there – miraculously preserved in a state of eternal meditation waiting for the Buddha to come again.

Two other interesting facts accompanied this information from my guide:

1) Each morning the monks at the temple there take breakfast to Kobo Daishi and leave it outside the chamber for him.  Apparently it’s quite a ritual with a formal procession and a fancy litter to carry the food.  As far as I know, he has yet to eat it.

2) In anticipation of the town’s upcoming anniversary celebration next year, workers have been reconstructing the mausoleum.  Apparently there was a conundrum – how can workers fix the roof above Kobo Daishi without showing disrespect?  They cannot just climb up there because that would put them higher than him, which is not okay.  Satoshi showed me their solution – the workers all tie small tails to their uniforms.  This transforms them into animals, “like squirrels,” he said; and so they can do the work.  Animals are always above us in nature, he explained.

I like imagining American construction workers each selecting which tail he/she wants to wear to the work site today.

After we paid our respects to Kobo Daishi, Satoshi led me to a large open room where the monks hold educational lectures.  He fetched a tray of tea from the nearby kitchen and pulled a package of sweet ginger cookies out of his bag.  He told me they’re made each morning by a man in his village.  They are tasty, and when I told him so, Satoshi insisted I take the rest of them with me – “A small gift,” he said. 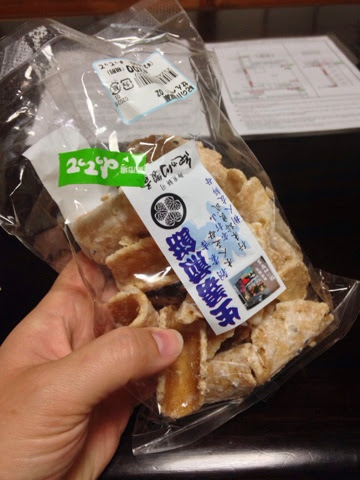 After a rest, we exited the site and took a bus back to Yochiin, stopping briefly at the visitor’s center for some more pamphlets about Koyasan.  I think I was up to 5 or 6 at this point – everyone kept pressing more on me.  My personal favorite of the stack is this one: 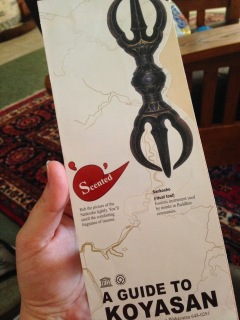 which offers a scratch ‘n’ sniff ritual tool on the cover.
You know – to smell the history.