Six years ago we were on a speech trip.  We’d pulled over at a gas station for a quick bathroom break, and after getting back on the bus instead of doing a headcount, I called out, “Are all of you here?”

“Yes,” they replied.
“Is your speech partner here?”
“Yes,” they replied.
“Are your roommates here?”
“Yes,” they replied.
“Okay,” I said to the driver.  “Let’s head out.”
We pulled out of the parking lot and headed down the street.
“Uh, Waterhouse?” someone called from the back of the bus.  “Paul’s running down the street after us.”
I looked out the window and yes, there was one of my sophomores, franctically running behind our bus waving his arms.
Thankfully, this was in the days of an incredibly devoted “speech mom” who followed our bus in her minivan to every single meet.  She had three daughters who all did speech in college as well as at MTHS.  She was also Paul’s mother.  I watched her pull over, watched Paul get in her car, and I walked to the back of the bus.
“So, Jenny,” I said, sitting down across from Paul’s older sister.  “When I asked if everyone was on the bus, you didn’t notice that your brother wasn’t?”
“Nope,” she said, looking a bit sheepish.
“Huh,” I said.  “And, Jaron,” I continued, turning to the boy behind me, “When I asked if everyone’s speech partner was here, you didn’t notice that yours wasn’t?”
“Nope,” he said cheerfully.
I do headcounts now.
Flash forward to State this year.  We depart from school right after lunch.  When we go to meets east of the school, including State, we don’t actually return to the high school itself.  Instead, there’s a dirt lot about 10 miles east of the school that’s a lot closer to the bus barn; so the bus always picks up the kids who don’t drive at the high school and then the kids who do drive and I meet the bus at the dirt lot.
After lunch I climbed on the bus and ran through my roll.  The six or seven kids who drive to school were already gone, plus a few of their friends who catch rides with them over to the dirt lot rather than ride the bus for an extra ten minutes.   Since I have to lock down my classroom and check out with the admin, I’m the last one to the bus, so I ran through my list of missing kids with those on the bus to make sure everyone’s accounted for.  “Jonah?”
“He drove himself,” they said.
“Chism?”
“Drove himself.”
“Michael?”
“Drove himself.
“Ryan?”
“He went with Jonah,” they said.  I nodded as I checked them off, since I had seen Jonah and Ryan pull out moments earlier.
“Robert?”
“I think he went with Michael,” they said.
“Are you sure?”  I asked.  “Did you see him in Michael’s car?”
“I think so,” they said.
“Did anyone see him leave lunch?”
“Yeah, he left when we did,” they said.
I checked my phone.  It had been ten minutes since lunch let out.  “You’re sure he’s with Michael?”
“Yeah,” they said.
“Alright,” I said, capping my pen and climbing down the stairs.  “I’ll see you guys at the parking lot then.”
I drove ahead of the bus and parked next to the boys who had driven ahead.  Just as I was doing a headcount of them, my phone buzzed.
Mr. Schmidt is bringing Robert to meet you guys.
I shook my head.  Mr. Schmidt is our principal.  Which means Robert was still at school.  As Michael crossed the parking lot from his car to where the bus was pulling up, I called out to him, “Hey, Michael, do you know where your brother is?”
“No,” he said.  “Is he on the bus?”
“Nope!”  I said.  “We thought he was with you.”
“Why would he be with me?”  Michael asked.
“What’s your last name?”
He told me.
“What’s Robert’s last name?”
Michael repeated his own.
“That’s why,” I said.  “He’s your brother, Michael.  Aren’t you your brother’s keeper?”
He didn’t get it.  We climbed on the bus and after I chastised the students who claimed they saw Robert drive away I took roll again as we waited.  When Mr. Schmidt pulled up Robert climbed sheepishly abroad as Mr. Schmidt poked his head in to wish us luck.  I called out my thanks and wondered again that I get to work with a principal who would personally drive a student to meet the bus that he missed when I never even met my own high school principal.  Then I turned to Robert.  “You owe Mr. Schmidt something delicious on Monday!” I said.
“We discussed it on the ride over,” he said as he unloaded his luggage into the seat in front of him.  “He told me I could pay him back by winning first place.”
“Well, you better make sure you do that!” I said.
And, dang it, he did: 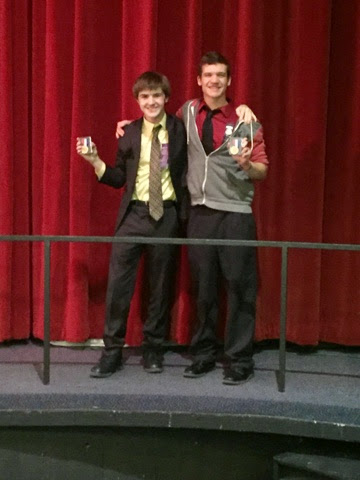 He texted Mr. Schmidt right after the awards ceremony, just to let him know.