In my flurry of I-have-wifi!-quick-post-all-the-pics! yesterday I skipped this entry by mistake.  Apologies for the disorder.  Please to enjoy this summary of our morning two days ago:
One great thing about Moscow is the metro stations.  They’re large and lovely, each taking on a different decoration theme, right down to the light fixtures.  Here’s a quick shot of the one near Carolyn and Dean’s place: 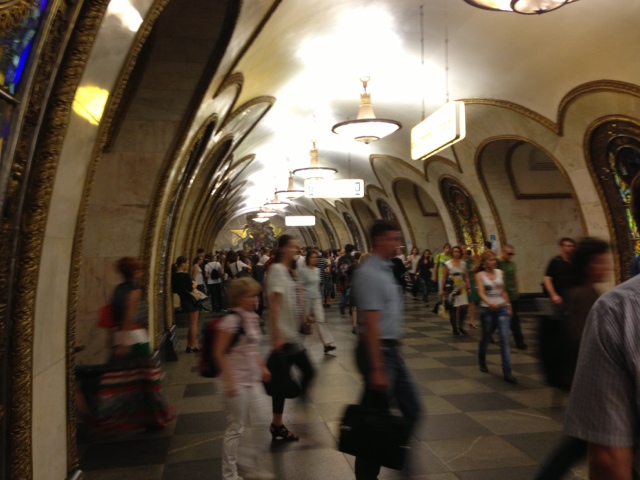 And a “World Peace” mosaic on the back wall of one of them: 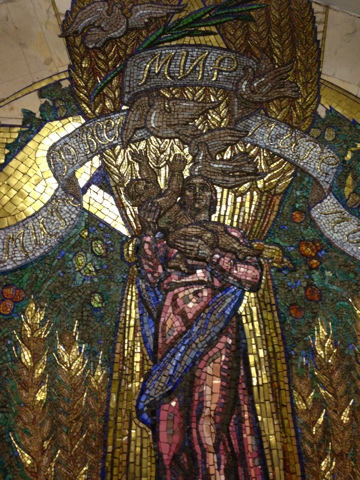 Carolyn is surprisingly passionate about memorials and statues, the more war-centered the better.  As a result, the first site we got to see in Moscow was not St. Basil’s or the Kremlin or even the city center.  Nope, our first stop was the Great Patriotic War Memorial. 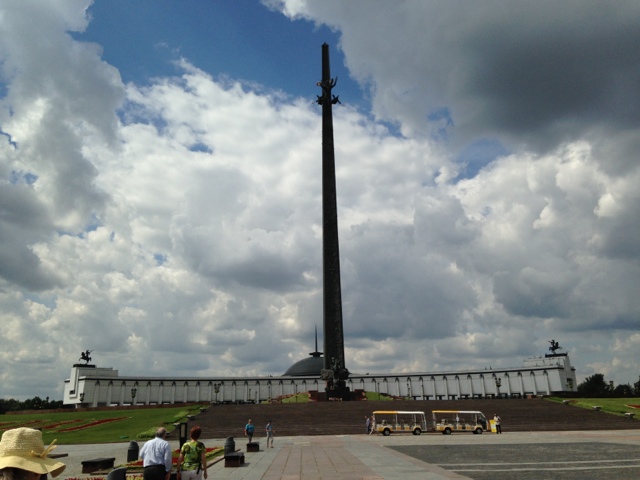 Carolyn had warned us to wear our walking shoes, and when we stepped out of the metro and saw the memorial across a long concrete walkway waaaay in the distance, I suddenly remembered how Russia can feel so expansive.  Sometimes it feels like the country is stretching, mid-yawn, luxuriating in its space.  I mean, look at this: 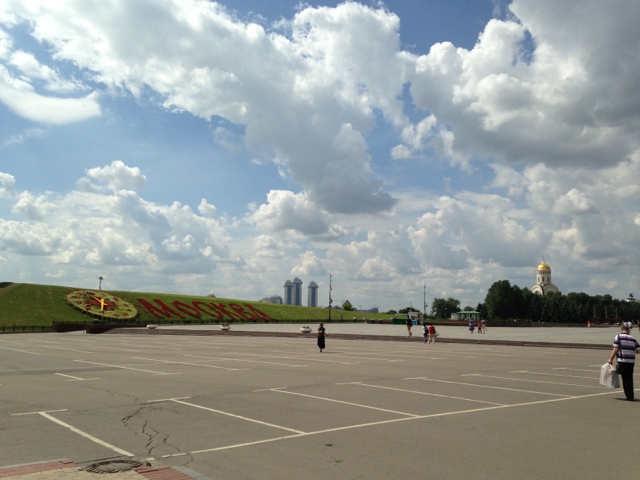 Maybe it’s the lack of mountains.
In any case, after 9 hours of walking (or perhaps 15 minutes), we finally came to the obelisk to beat all obelisks: 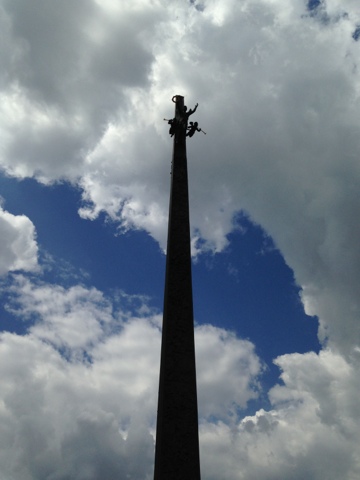 At the top there is an archangel with gold wings and hair and two buddies at his side.  Because of course there is.
The entire pole is carved with scenes and names of WWII (aka The Great Patriotic War) battles in that Rockefeller Center-Art Deco-highly angular style.  And at the base is a sculpture of a St. George slaying a dragon whose innards seem to be a bunch of swastikas.  Because of course there is. 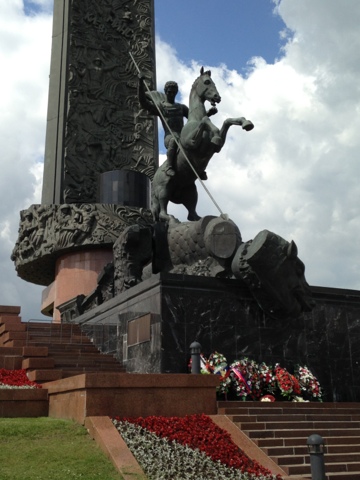 There’s a museum behind The Obelisk (it feels like it should be capitalized) that included a hall filled with delicate bronze chains hanging from the ceiling, many with glass teardrops at the bottom. 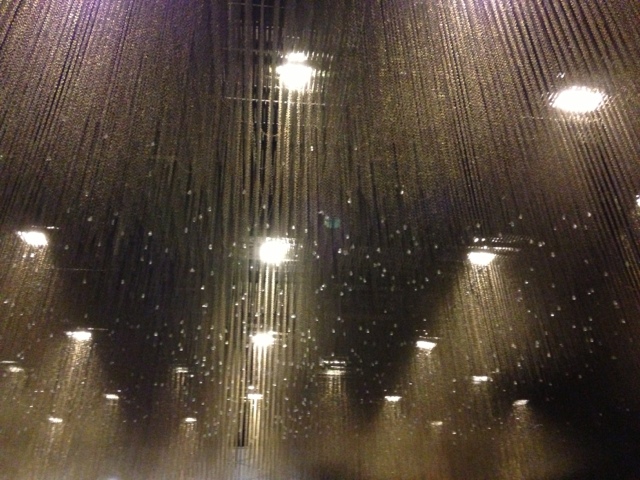 There are 2,600,000 pendants in total in this “Hall of Memory and Sorrow”, to represent the 27,000,000 Soviets who died in WWII, more than any other nation.
There were also a lot of school groups, and we squeezed between the hordes of 5th graders to see the dioramas that Carolyn was so enthusiastic about.
There were several rooms, each dedicated to a different scene in the war, like the troops marching through Red Square or the blockade of Leningrad.  The rooms each had a curved wall painted with actual, tangible sets in the foregrounds to bring the scenes forward. Some of the rooms included sound effects as well. 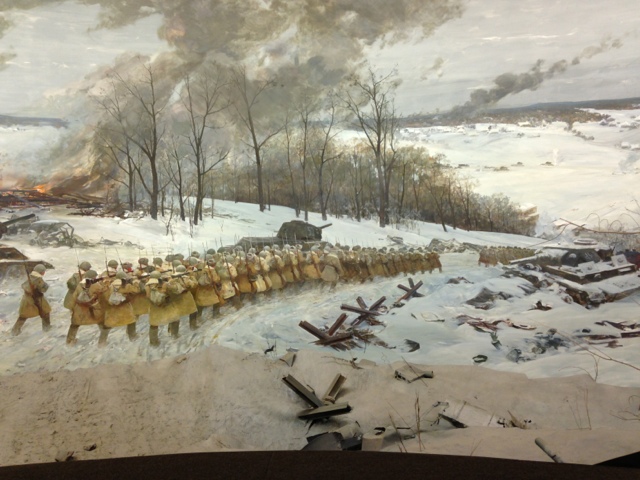 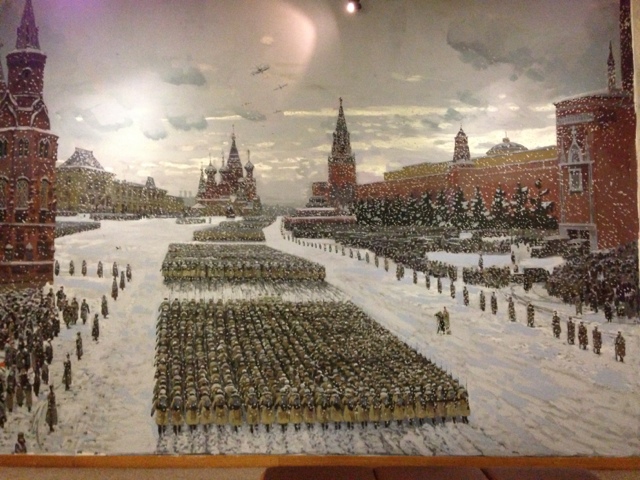 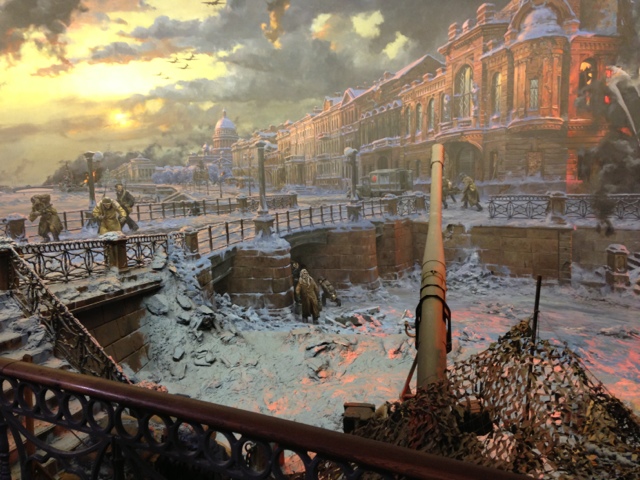 Sobered but also hungry, we exited through this large hall to the outside: 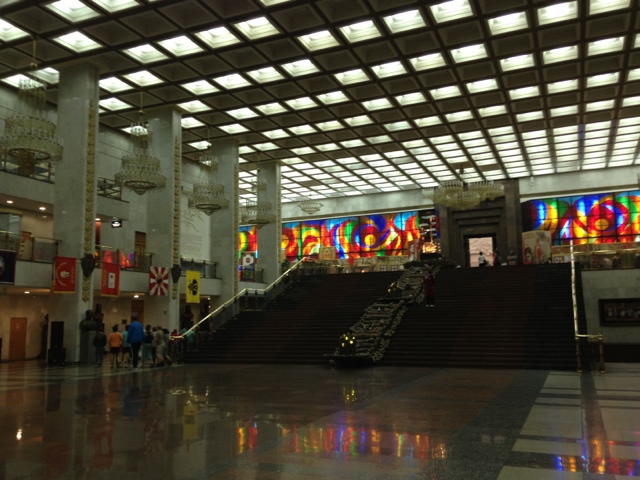 There we each got a baked potato from one of the many potato food stands leading up to the monument.  Picking the toppings was a bit adventurous since there were no pictures and I could only recall the word for cheese.
They were tasty, though! 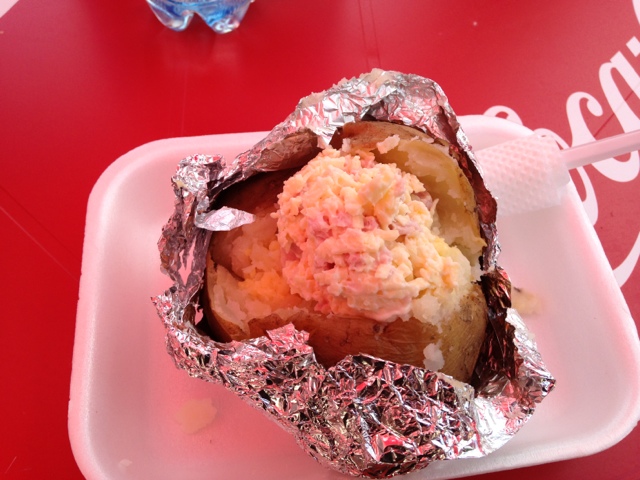 We took the subway back to their neighborhood, then caught the tram after a bit of waiting: 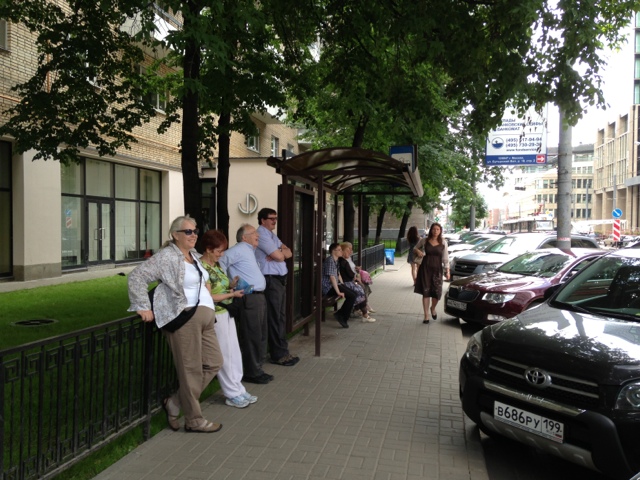 Dean headed back to their apartment to do some work, while Carolyn whisked us to the nearby Museum of Jewish Culture and Tolerance just before they closed for the Sabbat. 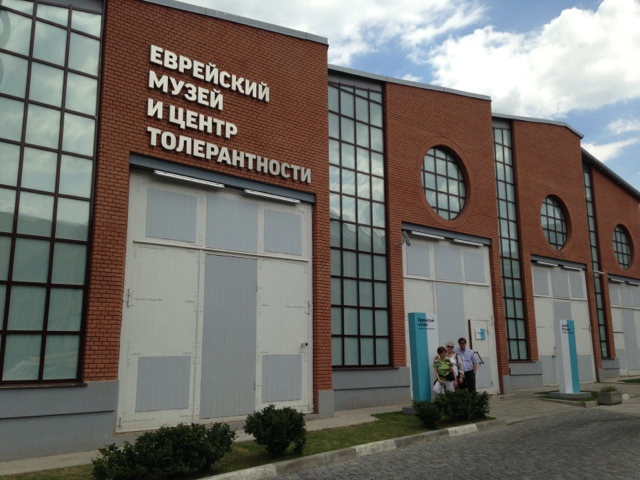 She insisted we had to see their introductory movie.  We got tickets and were shown into a theater with very nice cushy chairs arranged in rows in a circle. Movie screens lined the walls, so every seat was facing at least one screen while in the center was a large table-like circle that looked as if it could host a hologram.  We were also handed 3D glasses.
The movie began with words in Hebrew, Russian, and English drifting off the screens at us as a voiceover described “in the beginning…” (with English and Russian supertitles).
Essentially, the short filmed summarized Genesis – from the creation through Moses getting the commandments.  As God separated the waters from the land, though, our chairs suddenly started to rock from side to side.  We careened through the Garden of Eden and the plagues of Egypt.  We also got rained on in the flood, shot at by onscreen arrows and rocks, and felt the locusts swarm around our legs through puffs of air.  It was a 4D experience, like the Muppet movie at Disney World or the LILO and Stitch experience.
And I tell you what- it totally beat our church’s movie about the creation. The temple would be a lot more fun to go to if it involved 3D glasses and hydraulic chairs.
After the movie we had about 10 minutes to walk through the rest of the museum. It’s brand new, having just opened last year, and it’s well put together and downright splashy with it’s technology budget.
Also creepy monochromatic mannequins. 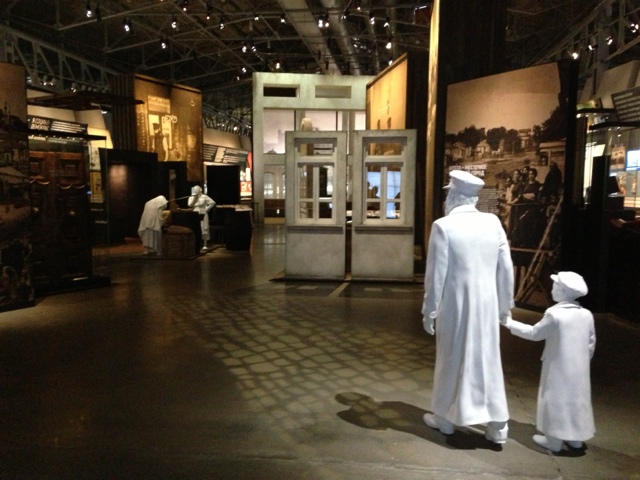 Because of course there is.