We celebrated my first Saturday here with a double header.  First up: Noel Coward’s Present Laughter at the Old Vic.

The main draw was to see Andrew Scott (of Sherlock and Fleabag fame), and he was phenomenal.  It was also a show that made me appreciate the talents of a good director, especially when I got the original script later.  My suspicions that they flipped the genders on a few of the characters were confirmed when I read it, and I think this was an excellent move.  It elevated the scandal of the main character’s affairs to have the first be your typical ingenue and the second be an older man (although the actor they cast in that part really wasn’t suited for it).  It was a strong and simple way to keep the play from feeling dated.  A few of the lines didn’t quite work (having the wife of the pair be the show producer, for example, just didn’t sit right in this period), but I really like the risk they took.  Additionally, the director’s work really shone in the quieter moments – the wife’s facial expressions at the end and the seduction scene, which was set over innocuous dialogue about theaters in London.  They also ended the play about half a page early, leaving it on a much more ambiguous and thought-provoking note than the original, farcical ending.

In addition to a super-interesting production, the bathroom situation at the theater is remarkable.  I had received an email prior to the show cautioning that there would be bathrooms available “across the way” as the current facilities were under construction.  Based on the flyers hung in the ladies’ loo, I assume these improvements will be welcomed by the Old Vic’s patrons:

“Across the way” did mean outside the theater, but they went all out.  There were three blocks of women’s rooms to the single men’s room, and the entire thing was connected to the theater by a styled hallway:

The woman in the orange vest is an usher holding a bucket of chocolates that they offered to every person who “skipped to the loo,” as they termed it.

Between shows we grabbed a bite to eat and chatted a bit with Justin:

That evening we went to see La Fille du Regiment at the Royal Opera House. 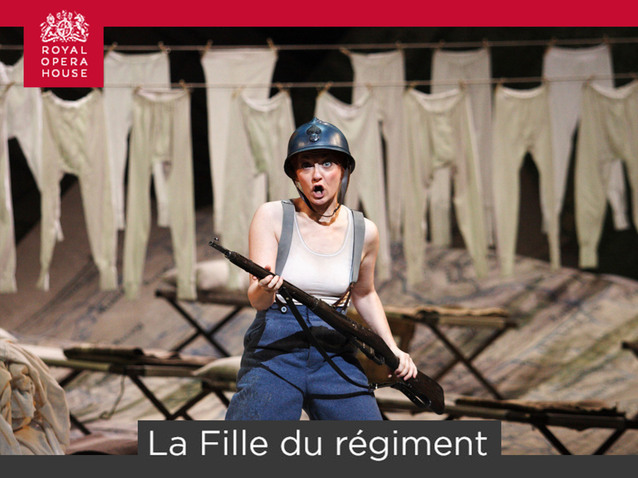 I have never seen a show there.  Jason pointed out the recent improvements/expansion, and it does provide a much better space for patrons to enjoy drinks and such at interval, as pictured in the atrium to the left here:

The opera is a light comedic one, and this production leans heavily into it.  You could easily see how this type of show lead to Gilbert and Sullivan’s pieces, and they played a trio in the second act very much like “It Doesn’t Really Matter.”  (Go ahead and try to stop watching that clip after starting it! 🙂 )  The regiment was just a few head waggles away from the Tarantara Cops.

What made the show, though were the absolutely delightful leads, both stunning singers and utterly charming.  I mean, look at the tenor!  How cute is he?! 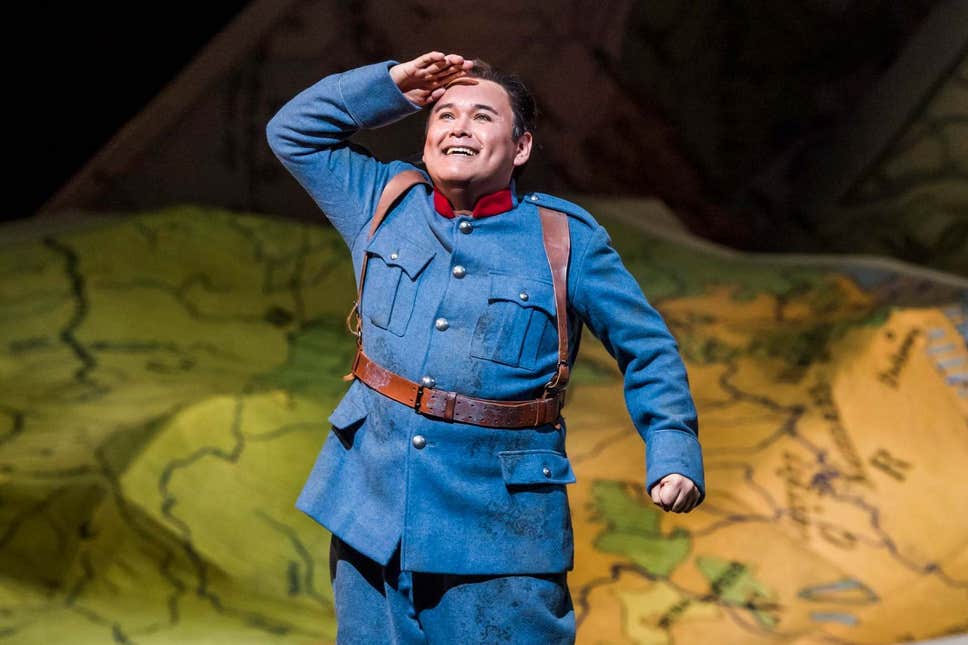 To our delight, he gave in to the audience’s demands and performed an encore of the “Ah, mes amis” aria, making this the second time Jason and I have lucked into such a thing!  I love it.  The whole audience gasped with absolute joy when he bashfully nodded to the conductor and reset his position.  He belted those high Cs just as beautifully the second time.  Here he is doing it in the same production at the Met (I’ve set the video to start at the high part at 5:51).