Morning Lecture: Dr. Muhsin al-Misawi
Topic: Classical Arabic Poetry
Interesting Thing: Early classical poems (classical as in 6th century AD-1000 AD-ish) include what’s called “The Erotic Prelude” (“Nasib” in Arabic), which involves a desert setting where the narrator going searching for his love and finds the encampment deserted, then launches into a “nostalgic ode.”  For example, this opening from a poem by Imru al-Qais:
Stay! let us weep, while memory tries to trace
The long-lost fair one’s sand-girt dwelling place;
Though the rude winds have swept the sandy plain,
Still some faint traces of that spot remain.
My comrades reined their coursers by my side,
And “Yield not, yield not to despair” they cried.
(Tears were my sole reply; yet what avail
Tears shed on sands, or sighs upon the gale?)
Also?  There’s a surprising amount of drinking and sex talk (both gay and straight) in medieval Arabic poetry.
Afternoon Lecture: Zohra Saed
Topic: Langston Hughes’ Notebooks and Photographs from Turkestan
Interesting Thing:  In January of 1932 Langston Hughes was a part of a group of African-American artists, actors, and writers who traveled to Leningrad to work on an anti-racism film.  Apparently, the film was not so well researched, given that it reported that the KKK is a group who rescues young black men.  Hughes tried to help rewrite the script, but when his efforts were rebuffed the group moved on across the continent instead. Hughes wanted to tour Central Asia, but the tour organizers couldn’t make last-minute arrangements.  So Hughes hopped off their (still-moving) train when it passed through a rural village in Turkestan, bringing only his record player, records, notebook, and pencil with him.  He then spent 6 months traveling around the area, meeting other writers and locals.
Afternoon Reading: Sahar Muradi
Topic: Contemporary Afghan-American Writing
Interesting Thing: Sahar, a poet and the organizer of our institute, collaborated with Zohra on an anthology of Afghan-American writing.  One poem I found interesting given the frequent discussion of modesty in the church (and the discussion of how modesty is/should be discussed) included this section:

…My skirt rebels above my knees and I am reminded with a harsh slap to the thigh that my chastity is your honour.
My Chastity is Your Honour.
There is, it seems (doesn’t it?), so much power in the thin layer of skin between my legs.
That little bit of woman
scares
inspires whole laws and customs.
Our thinnest, smallest flesh demands such attention.
Imagine the demands of my whole person.
Imagine what our whole bodies could do.
– From “Astagfurillah (God Forbid!)” by Khalida Sethi

Particularly Good Food of the Day: A sandwich from a French-Creole cafe for lunch

Photo of the Day: Manhattenhenge! 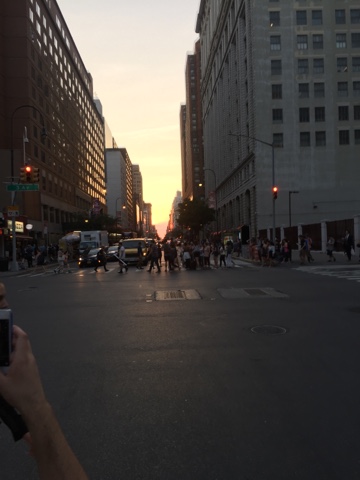