Last weekend was an absolute delight.  A semi-miracle, as you know, being less than three weeks from the musical and directly following the slow affliction that is Parent-Teacher Conferences and the stress of midterms.  By job woes aside, it was one of the best President’s Day Weekends I’ve ever had, and certainly the best Valentine’s Day for Jason and Justin came to town!

I picked them up at DIA late Friday night, and we behaved quite responsibly by going to bed by 3:00 AM or so.  I spent the first few weeks after Jason forwarded me their airline itinerary as proof of their intention to visit cataloging possible activities.  It would be Justin’s first time in Denver, but it’s mid-February and the performing arts options are slim.  I had a list of a dozen or so possible excursions and a plan to cram at least four of those into each day; and then I recalled the time Jason came to Denver for Christmas.  Granted, he was coming off an absolutely horrendous slew of work; but he arrived and declared his intention to simply take it easy.

And then he did.

Once I got over my astonishment that he had indeed suppressed his need to Accomplish Things, we enjoyed a leisurely few days in snowy holiday contentment.  It was lovely.

So I tucked my activities lists in the “just in case” section of my brain and announced to the boys that I was ready to just take it easy that weekend if they were game.

We kicked off Saturday with a trip to DenBisCo for brunch.  The wait was a long one, but they took down my number and promised to text when our table was about ready so we could wander.  We walked down to Tattered Cover enjoying the sights of Colfax (which was probably not the best street with which to introduce Justin to Denver) and got some hot beverages at the cafe inside while browsing some of their recommended readings for the Valentine’s weekend (and by readings, I mean a coloring book of hot men with various hobbies and low-slung pants).

Once we were seated at the restaurant, we ordered a cinnamon roll biscuit for the table.  I perhaps didn’t adequately describe just how big DenBisCo’s biscuits are, given Jason’s reaction: 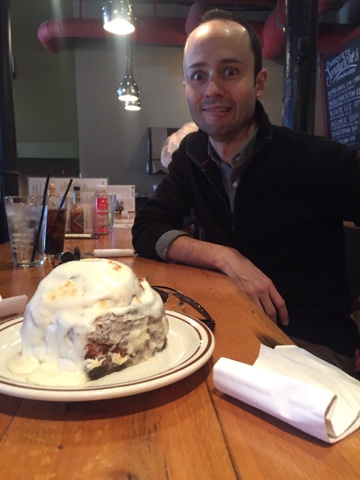 Still, it was delicious as always.  I had my usual favorite – biscuit with fried chicken, honey, whole grain mustard, and pickles: 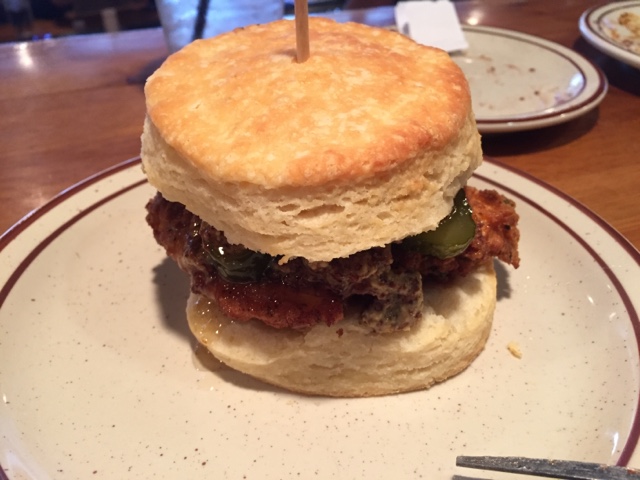 Jason wanted to revisit Ironwood, a funky store on Broadway, so we headed there to check out their latest odd decor selections and to check out some of the other shops.  Jason picked up an interesting fern at Ironwood, while I adopted a new favorite plant: 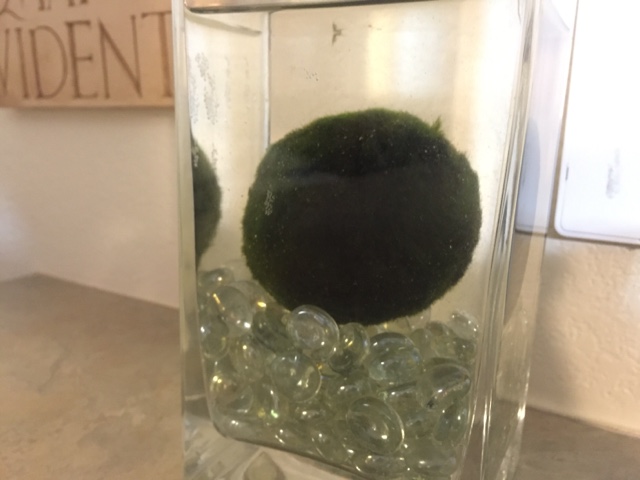 It’s a moss ball!
(Jason: It’s not moss.  It’s seaweed.
Me: I own it, and I say it’s moss, so it’s moss.
Jason: Rolls his eyes at Justin.
Later.
Jason: plaintively I want a moss ball.
Me: Rolls my eyes at Justin.)
It’s friendly and green and as adorable as any plant could be.  Best of all, the care for it appears to be “change the water once a week or so and keep it out of direct sunlight.”  Which means there’s a chance I won’t kill it!

With a bit of time left before our evening plans, we headed for the Red Rocks Amphitheater.  It’s less than 15 minutes from my house, and yet this was my first visit since this round of moving here.  The air was crisp, but the views of the city spread, the rock formations, and the fellow visitors were excellent. 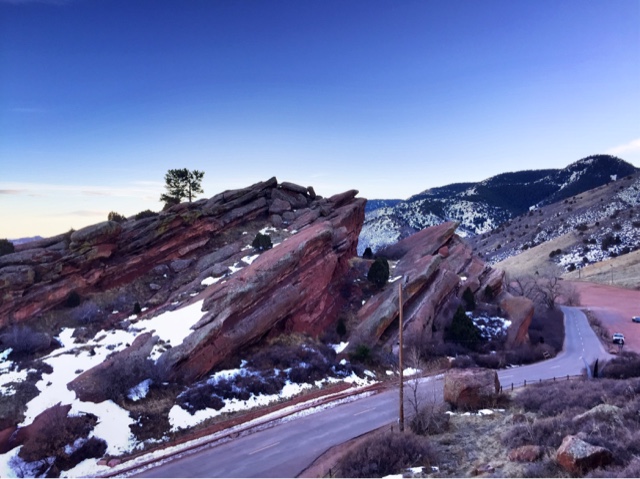 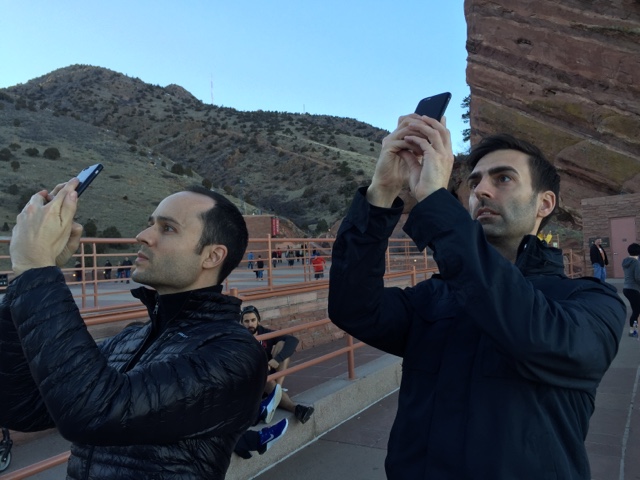 After Jason started getting lovely results, Justin and I began playing with HDR apps as well: 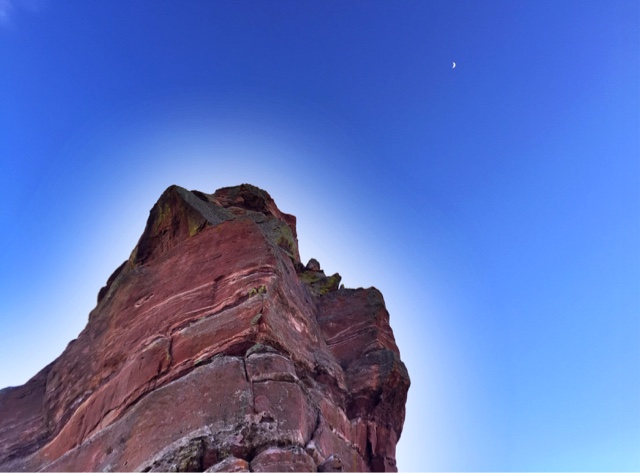 Not too busy.  Just some families, tourists, and enthusiastic exercisers: 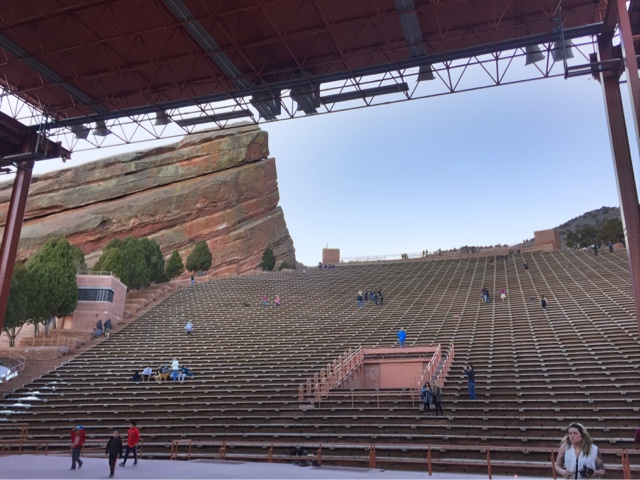 Including a couple in the corner just playing around: 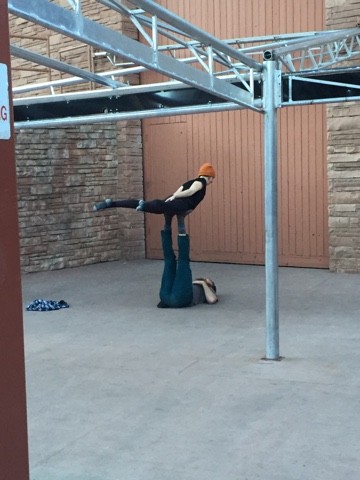 Saturday evening we met up with my family (Mom, Dad, Andy, and Jenn were all in town!) to see “Hail, Caesar!” at the Alamo.  Not my favorite Coen brothers’ movie, but it had some good moments and provided the stimulus for much discussion afterwards.  And this time we only stayed up until 2:00!

We were up and about earlier than usual on Sunday so we could go to church at my ward.  I was on the docket to teach Gospel Doctrine that day thanks to my own manipulations.  My co-teacher was confused when I specifically asked to teach a particular day rather than trying to get out of a particular day.  I didn’t explain my reasons (pride, a need to prove something, and a bit of a grudge) and just let him think of my devotion to my calling as further evidence of my spiritualness and light.

The lesson was full of discussion and interesting questions and man-splaining (“If you just go to the temple, you won’t have these questions any more!”) and I absolutely loved having Jason, Justin, my parents, and Andy and Jenn there to see me in my element.

After a bit of Sunday School Post-Mortem in the hallway, we decided to meet up with Rachel and co. for lunch at ModMarket.  From there, the Js and I headed to Boulder.  We wandered Pearl Street enjoying the buskers and oddities of Boulder, then found a new cheese shop called “Cured” to pick out several delicious items for a gathering at Fara’s house.

When I told my friends that the Js were coming to visit, their immediate response was, “Are you going to share them?”  They were all eager to spend time with them (and why wouldn’t they?), and Fara graciously offered to host a get-together at her house.  With a delicious spread of desserts (and cheeses!) and so many of the people I love all in the same place at once, the evening was the best way I could imagine spending Valentine’s Day.

The Js and I stayed late talking with Fara and Dave, as it is so easy to do, and their flight wasn’t until the afternoon; so we slept in a bit the next morning before venturing out to find one last meal.  We had less success there and wound up at Lucille’s.  The good thing about eating later than intended is we missed the crowds and could linger at our table chatting without guilt (or regret).

Then it was off to the airport to say farewell for now (but not for long – India’s in less than a month!  Eep!), then back to Bailey for me for another round of teaching and rehearsals.