The musical is chugging along right on schedule, which means I’m painting sets and making props in between teaching classes.  A parent volunteered to make us some stairs (hooray!), so I drew up some blueprints and he brought in a truck load of wood and power tools.  They’re almost done, so my students and I painted them during 1st and 2nd period today.
Like all of my sets, they are minimalist and designed for high reusability.  Such is the need when the only tools that came with my theater is a bent hammer and a broken drill.  Thank goodness for the occasional involved parent with construction experience! 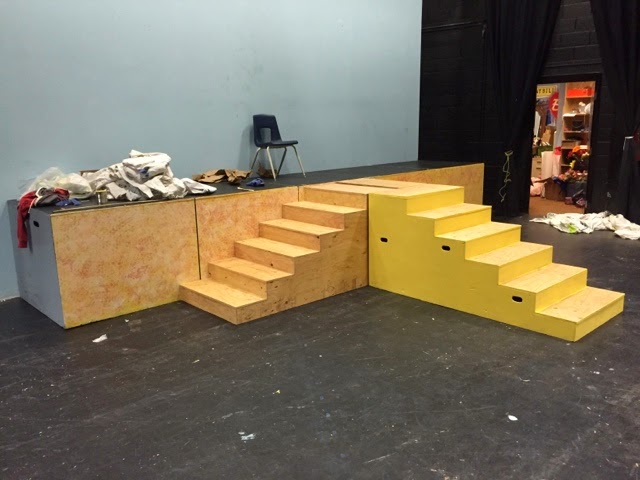 I told the cast earlier in the week that we would be cutting Friday’s rehearsal short this week, ending at 4:00 instead of the previously-scheduled 5:00.  “Why?” they asked, stunned at the thought of me giving them a break two weeks from the show.
“Because Waterhouse has ballet tickets,” I told them.
Cindy and I had tickets to the Colorado Ballet’s Masterworks program that night.  It also happened to be Rachel’s birthday, and when she told me that Ben was taking the kids to a hotel for the night so she could have the time off; I immediately insisted she join us for the show.
We started off with dinner at Euclid Hall in Larimer Square.  Known for their beer and house-made sausage, I’ve been wanting to try them for a while, and they did not disappoint.  The heavy food was delicious and perfect for the snowy night.

In Pieces (a contemporary work that premiered in 2013),
and Bernstein/Robbin’s Fancy Free

The Balanchine piece was lovely and complex.  The second movement in particular had the dancers weaving around and through each other in a way that was mesmerizing and I found myself wishing that I could watch many of the moments from the dance over and over again via the dance gifs I’ve come to love.  In Pieces was stunning.  The complicated choreography, the muscular yet graceful skill of the six dancers, the lighting design,  the men in modernist tutus – it was all right up my alley and exactly why I love modern ballet.  Fancy Free, in contrast to the other two, was sloppy and dated (and not in a happy-nostalgic way).  In fact, we were all surprised to see how the tale of three sailors looking to pick up women didn’t feel innocent and playful like On the Town (which was inspired by this piece), but instead felt demeaning and rape-y.

The first two pieces, though, were outstanding.
The much-anticipated snow was falling thicker and faster after the show, so we decided against getting some ice cream in favor of a quick parking lot selfie and safe drives home. 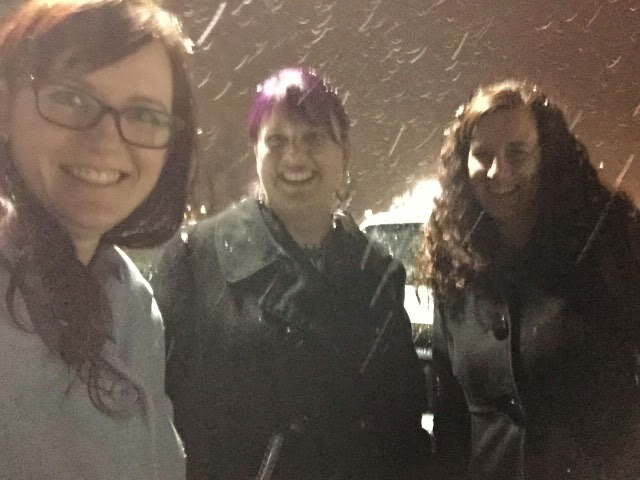