Thank Goodness for my Pioneer Spirit

Early last month I came to the Mountain Town condo after a play performance at my school. I went through the usual routine – turn on the power, turn up the heat, open up the closet on the balcony, and turn on the water.  Water immediately began gushing from the pipes on the wall, so I shut off the water, turned on the heat, turn off the power, and drove back down the mountain for the night.
I asked around school and found a plumber, but between my schedule and his the first time that we could both coordinate an appointment at the condo was yesterday.  I packed up my bags planning to spend the night at the condo once the water was repaired. Alas, after the plumber fixed three separate broken pipes, he discovered that the water meter itself had also cracked during the ice storms of December.   We called the local water company who promised me a 4:30 appointment the next day. With that I thanked the plumber, repacked my car, and drove back down the mountain to a confused Natasha.
This morning I loaded up my car once again, and after school/speech practice headed back to the condo to meet the water guy.
I waited.  45 minutes after the appointment time, I called him to see what was up. Once I reminded him of our appointment, he told me that he was standing “in a muddy hole at the base of the hill.” Apparently a major pipe was broken and at the moment the entire complex had no water.
He promised he would call me back in 30 minutes and let me know if it would be possible to get to my place today.
I waited. After an hour, I called him again. He said he still wasn’t certain but when I pointed out that I made arrangements specifically to spend the night here for this job, he promised to call me in 10 minutes and let me know what was going on.
He didn’t. I’ve been calling every 20 minutes to try to get him back on the line, to no avail. By 7:30 it was dark, snowing, and upon realizing that I was going to be there for the night without working pipes,  I had begun to gather snow in the biggest pots I could find to melt on the stove.
Fortunately, I stored a crate of bottled water here after the last time our pipes froze.  Thanks my travels I have extensive experience with brushing my teeth with bottled water, and thanks to Google I figured out how much water I need to manually flush the toilet. 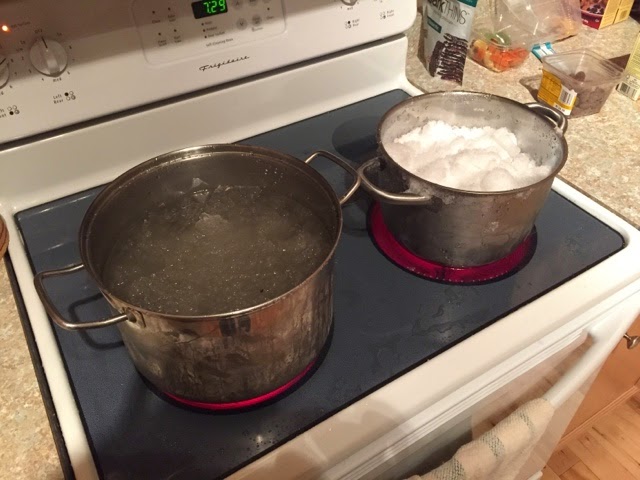 Really, between the fresh snow to melt; the working electricity, heat, and Internet; and the prospect of sleeping in an extra hour tomorrow morning since I’m already up here, I have everything I need for a pleasant evening.
Everything except a plumber who calls me back, that is.  I’m trying to stay empathetic – of course the lack of water to the entire complex is a bigger issue than my own broken meter.  I just wish he had the decency to keep me informed.
I don’t know whether to shake my fist at the sky and curse men, monopolies, or the uncivilized habits of Mountain folk.