After the food tour we headed back up to central Kyoto to visit the Imperial Palace: 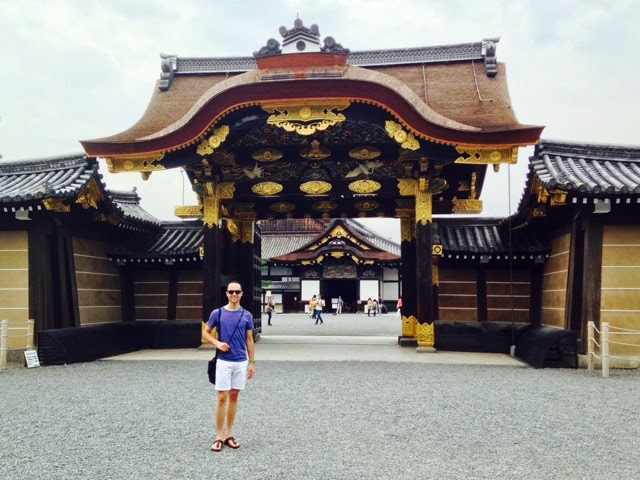 The main gate’s brighty-painted carvings and gold filigree create a stunning entryway into the palace grounds: 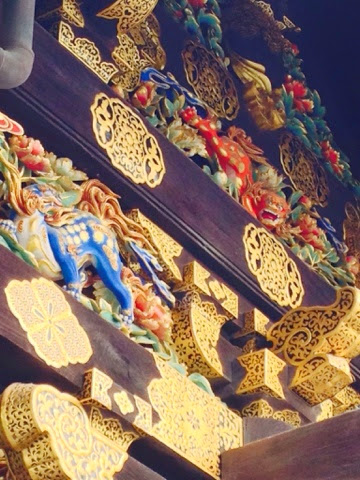 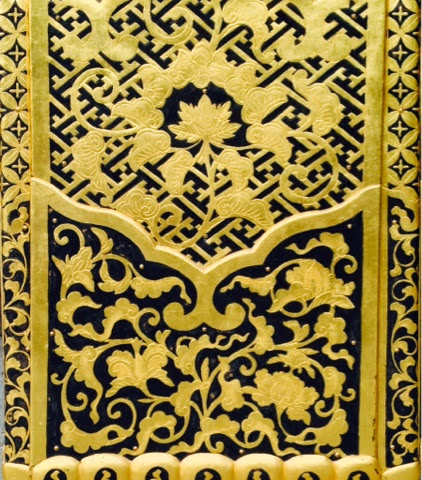 The main attraction of the palace, at least for us, were the nightingale floors, which Jason had read about in a book (“Tales of the Otori” – a (mostly) YA book history/mythology series set in kind-of Japan) and which I vaguely recall hearing about… somewhere.  Perhaps in a book of fables?
The nightingale floors are so called because the wood planks are joined to deliberately produce squeaks with every step, thereby warning the emperor of would-be assassins.
We took off our shoes and tucked them onto shelves inside this entryway: 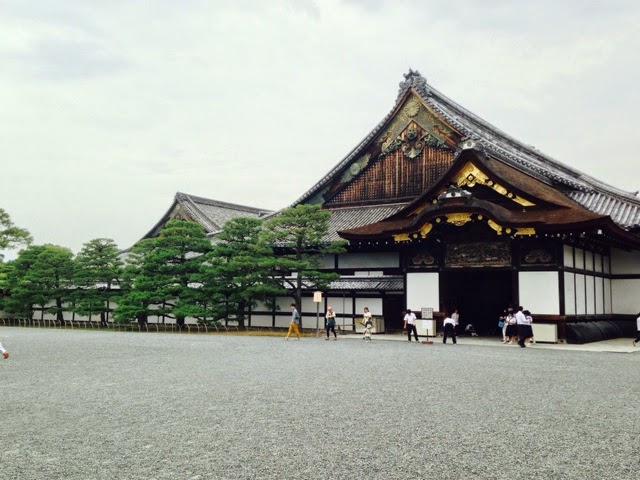 and made our way barefoot through the palace (where photos were prohibited).
This palace was burned/destroyed and rebuilt eight times since it was first established here in the 12th century.  The current main building was last rebuilt in 1855 in as close to the Heian style as they could manage at the time (“Heian” being the time period where Kyoto was at its peak as the country’s capital, a fact I learned thanks to a comment from Ben).
The layout and rooms were interesting to see, but I’m afraid Versailles and other such palaces of Europe make this one pale in comparison (like, vampires rubbing on skin-lightening cream and donning arm covers and parasols kind of pale).  It didn’t help that most of the famed painted screens here were either reproductions or removed altogether; leaving only the overall architecture of the building and the occasional historical scene reproduced by inevitably creepy mannequins to admire.  We did enjoy the chirps and squeaks of the floors, although they didn’t so much remind me of nightingales as mice.  We ran into similar floors in a couple of other places, and I made an audio recording of the effect.  I have no idea how to post an audio file via mobile blogger, but if you see me in person and want to hear it, I’d be happy to share.
The grounds and gardens around the palace were a bit more impressive, especially the areas structured around the manmade ponds and small waterfalls.  We admired them, although Jason beoaned the lack of meticulous upkeep (a la French gardens) and I bemoaned the mosquitoes. 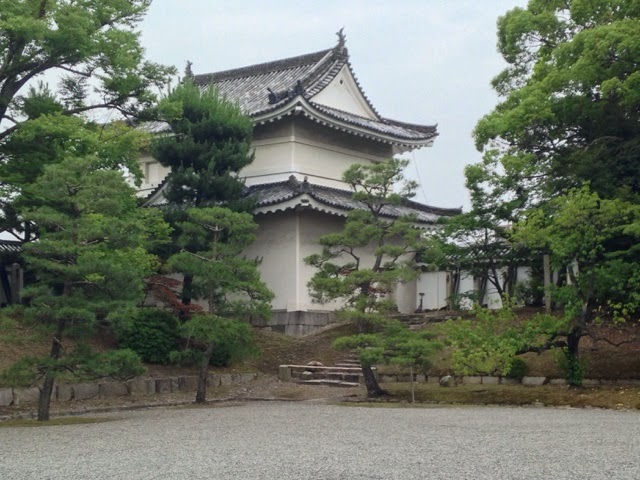 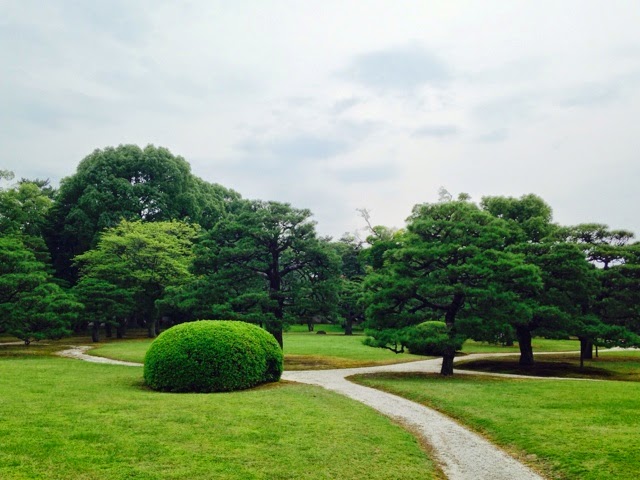 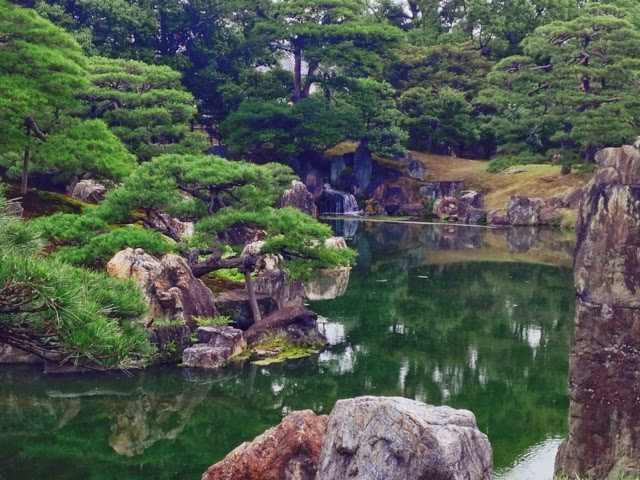 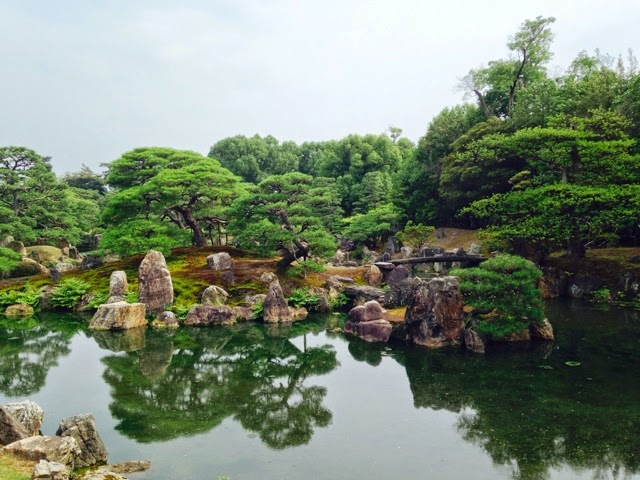 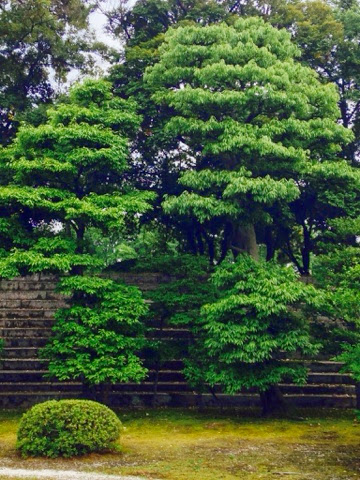 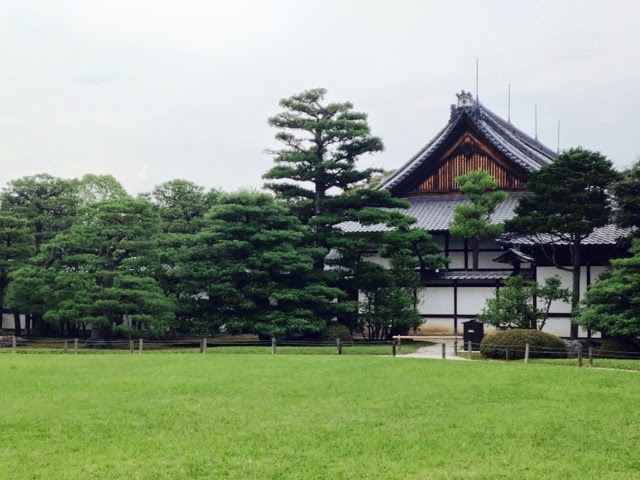 We left the palace grounds just before closing time and headed back to the Gion district, the famed home of geishas and “traditional” Kyoto.  We had some time to kill before our dinner reservations, so we walked through that neighborhood and checked out the sights: 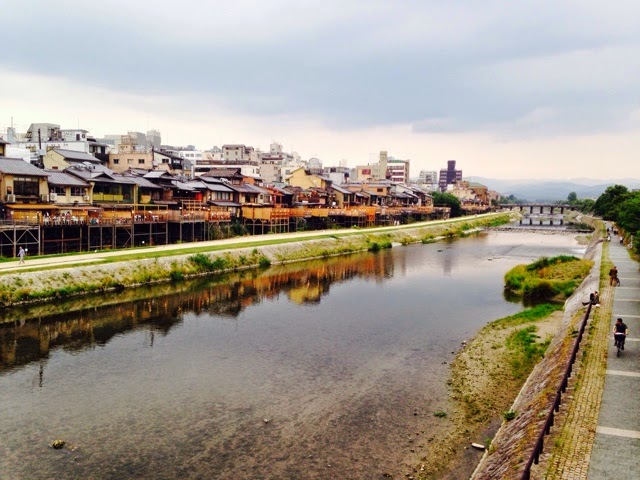 View of the Kamo River from Shijo Bridge 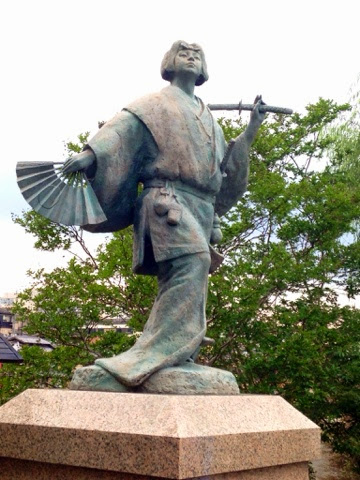 Statue of Okuni, the founder of the kabuki style of theater
(and you should be impressed – figuring out the subject of this statue required some pretty mighty Googling prowess.  It did lead me to discover, though, that not only was kabuki founded by a woman, but she ran an all-female theater troupe for several years in the 17th century – an impressive feat in both Western and Eastern theater at the time.) 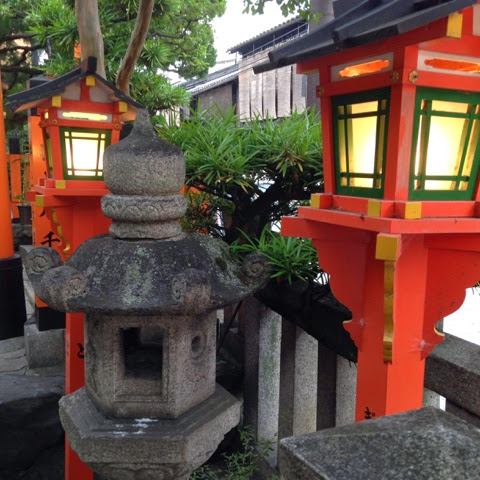 Lamps at a small shrine among the traditional streets of this district. 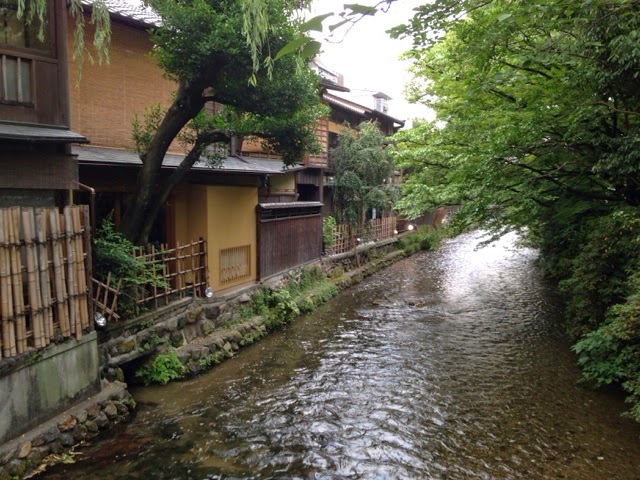 Traditional homes/ryokans (inns) along a canal 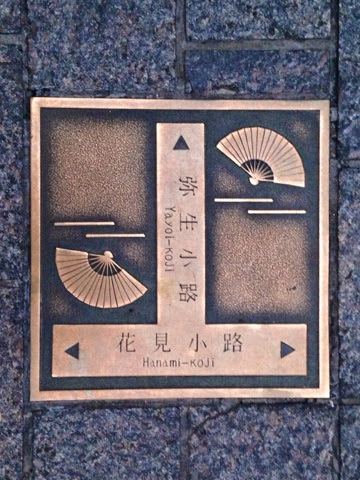 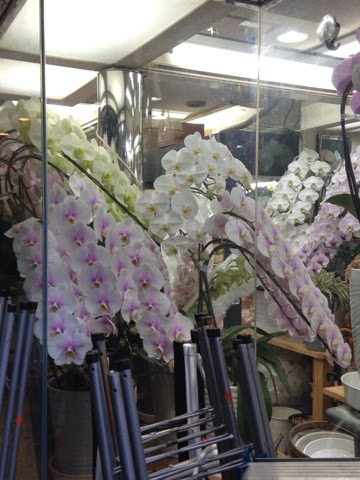 Orchids in a flower shop.  Aren’t they amazing?  The things you can do with flowers in a humid climate!
Walking through Gion took less time than we expected, so we decided to cross the nearby Yasaka Shrine off our list. 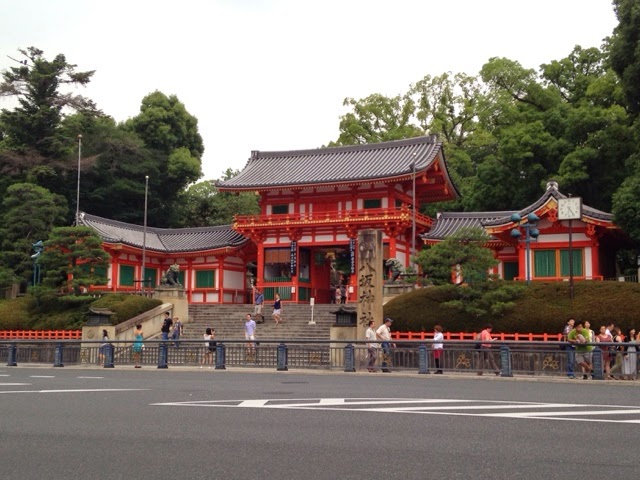 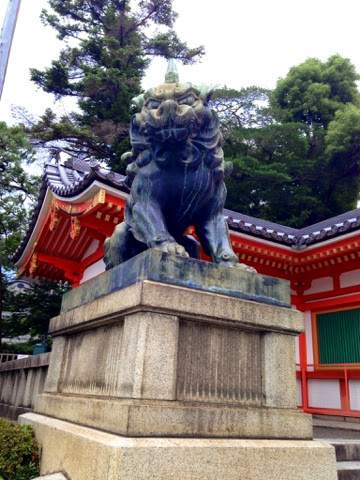 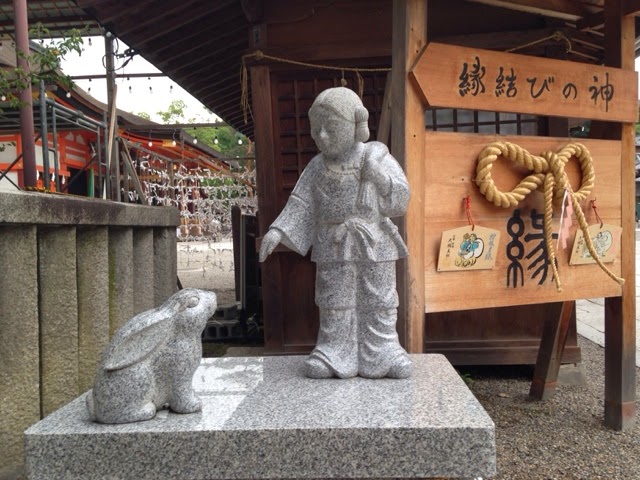 Statue of a child and a bunny 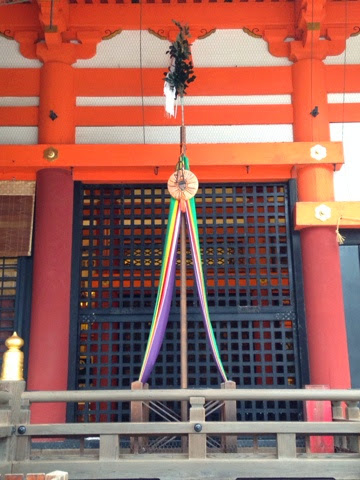 Decorated chimes.  Worshippers tug on the rope hanging down center to make the hammer up top hit the brass plate.  It makes a garish clanging sound that, according to one of my later guides, scares off demons. 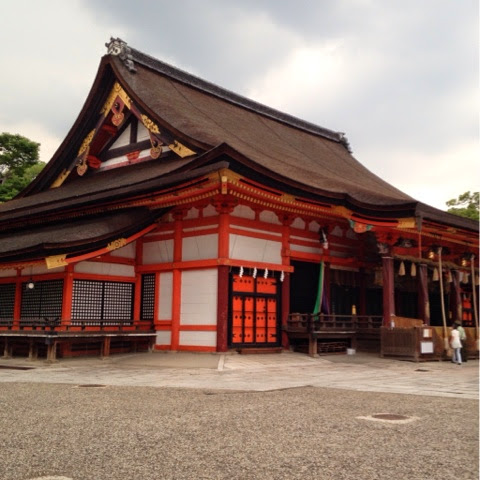 One of the temple buildings 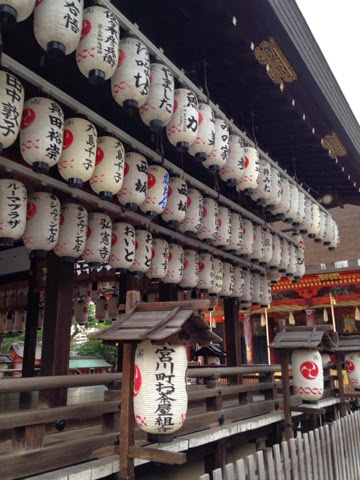 Paper lantern hall
When we finished wandering around the site (i.e. we declared exhaustion), we sat on the steps in front of it.  I’m sure we’re now featured in several people’s photos of the front gates, but we enjoyed the view of Shijo-dori, the main tourist shopping street in Gion: 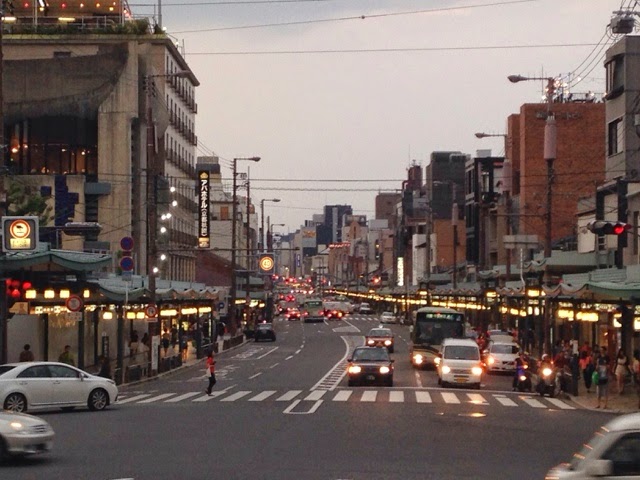 We eventually hauled ourselves up and headed down that street to find the Michelin restaurant our concierge had made reservations for us at, Nanba.
True to Michelin form, we had to wander past the (unmarked) alley way a few times and take at least one detour before we finally located the place: 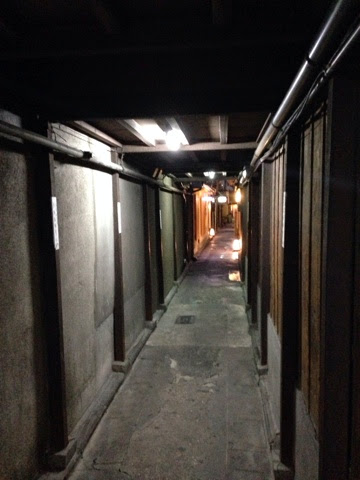 It’s not Michelin if you’re not worried you’ve wandered into a private residence, right?
Once we found it, the restaurant was tiny with only a few seats at a bar and two small private tatami rooms (out of sight to the right of this photo): 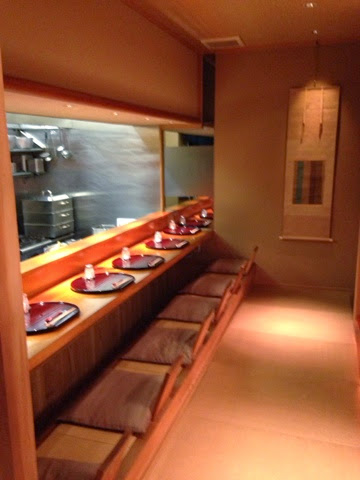 From the sounds of it there was a jovial group of women in the room next to ours.  From the feel of it there was a brisk draft throughout the restaurant.  I basked in the cool breeze while Jason made use of the provided blanket (or really fancy napkin?): 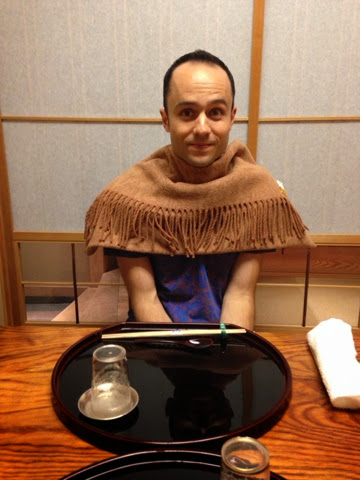 The waitress brought us course after delicious course, each time kneeling next to our table and flipping through a “Japanese Food Dictionary” (pictured below) to show us English descriptions of what we were eating. 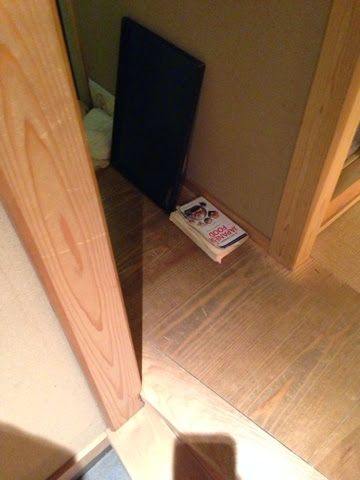 The food was tasty and gorgeous: 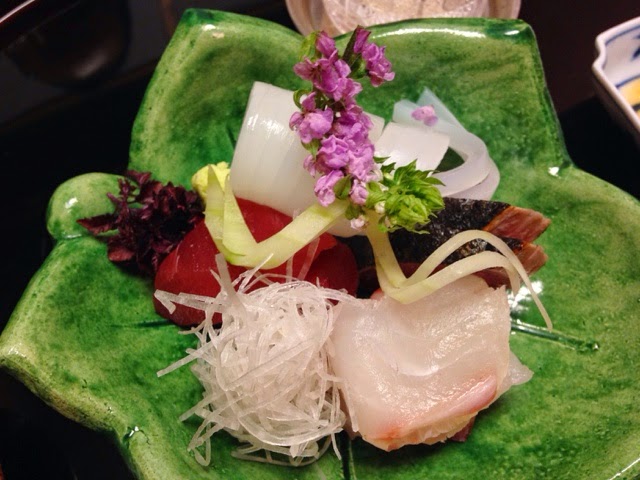 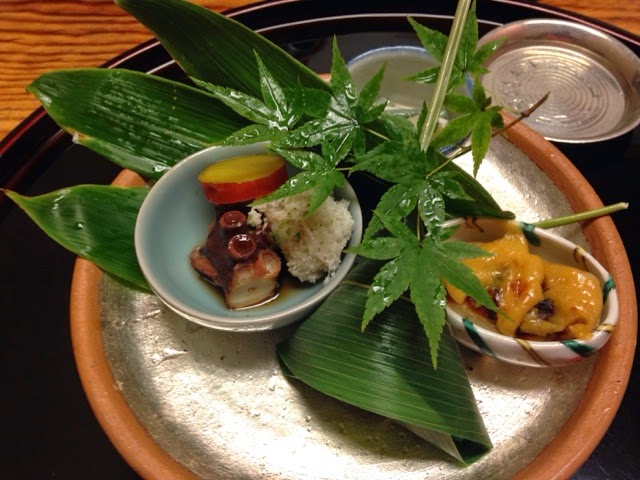 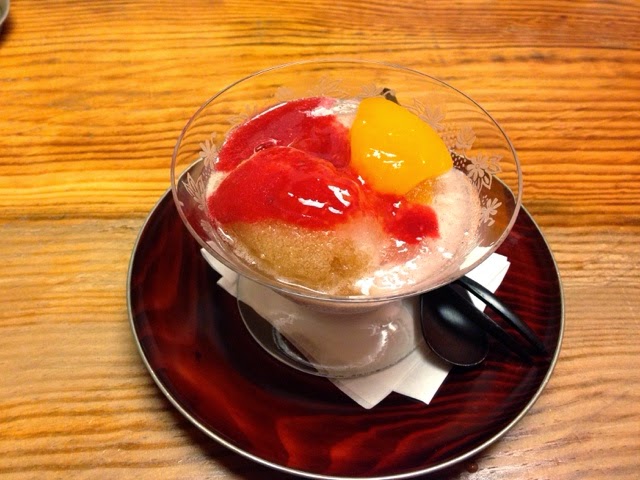