Let’s pause in the catch-up of Japan entries to take a look at the deliciousness that was today’s activity, shall we?
What does one do the day after a trip to Asia that included three Michelin restaurants, two food tours, and a cooking class?
A food tour of Seattle, of course!
Jason proposed this idea a while ago, and I was quick to agree that this sounded like a perfect way to spend the last day of his summer vacation.
Savor Seattle Tours (http://www.savorseattletours.com) offers a varity of tour options (I’ve mentally bookmarked their Chocolate Indugence Tour for future reference).  We picked “Gourmet Seattle,” which promised a 9-stop walking tour of Belltown, Pike Place, and downtown Seattle.
At 1:45 PM we met our tour guide, Nick; 9 Texans, three of whom are high school students visiting for a syncronized swim meet and the rest their chaperons and brother; and a lone guy from North Carolina at Yellow Leaf Cupcakes, just a few blocks from Jason’s apartment.  After our recent experiences, it was a little strange to go on a food tour in America with other Americans and an American guide.
The guide was great, though.  I could tell he would be good when 1) he showed up in a pro-bacon t-shirt and 2) his comment after asking where each person was from was always a recommendation for where to eat upon returning home (“Denver!  Have you been to Hapa Sushi in Cherry Creek?  You gotta try the roll with the inappropriate name.  You’ll see.”) (Side note:  I looked at the menu, and I’m still not sure which one he was referring to).  He was funny and super-gregarious, greeting friends and making new ones (from new waitstaff to other customers) at every stop we made.
Speaking of, here’s the run-down of where we went and what we ate:
Stop #1: Yellow Leaf Cupcake Company 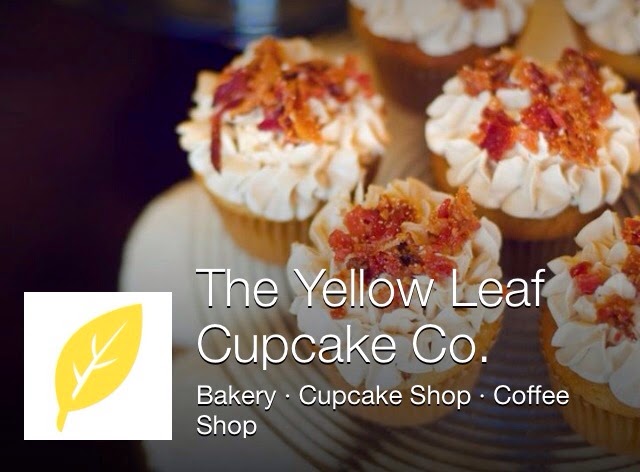 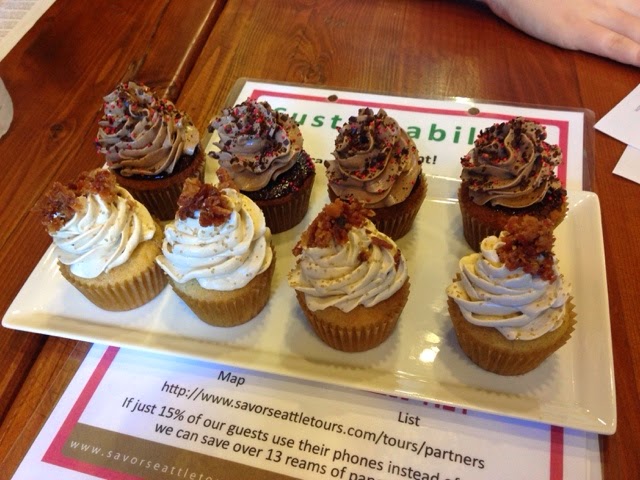 He also bragged about their customer stats – over 50% of their customers are men, something they set out intentionally to do by not designing a store that feels like “you’re walking into a little girl’s bedrooom.”
(Rachel, Miranda, I was totally thinking of you the entire time I was in here.  You two would love this place.)
I ate my cupcakes my usual way, by breaking off the bottom and inverting it on top to sandwich the icing.  Nick leaned over to me while I did so and said, “Nice technique.”  I was further vindicated (and had my good student/good foodie ego stroked) when one of the Texan men told me on the way out, “I noticed the way you were eating your cupcake and told Nick he should rib you a bit for it.  He told me that you were doing it right.  So, good for you!”
Stop #2:  Serious Pie 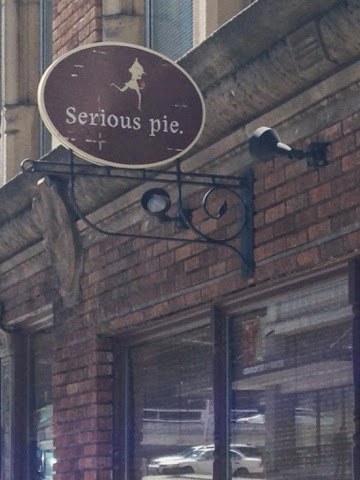 One of Tom Douglas’ restaurants (who is apparently a big deal on the Seattle food scene), we sampled two of their pizzas: 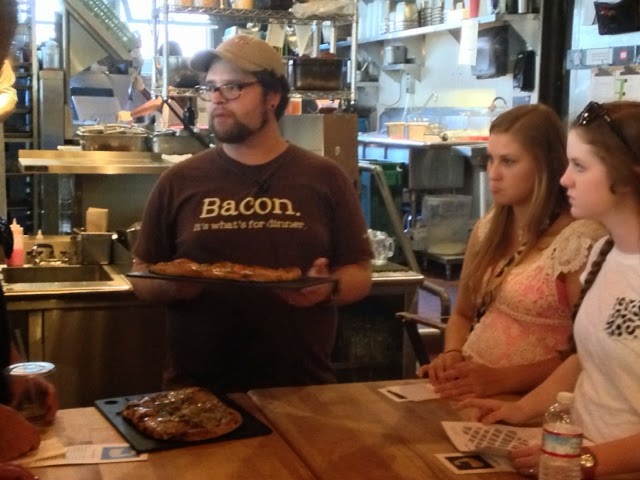 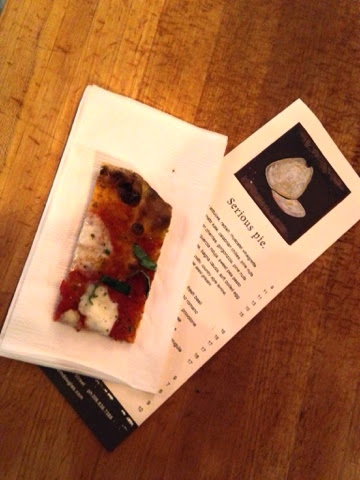 and the mushroom (with two kinds of mushrooms baked in, and a truffle cheese on top) 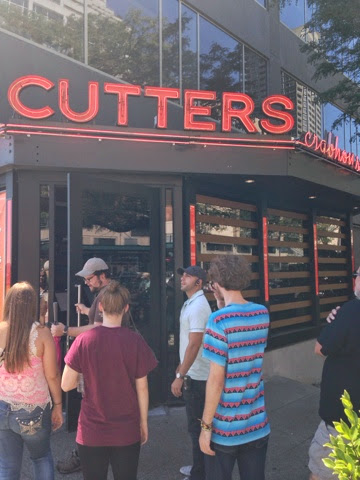 With great views of the water, while the others enjoyed some white wine Jason, the high school students, and I had pomegranate mint mojitos: 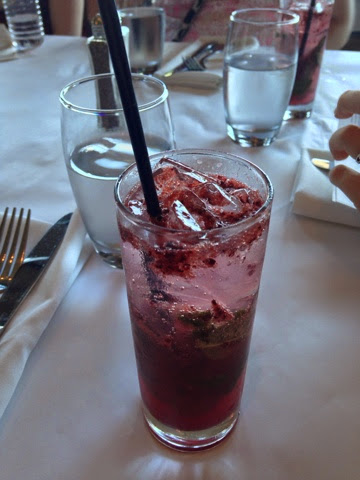 and everyone enjoyed a crab-stuffed prawn with lemon buerre blanc: 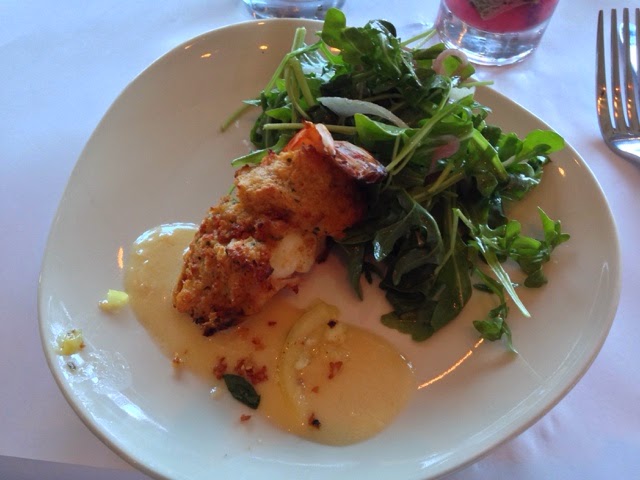 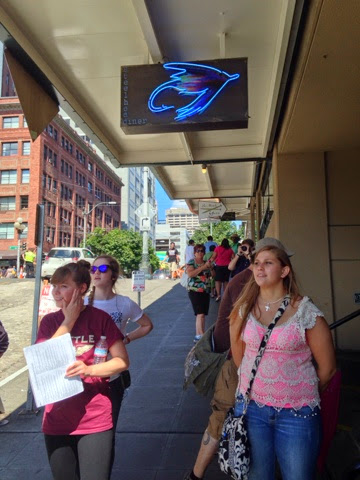 More wine for the drinkers, razor clam chowder with white truffle oil for all: 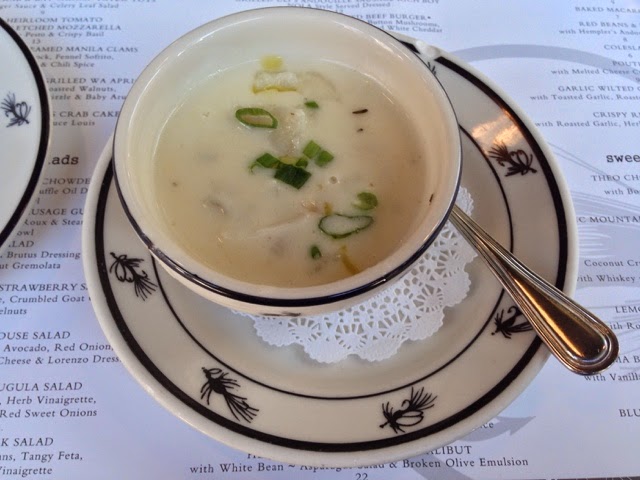 Into the market next for
Stop #5: La Buona Tavola 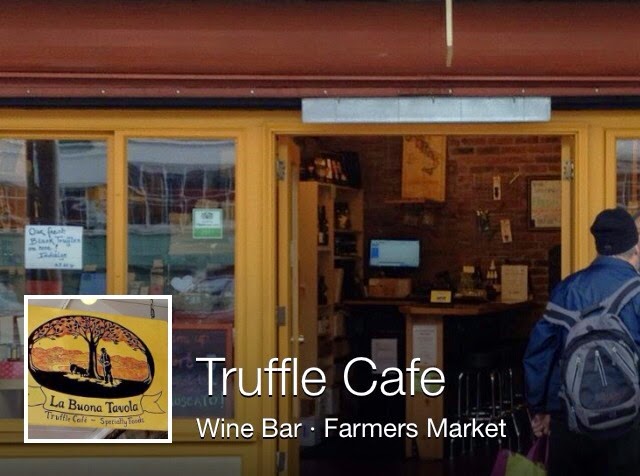 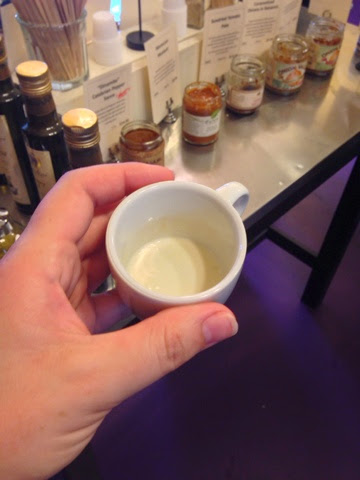 and then with white truffle oil drizzled on top: 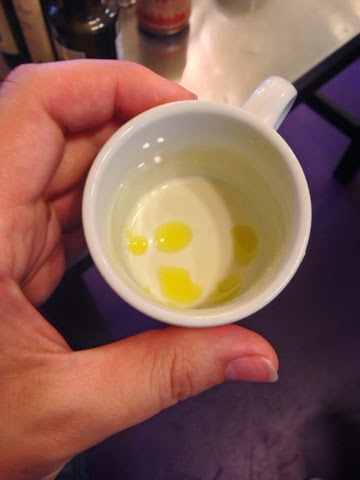 We also licked the back of our hands to try truffle salt: 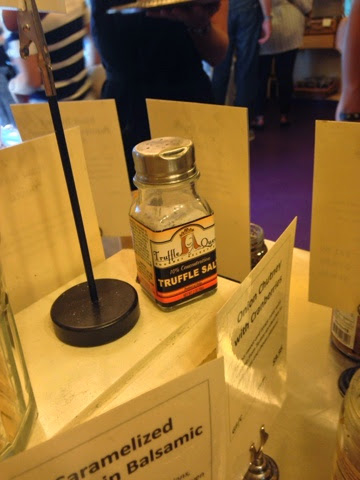 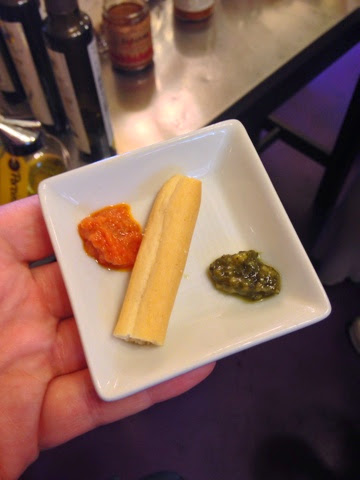 and licked 15 year-aged balsamic vinegar off the back of our hands: 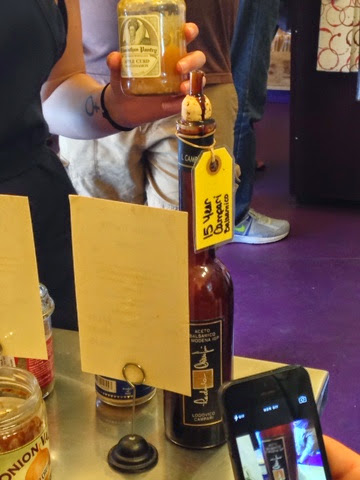 Nick gave us a few minutes to try out some of their other samples: 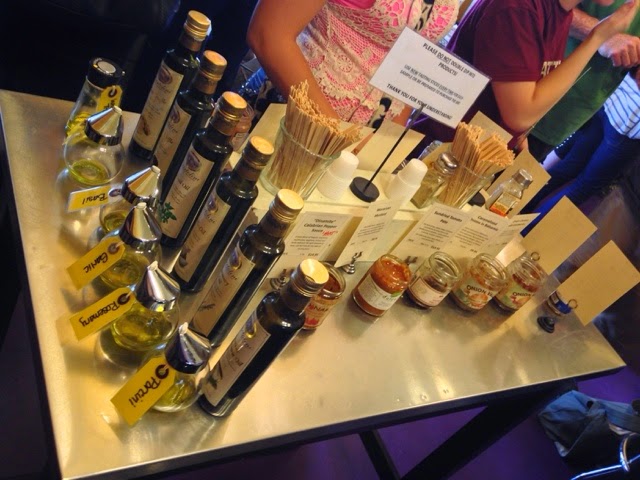 Jason and I came back later so I could pick up a jar of their goat milk bourbon caramel sauce and the raw basil pesto.  I may or may not be sharing these with book club later this week.  🙂
Stop #6:  The Pike Brewing Company 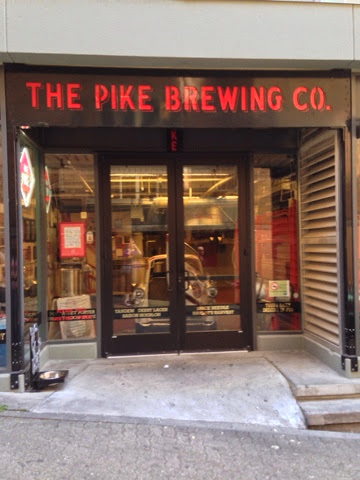 The drinkers had two beers to sample; we had two kinds of cider – honeycrisp apple (on the left) and apple raspberry.  We also had sausage, mustard, and a spent grain roll (plus a radish slice as a palette cleaner), all made in house. 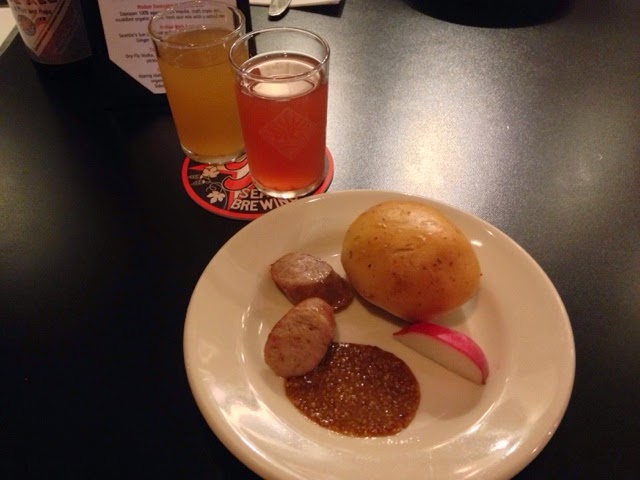 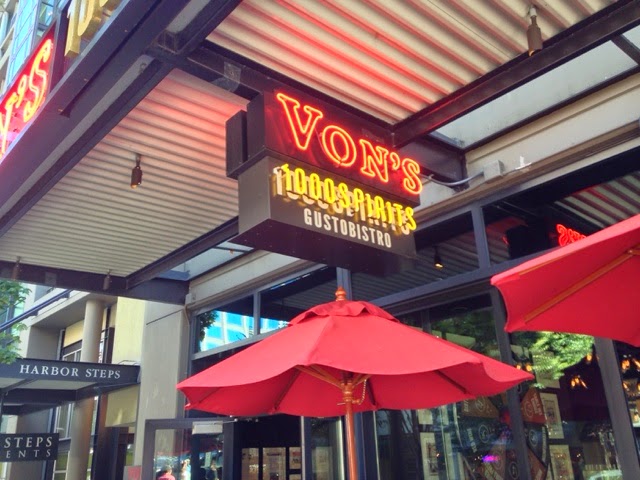 Kitty-corner from the art museum and over 100 years old, this place specializes in sourdough recipes.  Nick teased us with talk of sourdough pasta and sourdough beingets, but our sample here was a wild coho salmon cake with sambal aioli and arugala salad: 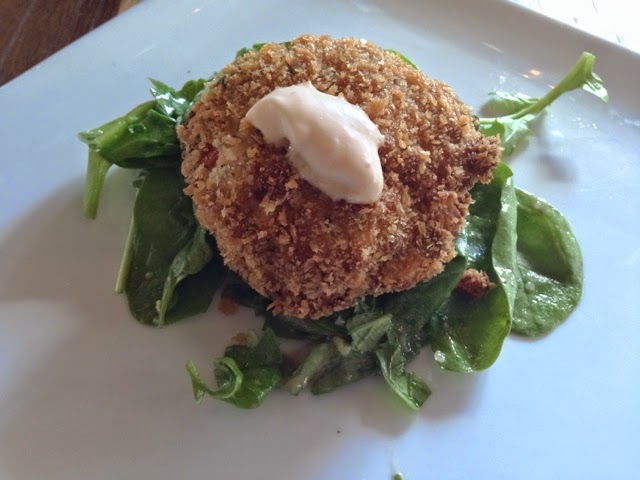 Up and over a few blocks was our final stop.
Stop #9:  Gelatiamo 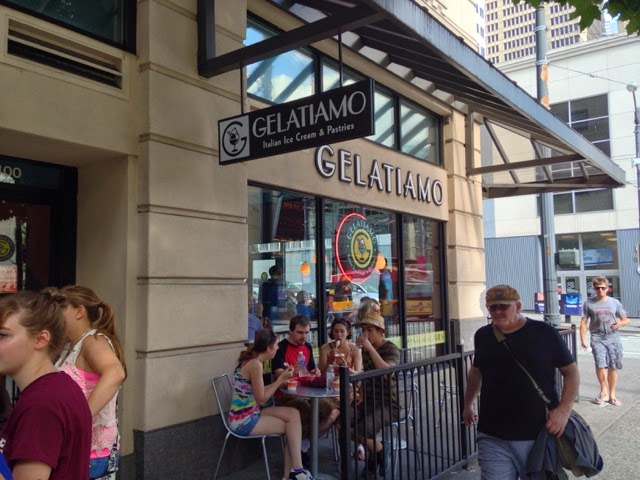 At this “authentic Italian gelateria”, Nick told us about the difference between ice cream, gelato, and sorbet (“Sorbet is the celery of frozen desserts.  Eat all you want.”). 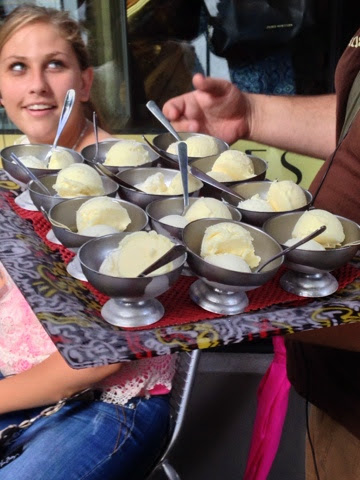 We tried the pineapple sorbet and a scoop of vanilla gelato: And that was it!  It was a delicious way to spend the afternoon, and it provided great information about Seattle.  Quite business/tourist-savvy, they also provided us with a map of the tour we took today and a list of all of the restaurants and shops they partner with for this and their other tours.  We also got VIP cards that will get discounts and deals at those stores for the next week or so.  When we went back to La Buona afterwards, they remembered us from the tour and gave me 10% off my purchase without me even having to show the card.
I don’t know about Jason, but I’m a lot more excited about him living here after this tour.   🙂