One of my goals for this trip (as it is for any trip) was to see some performing arts.  As is tragically often the case, we were traveling off-season.  Ballet, opera, theater – everything I looked for and wanted to see in Tokyo was closed for the summer.
In my searching, though, I came across a photo of the concert hall at the Tokyo Opera City.  It looked gorgeous, and I immediately decided that there I must go.  So I waded through many a confusingly Google-translated website and finally discovered that there was a symphony orchestra performing in that space while we’d be there.  Several emails between me and Japan later, we had symphony tickets!
At the appointed time we headed down the metro, and then realized that we were on the wrong tracks.  We couldn’t go through the automatic turnstiles with our already punched tickets, so we went to the ticketing agent they have at every set of turnstiles.  I explained that we went the wrong way.  He confirmed the missed direction, handed me a laminated card that stated “Please hand staff this card at other ticket gate,” and waved us through. 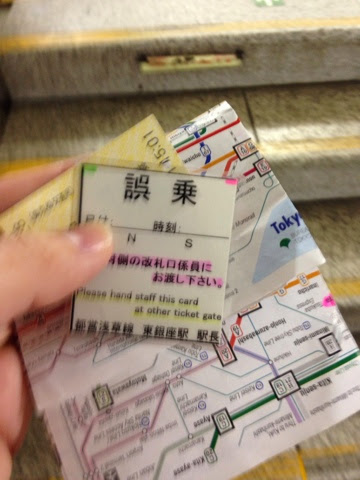 (sorry for the blur – it was an action shot)
Apparently we’re not the only ones to get confused; I’m impressed by their system though.  We crossed the station to the other side, found the right gate, handed the card to the new agent, and we were on our way!
We had some time to spare before the symphony began at 6, so we got off at Shinjuku station to see the sights there and possiblly grab some dinner.  We immediately spotted this: 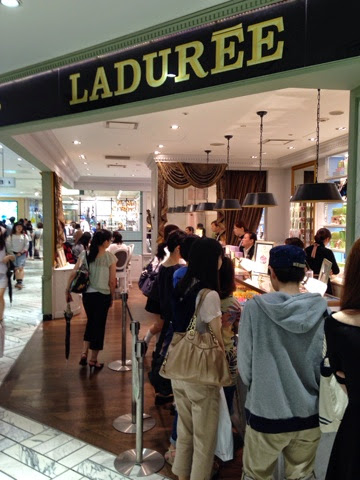 And when one sees Laduree, one buys macarons.  There is no question about it.
They had many tempting-looking items on dispay and, unlike the shops in Paris, we were not chastized for taking photos: 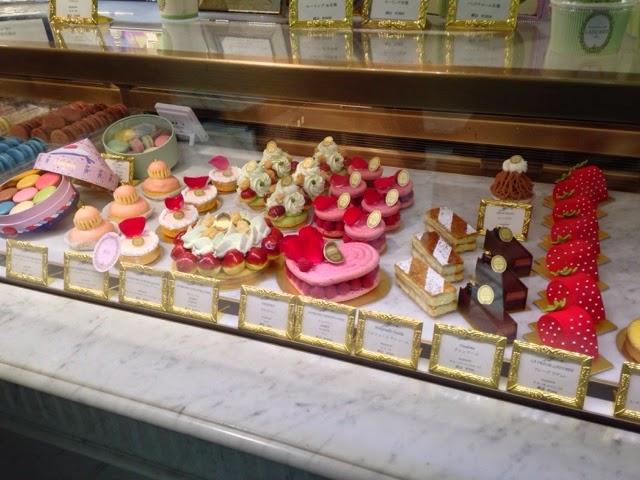 We each picked out a few treats.  I selected salted caramel, orange blossom, citron (which was and will ever be my favorite), and chocolate “incroyable” (with a coconut marshmallow cream instead of the usual filling) 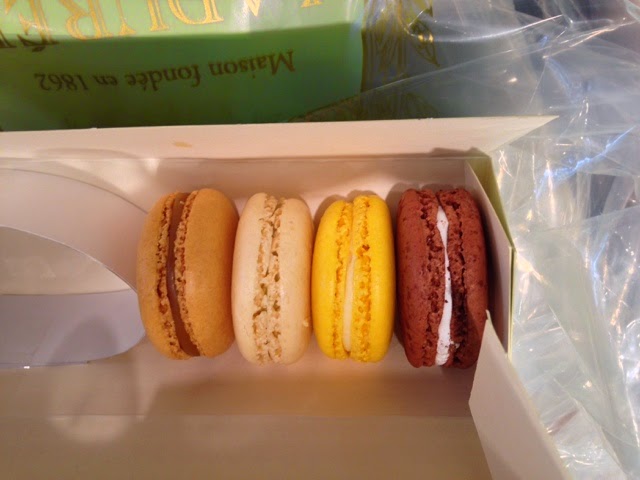 I was surprised to discover a small packet of ice in my bag as well.  They included it to keep our treats cool!  How marvelous! 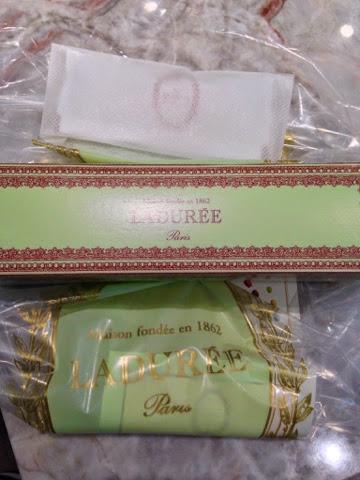 We tried to find a cafe to eat something non-sweet, but had no luck in the department stores attached to the train station.  We did find good views: 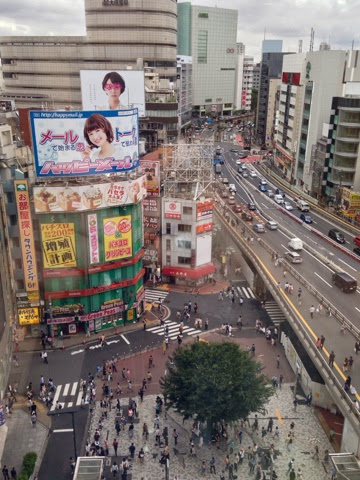 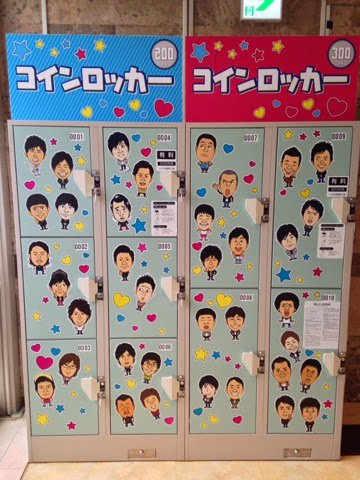 And then we turned instead to the small Dean & Deluca market we has passed in the basement earlier. 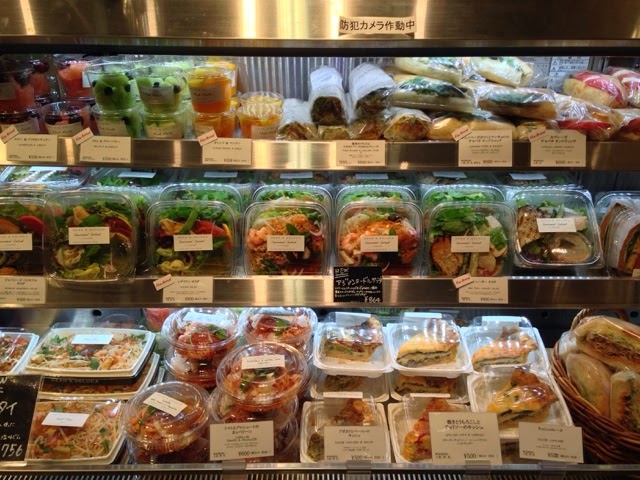 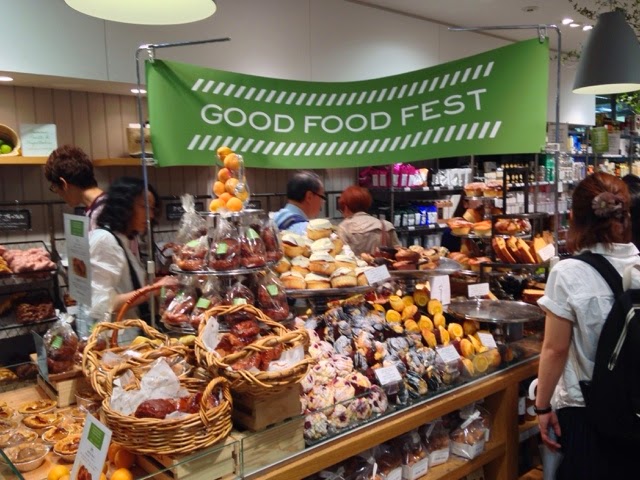 I got a caprese ciabatta roll (again with an ice packet!) 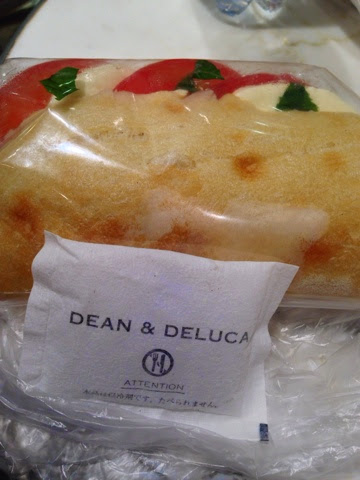 and something called a “black rock”.  It turned out to be a delicious dark chocolate scone with chunks of what may be marshmallow or perhaps was white cocolate.  Either way, yum. 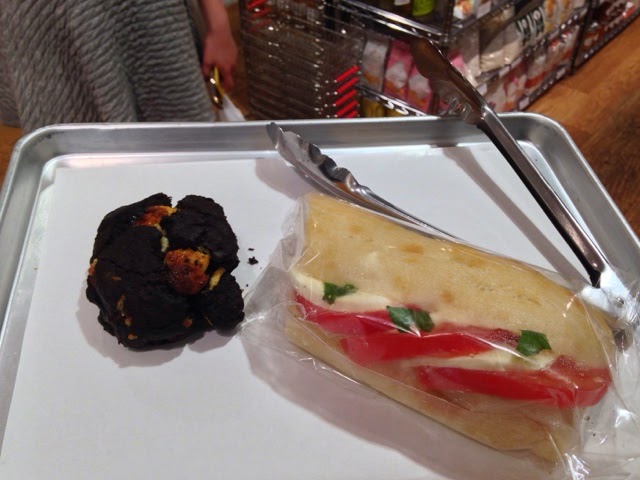 We snagged a small table to perch at and eat.  While taking the obligatory food shots, Jason invaded the personal space of the Japanese woman sitting next to us.  She and I made eye contact, and instead of chewing out the annoying tourists, she very nicely asked about our travels and where we were from.  We chatted a bit, and she offered to take our picture together: 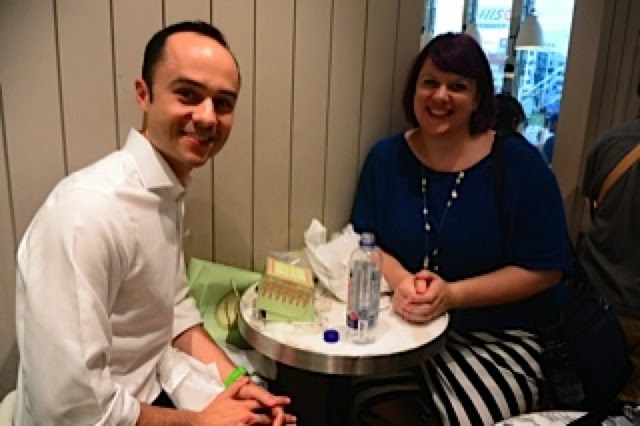 On to the symphony!
We were a little confused about where the will call tickets would be, but one of the ticket sellers spotted us and called out to me by name (“Amanda-san!”) to flag us down.  No need to wonder how they knew me – we were the only white people there.
An usher handed us a plastic bag with what looked like magazines inside before another usher gave us programs.  Once we found our seats, we disocvered that it was a massive stack of advertisements: 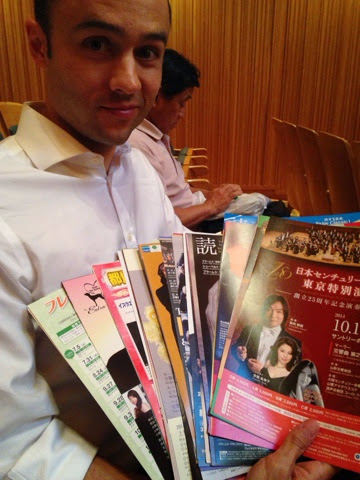 The hall was smaller than I expected, but stunning: 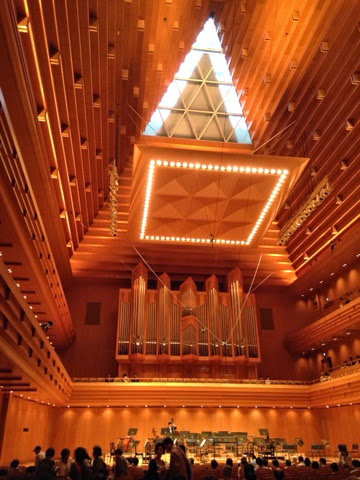 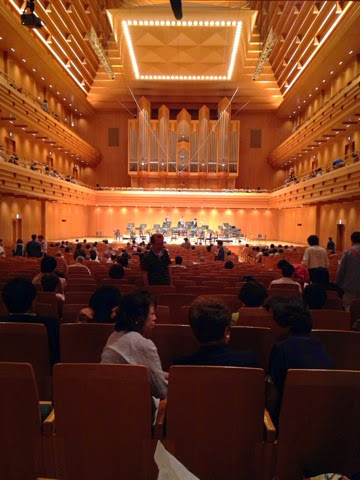 And the acoustics were amazing!  About 15 minutes before the start time the conductor came out on stage with a microphone.  He seemed to be walking everyone through the program (one of those moments again where we wonder – is this normal here?), but then the brass section came out on stage,  As we gleaned what we could from their gestures and the rest of the audience studiously paid attention, the conductor and the musicians provided explanations about the different instruments, complete with demonstrations.  When the first French horn player blew a set of notes, I was amazed at the quality of the sound.  The acostics of the hall made the music envelope you gently, like a breeze, rather than coming straight at you from the stage.  Truly stunning.
The program consisted of a Shubert piece, a flute concerto, and Beethoven’s “Eroica.”  I had a few coughing attacks, one of which brought me to tears when I tried to stop it from happening.  Aside from those moments, though, it was a lovely concert.
As we exited to the lobby, we noticed three ushers tending a table piled high with what looked like gift bags.  People showed their programs, the ushers checked something on them, and the patrons received bags.  We both tried doing the same, but were turned away.  When I was rejected, the usher told me, “Six, six,” and pointed to my program.  On the cover a 4-digit number was printed.  Jason’s had a different number.  Neither had 6’s in them.  My guess – some kind of raffle.  I wondered what the prizes were and noticed one woman pulling a package of cherry tomatoes out of her bag.
We were disappointed not to win any produce, but then we discovered that the ushers at the doors were handing everyone bags as well.  They were filled with what looks like free snack samples: 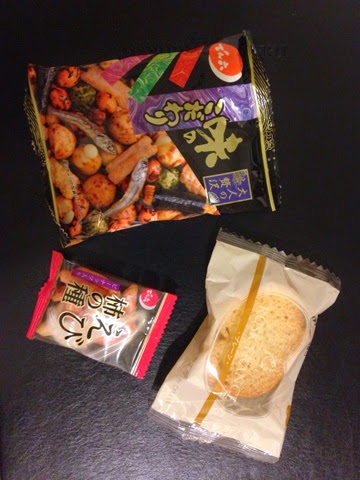 The concert was almost a full house.  Perhaps this is what’s needed for the classical music scene in America to survive – gift bags and door prizes!
We made our way back to Shinjuku in search of dinner proper.  The rain started up again in earnest, and we spent quite some time trying to figure out Lonely Planet’s woeful lack of directions and identifying descriptors for recommended restaurants.  After 30 minutes of searching, we finally found the place that was our first choice only to have the hostess turn us away for lack of a reservation.  I snapped a picture of Jason’s reaction: 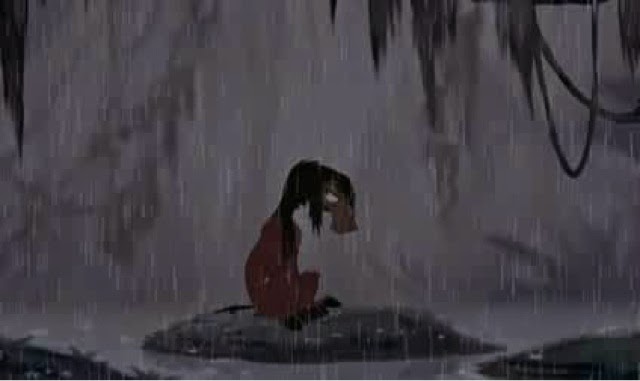 He may never forgive that hostess for not taking pity on our bedraggled selves.
After more searching we found the next restaurant on the list, a tempura place.  They took us in, but alas, the food was not very good.  In fact, I felt quite sick well into the next morning as a result of the food there, so I won’t even grace it with a photo here.  Instead, let’s reminisce about those macarons instead: