A Mall, A Market, and A Chef’s Outfit That Would Be Dangerous Around Hot Oil

Since we were in the area, we decided to check out the stores we had passed on our tour with Veronica.  The mall had several interesting-looking shops, but the prices were much steeper than I would have anticipated in Korea.  Given that and the increasing number of teenagers that filled the place as school let out, we were definitely in a trendy part of town. 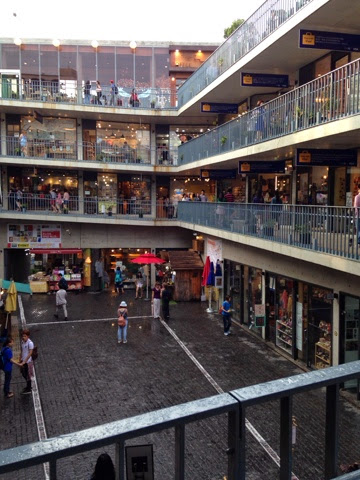 They also had statues of sheep in the rooftop garden: 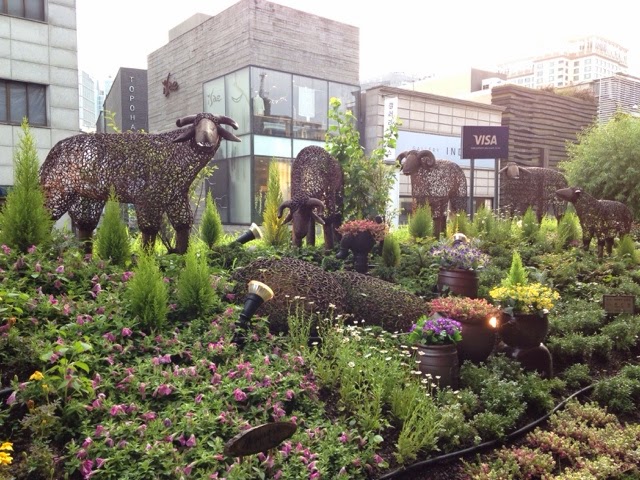 We wandered back in the direction of Myeong-dong (near our hotel), coming across the Cheong-gye Stream, which was uncovered a few years ago and turned into a pedestrian walkway. 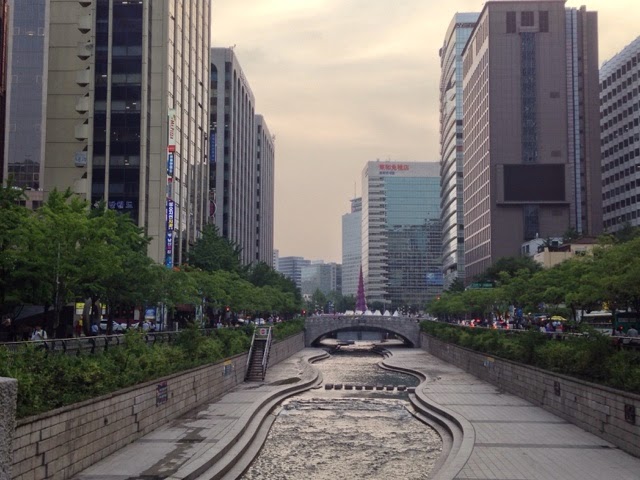 We soon hit a street packed with vendors and shoppers and dove into the crowds to absorb the sights, sounds, and smells. 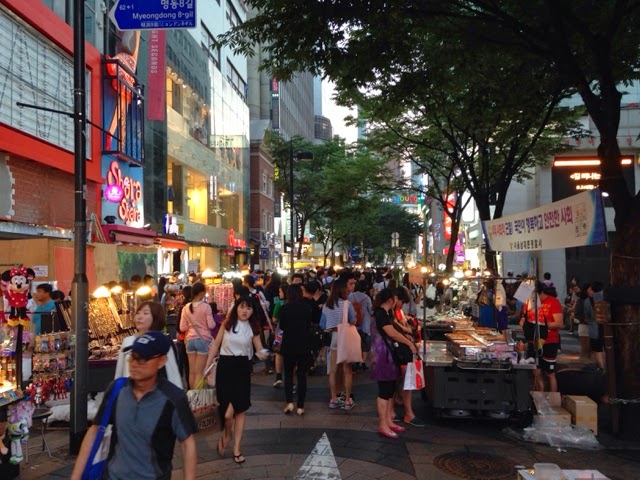 In the area we found the theater for a show called “Nanta” that Cindy and several guidebooks had recommended. 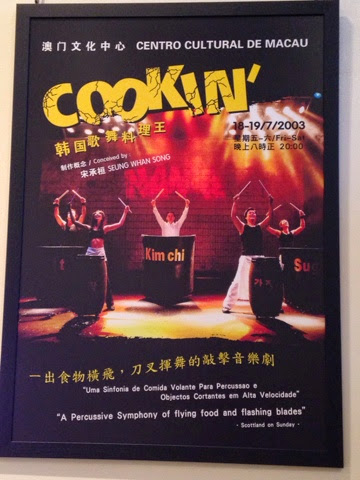 Here are some promotional shots.  Please note the Female costume (actual character name).  This was not the only gratuitous belly exposure in the show. 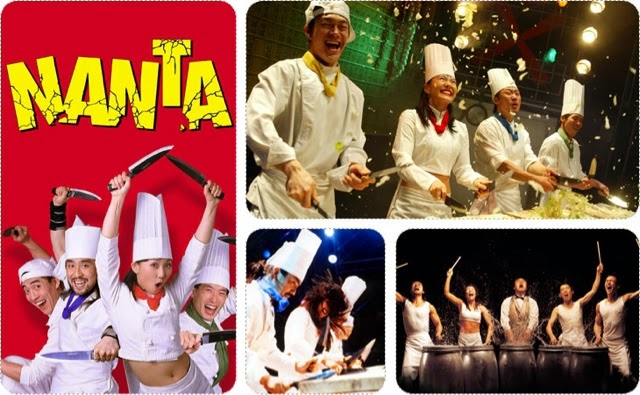 Nanta has been running in Seoul for over 15 years, toured internationally, and is apparently popular enough to merit a window hologram of its character: 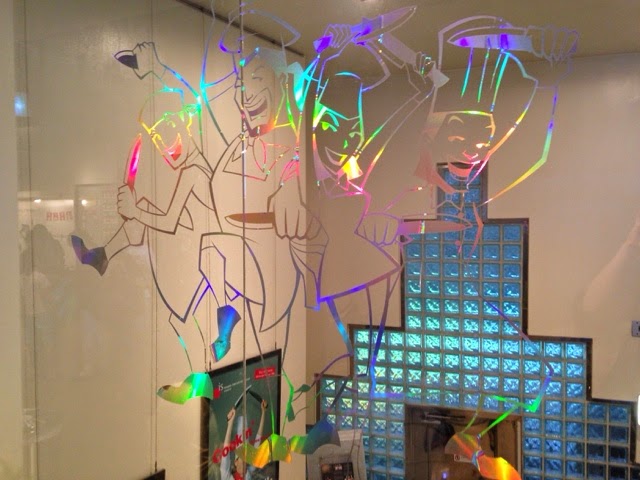 I would describe the show as “Stomp” set in a restaurant’s kitchen.   The plot is minimal (they must cook a wedding feast by 6:00), the script is virtually nonverbal, and the characters are named as follows: 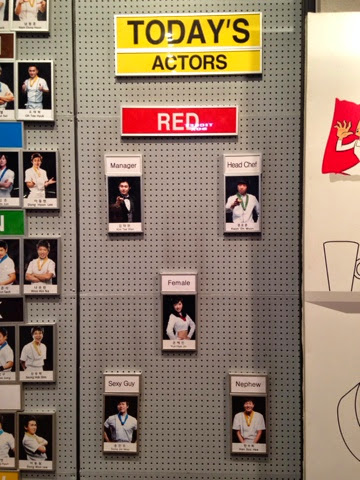 Manager, Head Chef, Hot Guy, Nephew, and Female.
We checked out the photos of the other rotating casts and were glad to find that we indeed had the hottest of the Hot Guys.
It had all of your commedia standards with some Blue Man rip-offs (including a pre-show series of instructions to the audience presented simultaneously to the audience in five languages on a series of slides.  It included instructions on clapping, cheering, and an appeal to sing Happy Birthday to he Head Chef.  Interetstingly, everyone imediately burst into “Happy Birthday to You” in English.  Seems the song is more international than I thought!).  It was heavy on the slapstick, which the audience went bananas over every time (They were all dancing!  And then the manager came in!  And everyone stopped dancing except the Hot Guy!  And then he was embarassed because he was the only one dancing!) with some impressive percussion work on various kitchen tools and the requisite audience participation.  It was one of those shows that was mildly entertaining for me (Jason dozed off for part of it), but fascinating to see the rest of the audience respond so favorably and with such passion.  At the end the audience called for an encore.  We were in a blackout, and the lights came on suddenly to reveal two of the characters drumming on water-topped barrels (a la Blue Man again) and two of the men posed shirtless on top of their drums.  Hot Guy lives up to his name.
I was still stuffed from the food tour, but Jason sampled some street food after the show from this booth: 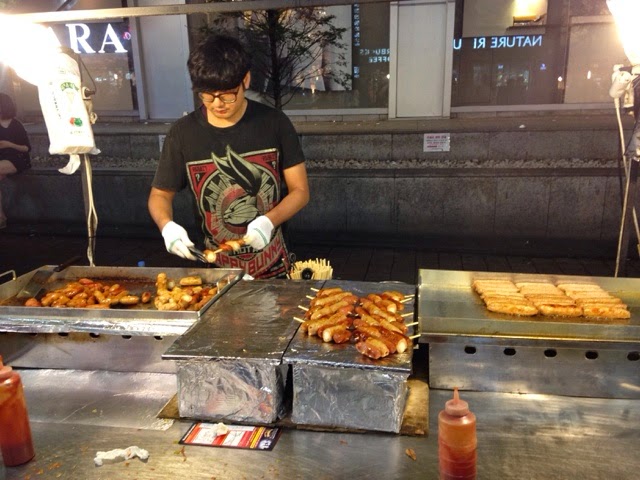 and we walked back to our hotel, glad that the rains had finally stopped for the day.