One of my very favorite things to do is to wake up in a new town, strap on my walking shoes, and head out the door to wander.

It’s gorgeous here in Seattle this morning – mid-60’s and sunny.  It’s also humid, as evidenced by my desert-body’s sudden sweaty outbreak amid the pleasant temperatures.
Despite being exhausted by a late night yesterday (it is absolutely impossible to sleep well the night before a trip), I had a hard time falling asleep last night and didn’t really doze off until sometime after 2.  I did enjoy the view in Jason’s living room, though.  From my position on the couch I could see the lights of the city, including the building across the street.  I was not the only one up so late, as evidenced by the glow of bedside lamps and blue television screens across the way.
Jason was up early of course, heading out to Crossfit around 5:30 AM.  I woke up when I heard the soft noises of him getting ready.  The sun was already shining, but I threw an arm over my eyes and resolved to get more than three hours’ sleep, dang it.
And I did, kind of.  I dozed off-and-on, finally getting up when he departed for work.
As I mentioned yesterday, my travel habits are thrown off by the new location.  It’s strange to be in a new apartment in a new city but with so many of the same hallmarks of the many mornings I’ve woken up on Jason’s couch as he heads out for a day of work and I head out for a day of play.  The morning patterns and habits all fall right into place, but then the little tweaks of the new circumstances make everything feel a little bit off.
I still love it, though.  I got ready for the day, locked the door, took the elevator downstairs, and headed outside.
Jason lives in Belltown, a pleasant 1/2 mile walk from Pike’s Place Market.  I headed there first and, per tradition, christened my trip with a gyro from Mr. D’s amid the sights and smells of the fish and flowers. 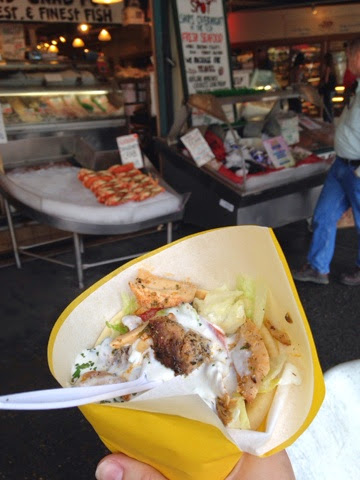 I also took a selfie with better evidence of my location than the one last night: 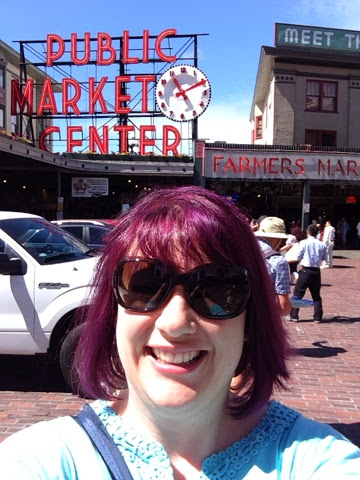 And then I wandered.  I have found several tour groups, a yarn store, art galleries, window displays of rugs that make me both glad and sad that we’re not going to a place with souks on this trip, a store called “Damn the Weather”, a place that claims to have “Seattle’s most boring tourist display”, and a store that had so many things right up my shopping alley that I’m bookmarking it for after our trip: 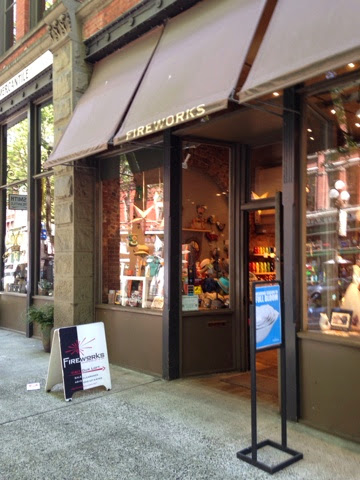 I’m in Prioneer Square at the moment, typing this under the pergola: 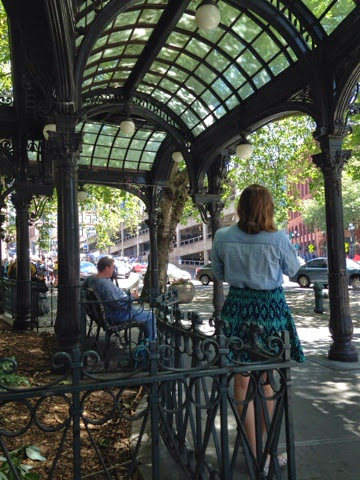 It is not the original pergola.  According to the nearby bronze plaque, the original pergola was destroyed when “a truck failed to safely navigate its turn,” which is an oddly polite description.  This pergola was reconstructed from whatever metal and glass they could scrounge up from the wreckage of the original pergola.  I tell you this in part because I just learned it and in part because I really like the word pergola.
Pergola.
I’ve walked 1st street until all that remains on the colorful directional signs is “Stadiums” (a destination that holds no appeal whatsoever to me).  Although I  successfully found a bench to type this away from any unpleasant smelling and/or smoking folks (under a reconstructed pergola no less), I think I shall move on.  There are more streets to wander on this lovely day.