The yearbook came out recently, and I had the chance to flip through a copy before handing them out to my students.  Rather than the brick-like tomes of my high school days, MTHS’s version is a slim 40-some-odd pages put together by our librarian and a couple of her TAs.
She does her best, and there were some fun parts to see this year.  She even made a point to come to the musical opening night to get some pictures for a page about the show, something that rarely happens since the show is so often up against the publisher deadlines.
I discovered that there was apparently a “Best Teacher” contest, since the winners were announced amid the senior pages: 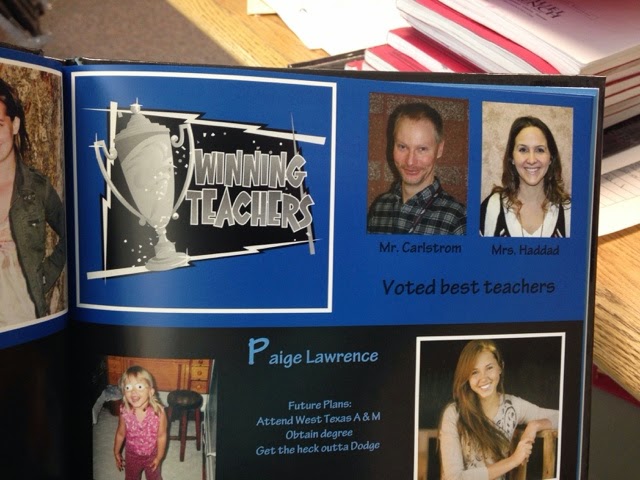 No one i talked to was aware of the competition, so I assume it was some sort of senior vote.  Being an occasionally competitive being, I was a little disappointed that I didn’t win.  I reasoned with myself that a) Dean and Danielle are both great teachers and b) the “best teacher” label often goes to the teachers students currently have – hence the teachers who have mostly upperclassmen frequently winning.  Then I turned a few more pages to the teams and clubs section and discovered: 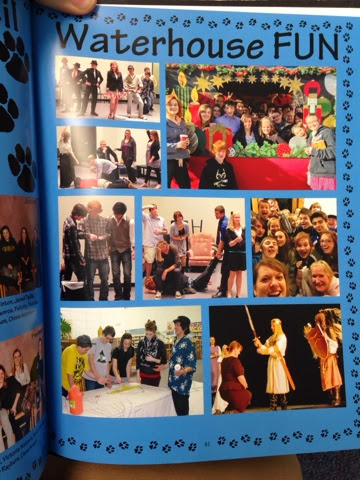 An entire page dedicated to “Waterhouse FUN.”
Okay, that seems a bit odd.  I think this is another case of teaching photographable subjects, but it feels a bit inadequate to have drama field trips, speech meets, and set painting all summarized under my name, especially since there is no further explanation for the content of the photos.
Ah well.  It almost makes up for them leaving out any mention of speech team.  (“What the crap?!” the speechers demanded as they stormed into my room in a rage upon discovering this.  I tried to reason with them. “I’m sure it was an accident.”  “We’re State Champions!” they exclaimed.  “We’re the only team in the school who won State!  Why would they leave us out?!”)
I can empathize with the yearbook staff – I know what it’s like to work for months on a project that people only see mistakes in upon reveal.  It’s a tough job, but I can also empathize with the satisfaction that comes from working on a project that will shape the memories of a part of their lives for so many years to come.
Then again, it may not shape memories so much as create mysteries.  I, for example, have absolutely no idea when this picture of me was taken: 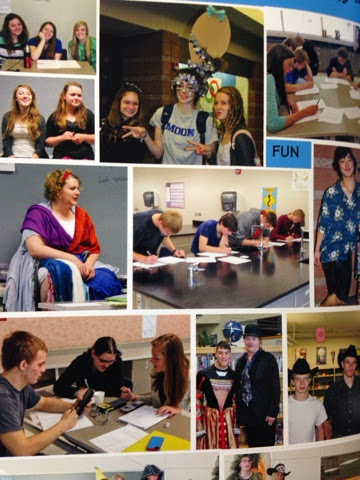 You would think I’d remember the occasion that led me to curl my hair and wear an outfit made of scarves, but no.  I have no memory whatsoever of that day.  Spirit week, perhaps?  Maybe Halloween?
Or maybe I’ve just been teaching too long.