Unsurprisingly, a snow day is a wonderful way to begin a weekend trip.  Not only did I have ample time to sleep and finish packing, but I also had time to take care of some housekeeping tasks and adult chores (car registration, ordering contact lenses, etc.).  I also had ample time to make my trek to the airport while avoiding rush hour.  It wasn’t snowing, but the roads were incredibly slushy and my car is an icy, muddy mess.

DIA was crowded, but the flight to Chicago was smooth.  I arrived at Midway and took the train into town.  The hotel was a little under a mile away from the metro stop, so I pulled on my gloves and scarf and set out to enjoy the sights of Chicago in winter.  There were ice chunks floating on the river: 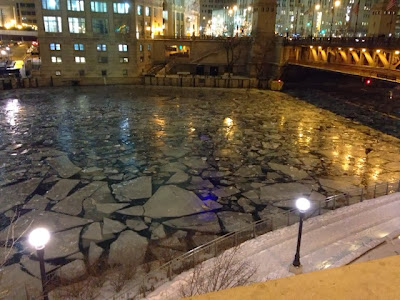 so it seemed appropriate that some people still had Christmas lights out: 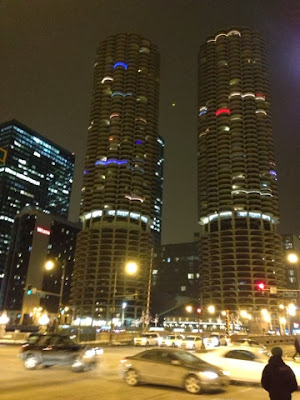 Mom and Dad arrived at the hotel just minutes after I walked in, and Jason was only 30 minutes behind; so once we all rendezvoused, we headed out to dinner at the nearby Weber grill:

The food was tasty and they let us linger at our table long after finishing the meal, which gave us a pleasant and warm place to catch up and swap stories.

When the waitress nicely asked if we needed anything else before she went home for the night, we took that as our cue to leave.  After a brisk walk back to the hotel, we bade good night to my parents and indulged in our traditional cram-four-months-of-conversation-into-the-first-night ritual.  It was disrupted a bit by a round of very-unhappy GI problems on my part (which I blame on the sandwich I had for lunch at DIA), and I made a midnight dash to the hotel lobby to purchase some Pepto Bismal (the only choice available).  It was enough to allow us to keep the conversation going until we finally called it quits a little before 4 AM.