We met my parents for breakfast, a bit bleary-eyed from the late night but ready for the day.  Given the forecast: 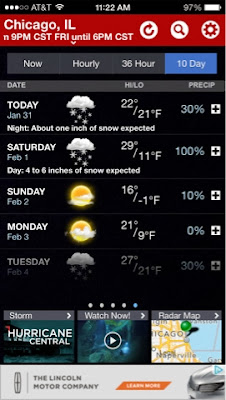 They had a special exhibition on about the influence of the Greeks on the art of Ancient Egypt.  The changes made to their mythology was fascinating, and I enjoyed seeing side-by-side comparisons like the one below,

The next exhibition we saw was a series of winter scenes from the Japanese wood block artist Hiroshige.  Appropriate, given the weather outside and upcoming summer travel plans.
Jason and I needed to leave to meet friends for lunch, but we had just enough time to see Chagall’s America Windows. 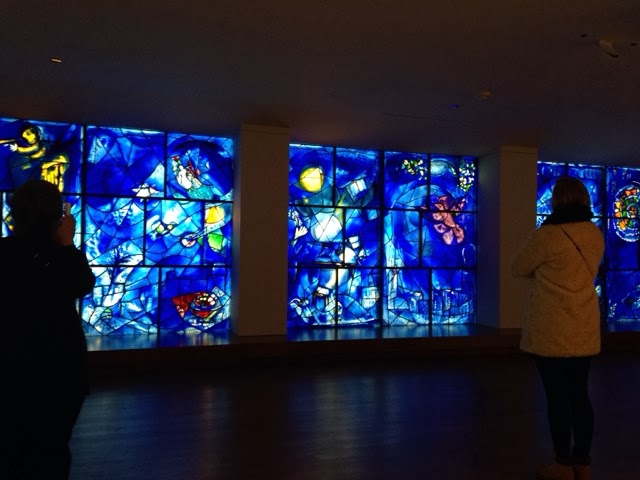 A series of scenes depicting the arts, they were created for the Bicentennial.  I loved the look of fields of blue glass.

Jason and I split off at this point to hunt for a cab to Wicker Park.  Vanessa, a friend from Jason’s study abroad program in France, and her husband Stephen met us for lunch at a new restaurant, the Carriage House. 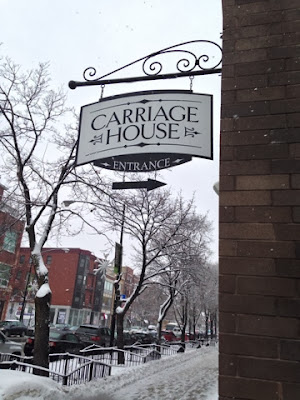 The food was not spectacular, but the company was nice and we once again lingered at the table talking long after the rest of the crowds departed.

Vanessa mentioned that a nearby bakery sells kronuts, so we walked over there after lunch to fulfill Jason’s mother’s command that he participate in the recent food fad.  The bakery only had one left, filled with strawberry jam and topped with marzipan frosting.

It was far too sweet for my taste, although I could imagine the appeal of dipping a fresh, plain one into a warm breakfast beverage.

After hugs good-bye, we hopped in a cab and arrived back at the hotel with just enough time to eat some gourmet popcorn, take a quick nap (well, Jason napped), and change for dinner.  It had stopped snowing at this point; but the streets were quick slushy, which meant Jason could show off his mini-galoshes: 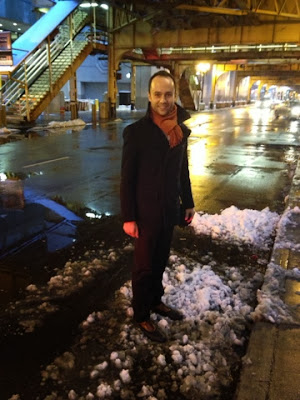 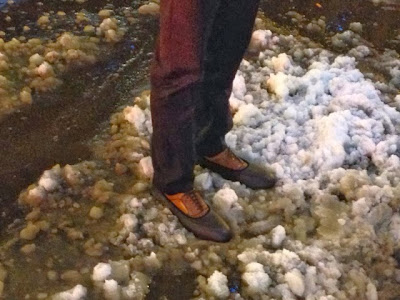 We couldn’t spend a whole 48 hours in a Michelin-city and not eat Michelin, so I made pre-theater dinner reservations at Everest.  True to form, we had a difficult time finding the actual restaurant.  Once we found the entrance to the Stock Exchange building in which it’s located, we had to be buzzed in by a security guard and take two different elevators up to the 40th floor.

The service was attentive; the staff was eager to please and eager to ensure that we made our show in time; the views were very good and improved as the meal went on and the fog lifted: 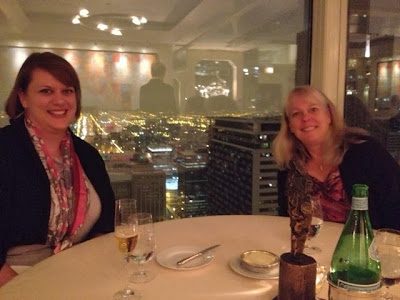 And, finally, the food was delicious.  The stand-out of the night was Dad’s oysters, but all of the appetizers and desserts were stellar.  I was not as impressed with my main course, but the foie gras that melted in my mouth made up for it.

Just as we began sipping our deliciously-bitter hot chocolate, our waitress (played by Jane Lynch) appeared to remind us that we had a show to see.  We hurried to polish off the remaining sweets, bid farewell to the entire restaurant staff who turned out to see us off in a Hello, Dolly kind-of way, retrieved our coats, and descended to find a cab to get to the Lookingglass Theatre:

However, my description of the show (and Sunday) will have to wait until tomorrow night.  I have school tomorrow, it’s past my bedtime, and, as you may have surmised, the last two night, while fun, were not sleep-filled.