(Note:  Hey, there!  Sorry for the delays.  I’ve got a freakishly early speech meet this weekend, a show next week, and progress reports due all on top of my normal explosion of school work for this time of year; so it may take me longer than I would like to wrap up my recounting of the New York weekend.  I will get there, though, and I’m willing to bet that I beat Jason to it. 🙂  At the moment I have (checks clock) 14 minutes until my “Go to bed!” alarm goes off, so let’s see if I can at least get up to the show itself, shall we?)
After eating our way through the Hipster Market, we turned our sights and our path towards the Brooklyn Art Museum.
It was about a 20 minute walk away, and I throughly enjoyed the autumn afternoon as we walked.  The trees were nearing the end of their red-and-gold decor, the weather was brisk but not uncomfortable, and the sky was dappled with clouds like so: 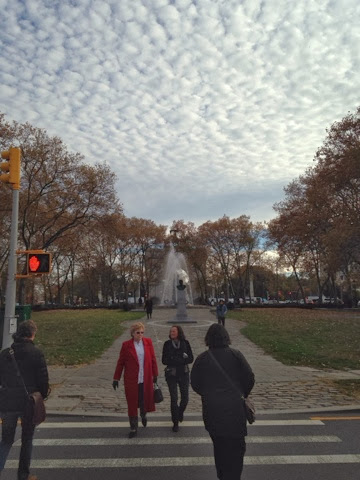 Isn’t it strange, I thought, to be in NewYork and see so much sky? 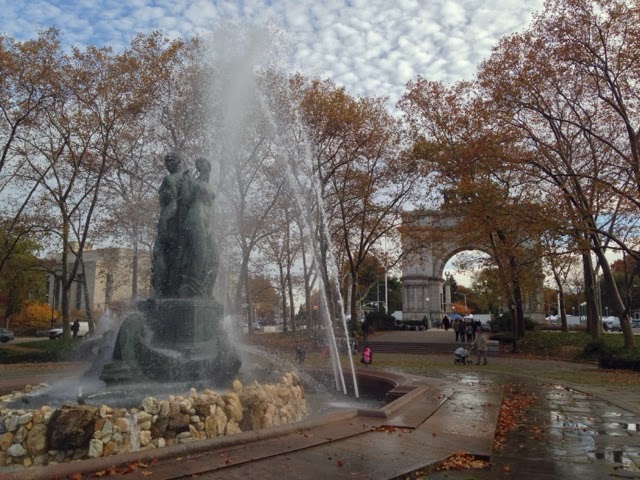 I also wondered how many triumphal arches are in the area.  This one seemed to be dedicated to the Civil War. 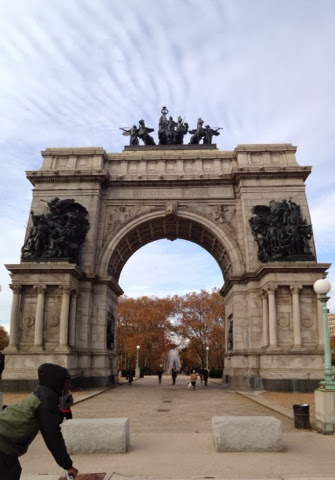 Not really in keeping with the Roman tradition, unless the South was way farther north than I thought; but who am I to dismiss a good triumphal arch?
As we crossed to the other side of the arch we found… 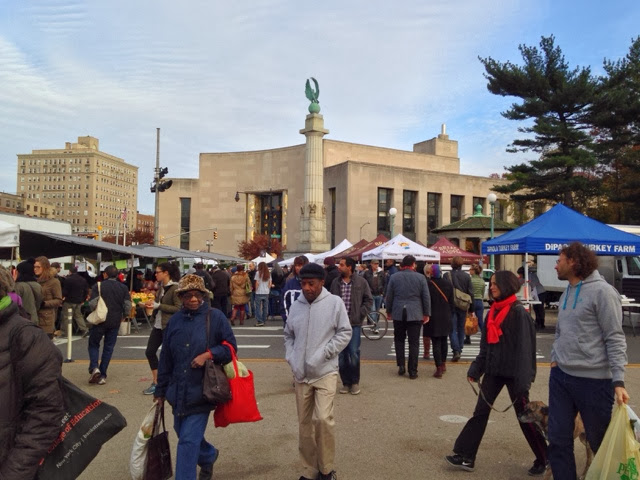 …another market! (That’s the public library in the background, if you’re wondering)  More farmer’s than hipster’s this time, and we passed several people toting bundles of fresh and oh-so-green-smelling eucalyptus home: 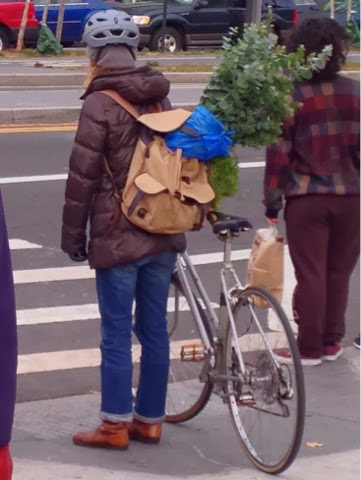 Shortly after I took this photo, Jason suddenly turned to me with wide, happy eyes and darted away.  That can only mean one thing. 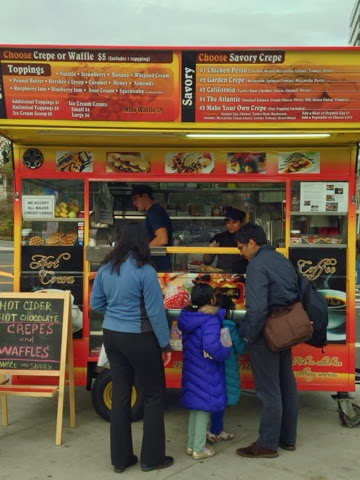 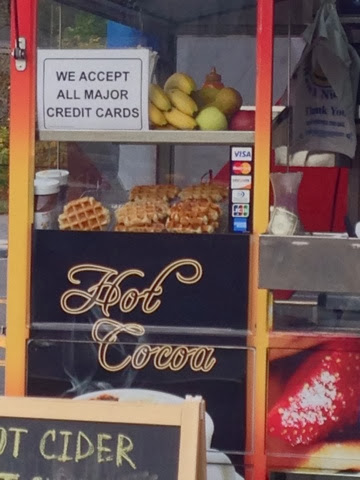 And so we partook.  After all, it had been nearly 20 minutes since our last meal. 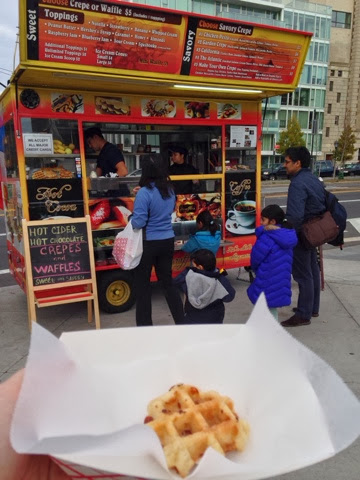 I got a mini waffle, which was actually a pretty good size.  I’ll have to keep that in mind when I’m making them for my Humanities class next term.  The vendors were incredulous that we didn’t want any toppings on our waffles (“But you get one for free!”), but we insisted on remaining waffles purists as well as waffle snobs.

Fortified with those caramelized, crunchy pearls of sugar and dough, we followed the walls of the botanical gardens to find: 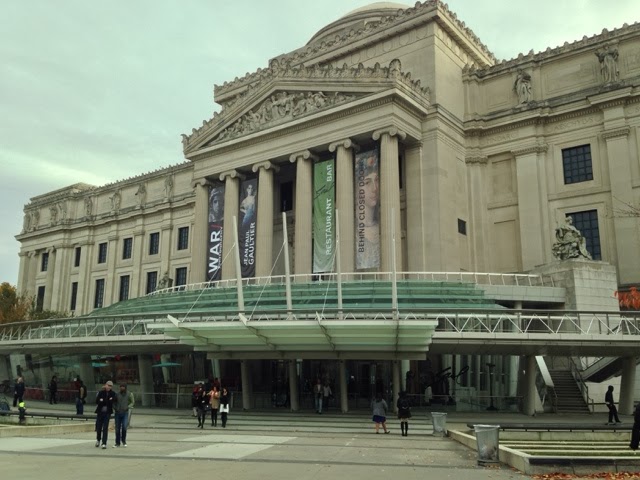 Which unexpectedly had enormous lines.  The larger one was for the temporary exhibition, so we forwent seeing that in favor of only a 30 minute wait for the general admission.  Should you fear that Brooklyn’s hipster image disappears inside the museum, no worries – they put a bird on it: 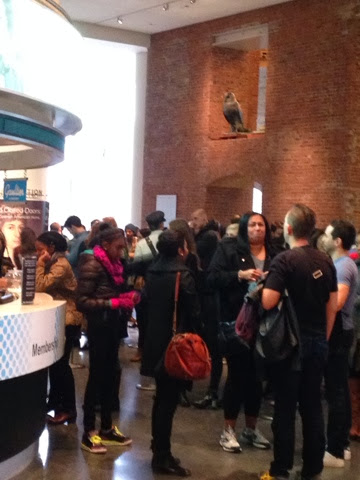 Neither of us knew much about the BAM’s collections, so we snagged a map and scanned it for ideas of where to go.  Jason recalled hearing about the period rooms when he spotted that section, so off to the fourth floor!
We stepped out of the elevator and found ourselves in an exhibit of work from Kenya-native/Brooklyn-based artist Wangechi Mutu.
I didn’t love all of her pieces, but every single one was fascinating.  It was the first time I’ve seen collages that struck me as artfully complex pieces of work.
Appropriately, we exited that room to find ourselves in an area labeled “The Feminist Center”, the core of which is Judy Chicago’s permanent installation, “The Dinner Party.”
You know it’s going to be a good installation piece when it begins with a map showing visitors “how the artist intended patrons to view the project.”  Dutifully we walked underneath embroidered banners such as:
I could already tell that I was doing the right thing.  I mean, not only was I, a woman, there to guide my male companion through this passage, but I was actually menstruating at the time.
I am, like, totes female, guys.
The passage led us to a dimly lit, triangular room.  In the center was a trio of banquet tables set on top of a white tiled triangle with gold lettering: 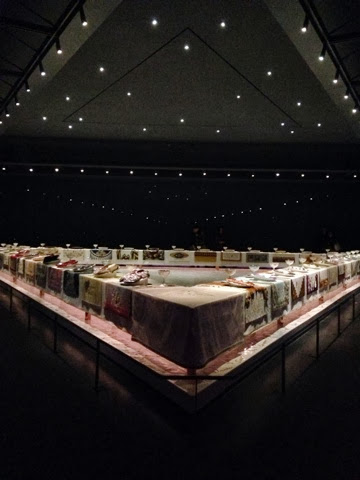 Each place setting included an embroidered table runner with the name of a female-promoting society or significant woman from history, a matching set of utensils, a chalice, and a hand-painted china plate that thematically depicts the “central core.”  You know what that means: 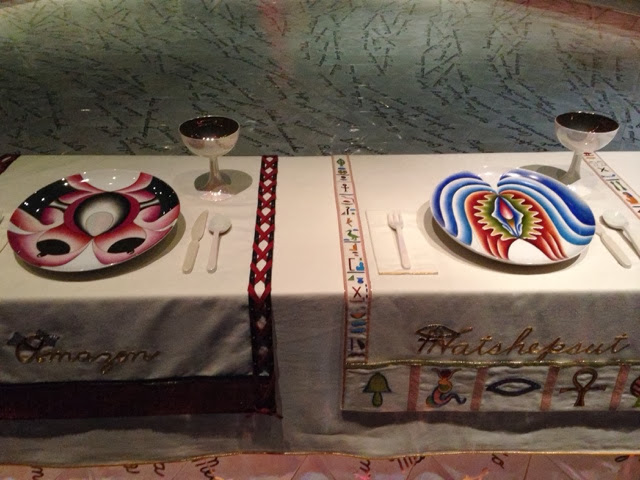 The embroidery was beautiful, though, and I have to admire the creativity of each piece.  I mean, check out Emily Dickinson’s vagina place setting:

Yep.  Seems about right.
We emerged from the dining room into a section with displays that briefly (and with not-so-thinly-veiled bias) explain each honored woman.  Like the place settings, the woman are ordered chronologically.  As we studied the boards (and enjoyed sitting down), we found that underneath each featured woman was a list of women who were influenced by her or who accomplished similar work.  Under dear Emily, for example, was a list of female poets such as Christina Rossetti and Edna St. Vincent Millay.  Those names are the words that make up the gold lettering on the tile floor. 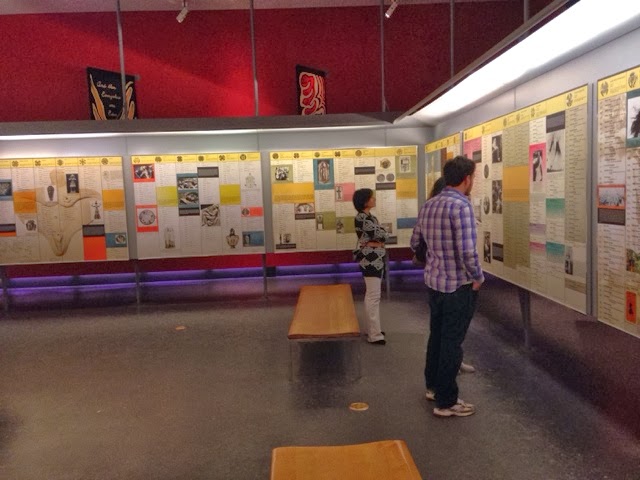 It was actually an interesting way to browse history, and we spent quite a lot of time looking through the names and accomplishments.  I have to admit that while we began the exhibit with eye rolling, it wound up being one of the highlights of the day.  Plus, I found something interesting on this striking column: 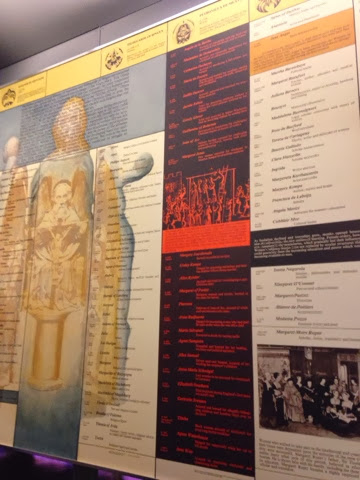 Look at what I found towards the bottom of the list of women who were burned as witches: 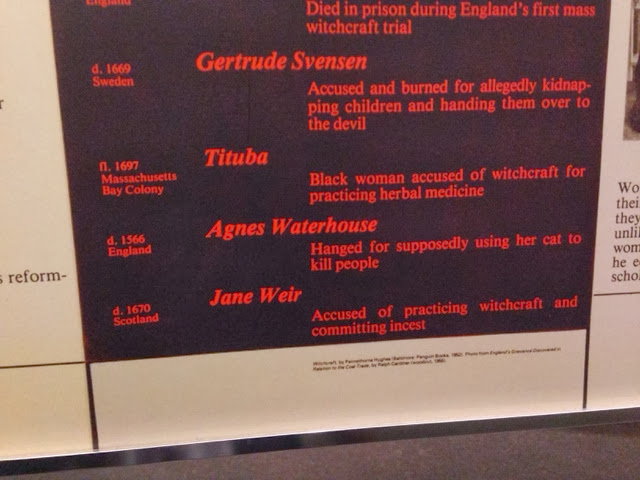 Huh.  That’s one ancestral story (not to mention an unexplored use for my furry beast) I haven’t heard yet.  (And by “furry beast” I do mean Natasha, in case you are disoriented by all the vulvae).

Fortified this time by a renewed sense of my own natural feminine powers, we tracked down the period rooms we initially sought.

Compared with the previous exhibits, they were familiar and calm. 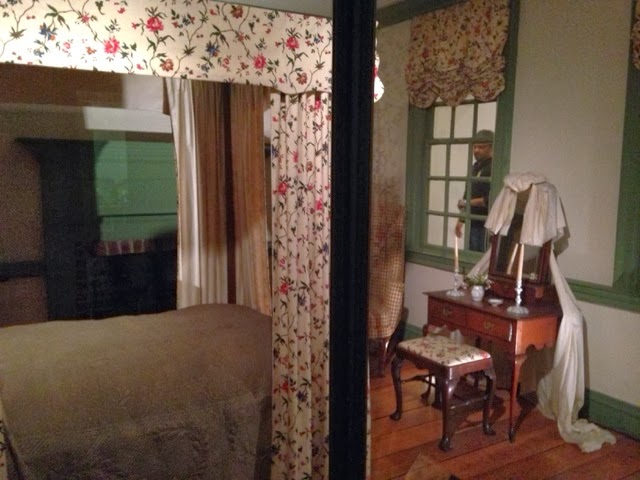 Or so we thought: 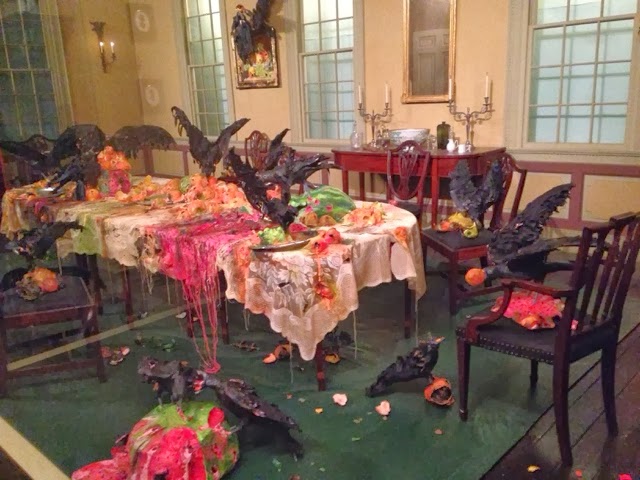 It’s startling to step into a glass cubicle expecting to see a serene plantation home dining room and instead find a scene of carnage and crows.  This is one of the few times I have been absolutely certain that the artist’s objectives for the viewers were fully met.  Valerie Hegarty’s installations into (onto?) four of the period rooms is a temporary exhibit; and again, while I didn’t particularly like them, I can’t help but admire the strength of the reaction they provoked in me. 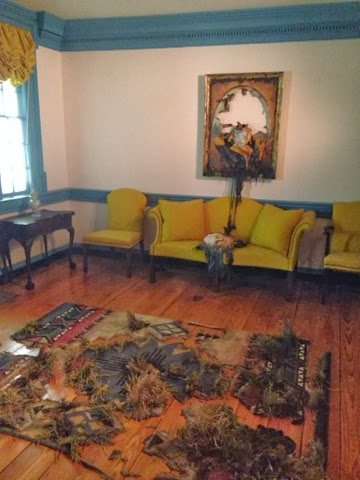 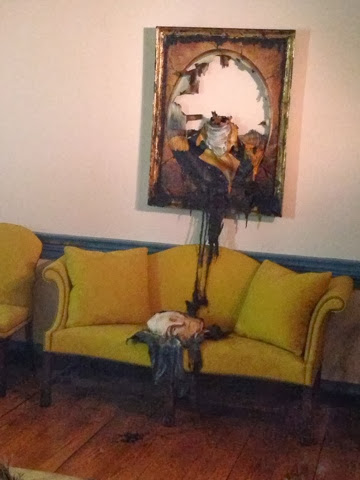 We were both drooping by then, so we curtailed our exploration of the BAM and headed back to the hotel to rest and regroup before the show.  As no cabs were in sight, we walked back to the hotel and had just enough time for Jason to take a power nap while I bought show tickets for another joint quick trip (Chicago, here we come!) and began researching our chosen destination for next summer’s grand adventure.  Once Jason woke, he arranged for our ride to the show and I whittled down the contents of my purse to the most-essential-items-that-I-can-carry-in-my-pocket.  We then grabbed our room keys, our scarves, and our phones and headed out to Then She Fell.