When Rachel and I discussed her birth plan several months ago, she fretted over what to do with Jack when she went into labor.  To me the answer was obvious.  “You call me,” I told her.
I am the aunt, and here I had a chance to be relevant.  Being the aunt is something that people keep offering up as a consolation prize for being single (and therefore childless).  While I am unfamiliar myself with what it’s like to have a close extended family (through no fault of my own aunts and uncles – they’re all people I really like, but we rarely lived anywhere close to family while I was growing up), I am game to believe that there’s a benefit to having a lot of adults around who like you.
So I updated my sub plans every day for the last week and a half, read through Rachel’s incredibly detailed birth plan emails (Do you know which tube of toothpaste is the preferred one?  I do!)*, packed an overnight bag for the trunk of my car, and on Thursday afternoon when Rachel said she was heading to the hospital to be induced, I called in for a sub and drove up to their place to be the aunt.
It was too close to Jack’s bedtime once Rachel and Ben left for us to do much more than watch the Tangled bonus short (“Silly lizard!  Silly horse!”) and commence the multi-step bedtime routine.  But, oh, did I have plans for this guy once he got up in the morning! 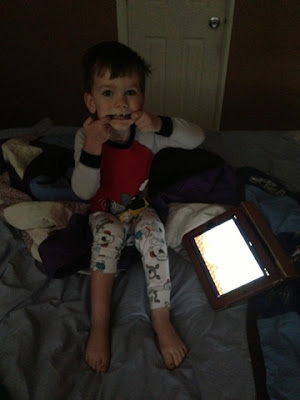 Rachel’s discomfort and impatience aside, I was glad her labor was delayed.  I wanted to take Jack to the Children’s Museum on our day together; and when I looked up the times the weekend before, I was dismayed to read that the museum was closed for its annual cleaning this Monday, Tuesday, and Wednesday.  Her slow uterus meant that we got to play there after all.
And what a place it was!  Jack hadn’t been there in his memory before, but he sure perked up once we got inside and saw the full-sized fire truck: 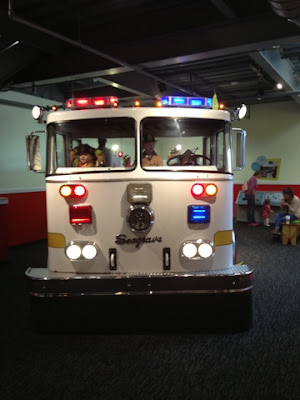 We climbed all over it, and Jack was quick to point out the smoke “over there!” that he could put out with the mounted hose. 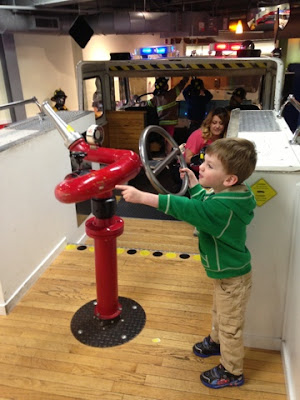 He even had a turn in the driver’s seat: 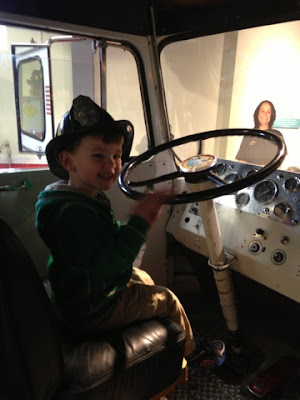 From there we headed upstairs and discovered a cardboard/woodworking station complete with tools, scraps to work with, and tiny little safety goggles: 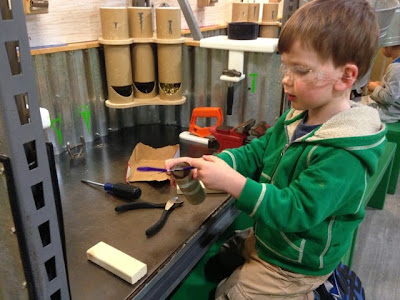 After five minutes there, it was on to the train tracks: 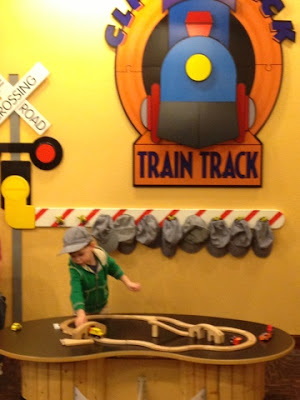 One aspect I loved was that each station had costumes for the kids to wear.  My favorite outfits had to be the purple lab coats and safety goggles of the Bubble Room: 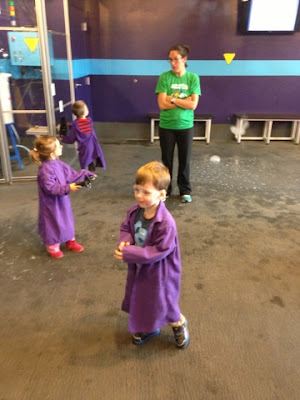 But then, this room also had the best activities.  From large hoops to hand-held plastic wands, they had all kinds of bubble-making devices: 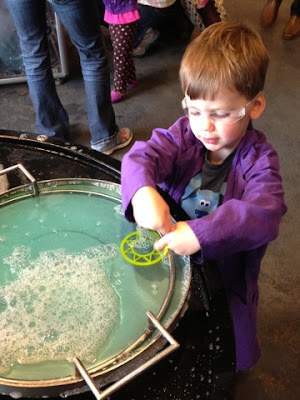 Amid each station of bubble solution, there were hoses continually emitted water vapor that you could use to inflate cloudy bubbles: 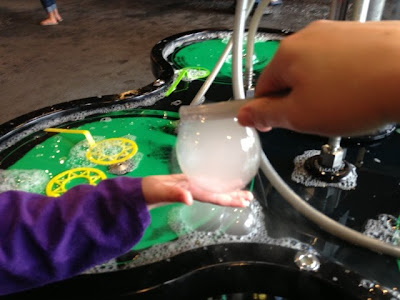 and in one corner was a pulley system that let you enclose yourself in a full-sized bubble cage. 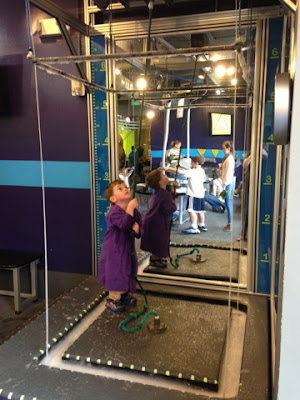 Jack spent a long time there (almost 15 minutes!), but he soon became distracted by the number of orange balls we kept seeing in another section of the museum.  So, off to the ball room! 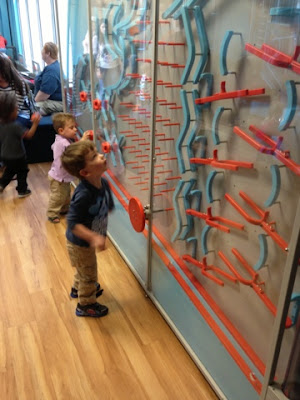 There were giant pinball-like walls, machines that let you send balls into the air by jumping on a platform, and a whole section where you built paths out of foam bridges and stairs to create circuits connecting tubes that suck the balls up onto a course above your head to the tubes that spat them back down again.  It was pretty freakin’ entertaining for both the 3 year old and the 33 year old. 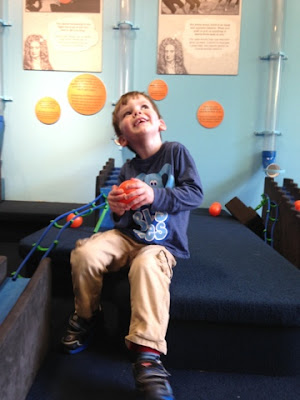 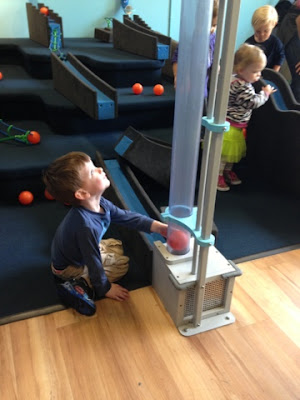 We also played in the oversized backyard, 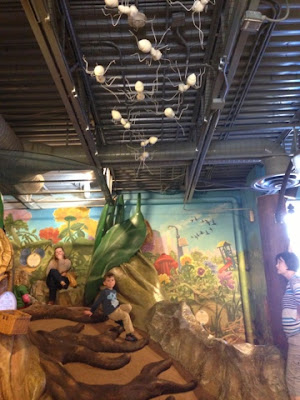 climbed inside a tunnel filled with stuffed mushrooms and gigantic earthworms (ew), 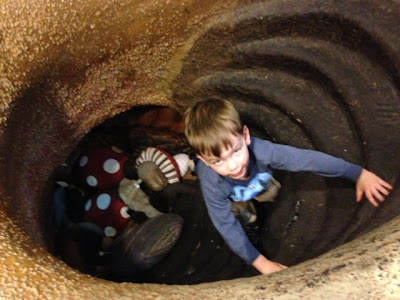 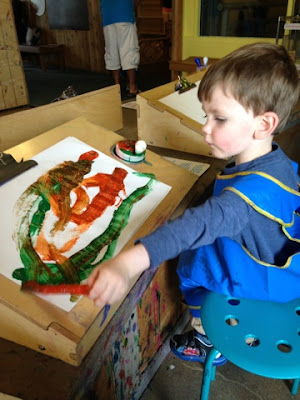 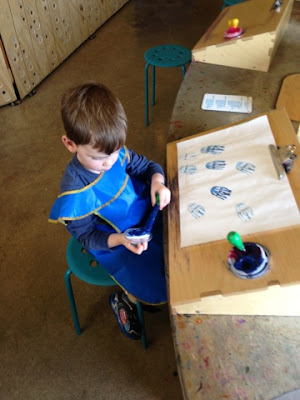 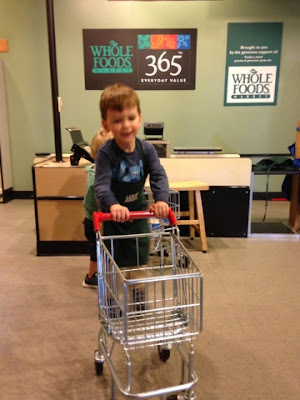 cleaned up their disastrous produce aisle: 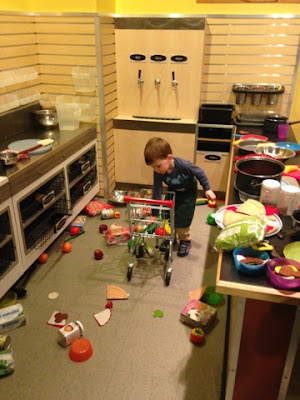 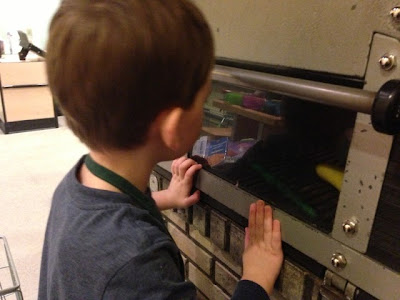 and then ran it all through the check-out stand: 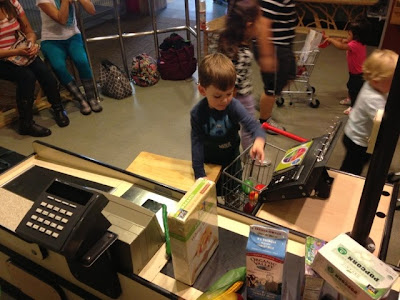 And when I say “we,” I mean it.  Every activity was accompanied by a “Come on, ‘Manda!” and I dove right in.  Literally, in the case of the backyard tunnel.  By 1:00 we were both hungry and Jack was tired enough to flop right down on the firemen’s beds when we headed back downstairs: 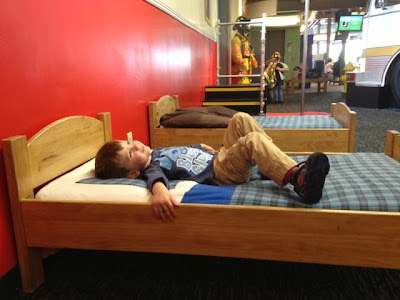 but not tired enough to miss out on the chance to ride the life-sized cow statue outside. 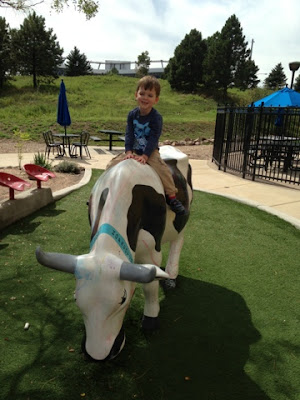 We headed back to his house for a sleepy lunch: 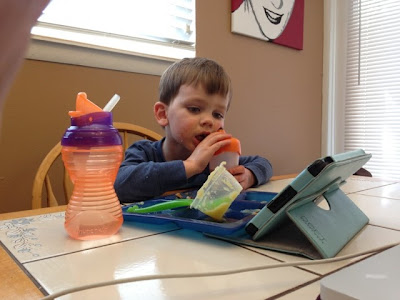 and a couple hours of Quiet Time.  Fortunately, the grandparents arrived just at the end of nap, bringing with them all kinds of toddler entertainment: 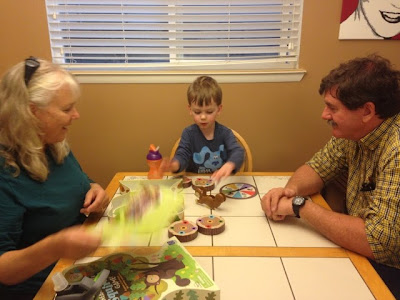 (Warning – turns out Jack is a major cheater when it comes to the Sneaky Snacky Squirrel game!)

They take their jobs as Spoilers seriously, these grandparents: 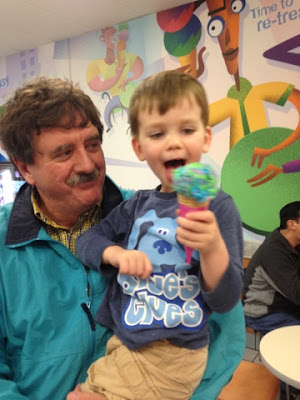 …so watch out, little Sam.  You’ve got all kinds of adults around who like you too. 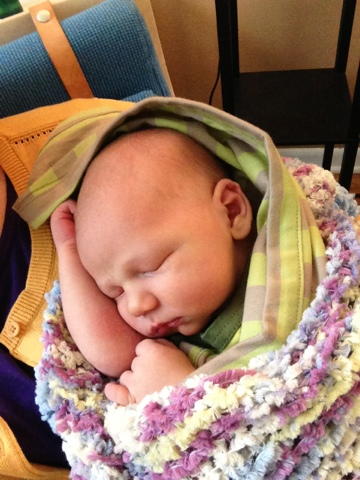 * (Actually, despite my teasing, Rachel and I both inherited the planner/need-to-control-things gene so these emails were appreciated)