Both were taught by professional artists, but the watercolor teacher was disorganized, easily distracted, and frequently came late to class (including 15 minutes late the very first day).  Her lessons usually involved her showing us some new technique, and then giving us time to paint.  There were rarely specific instructions on what to paint, which is stressful for new artists.

On the other hand, the oil painting teacher had specific tasks.  Each class he would spend about 10 minutes talking about a concept, then he would demonstrate the task by painting it himself, and then we would have 90 minutes-2 hours to paint what we were given while he rotated around the room giving specific feedback.

It was really intimidating to have him come up, look your painting over, say, “Okay…” and then launch into a list of things you need to change or work on.  I had to fight the urge to immediately start explaining what I was doing.  My instinct was to prove that I already knew what I was doing wrong, that I knew what it should look like but I just hadn’t figured out how to do that yet.  Instead, I kept my mouth shut and listened to what he had to say while taking mental notes on what it felt like to be a student doing something new and scary in front of an intimidating professional.

This was good for me.  It’s important to remember what it’s like to be a student.

On to the pictures!

The Art Student League is housed in an old mansion downtown.  Here’s part of the facade: 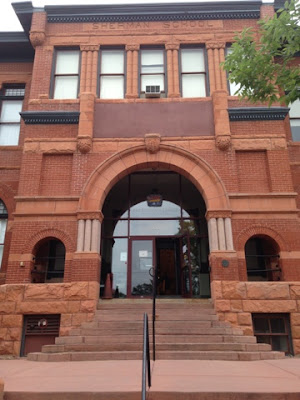 The interior has been converted into a series of studios, offices, and a lending library of art reference books.  My class met upstairs: 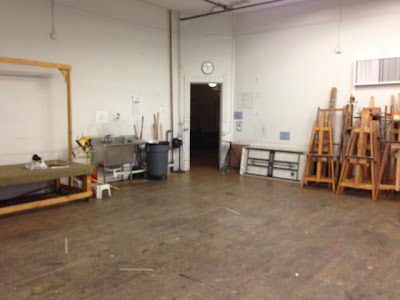 Fun fact:  A bat flew into the room mid-class a few weeks ago.  Everyone stopped what they were doing to watch the riveting story of Will The Bat Figure Out Where The Door Is?  The answer is yes, but it takes a long time.  And there is no chance whatsoever of everyone going back to what they were doing, as the instructor asked us to do, until the end of the bat’s story because 1) there’s a bat circling the room over head and 2) THERE’S A BAT CIRCLING THE ROOM OVERHEAD.

The Task:  Paint a monochromatic still life of the cup and plate below.  Focus on the shapes made by the shadow and the light and do not use more than three values of gray (which you should mix for yourself using the colors in your palette, none of which are gray or black): 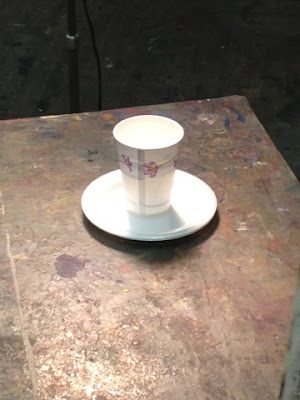 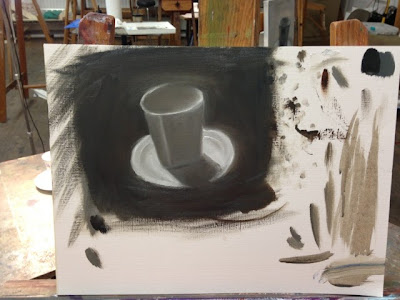 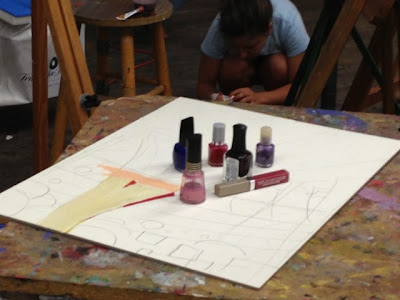 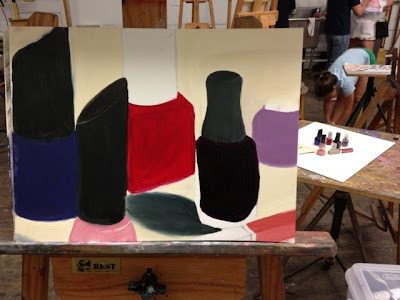 I didn’t finish this painting, as the white spaces and the missing parts indicate.  I suppose I could have worked on it at home, but I really didn’t like the subject so I was pretty happy to abandon it when 9:00 hit.
Week 3
The Task:  Paint a landscape using the picture provided by the teacher. 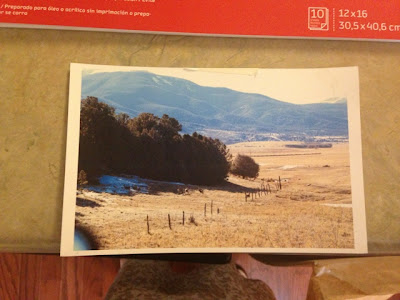 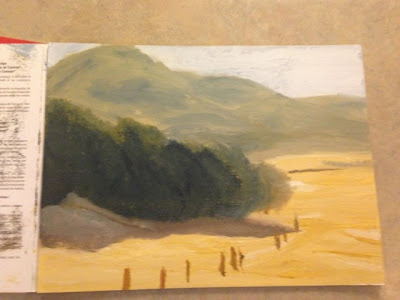 The instructor for this class is very much an impressionist, and this week is where I started imitating his style.  This one kept bringing Matisse’s landscapes to mind.
Week 4
The Task:  Another landscape. 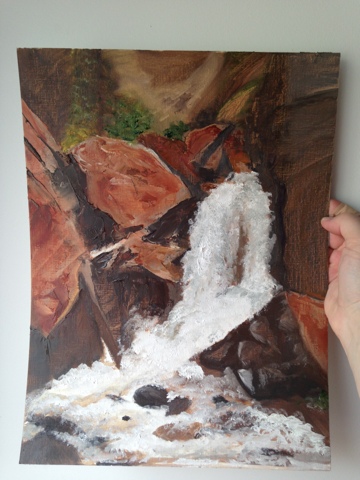 This is where I really started playing with what textures I could create.  I tried painting with the palette knife, and once I started laying the paint on thick I found that I liked the results.  It’s not done, and I really didn’t succeed with the texture of the rocks, but I am pretty happy with how the water turned out.

The Task:  Paint a portrait (just of the head) using a live model.

We weren’t allowed to photograph the model, so you’ll just have to assume that she looks exactly like this: 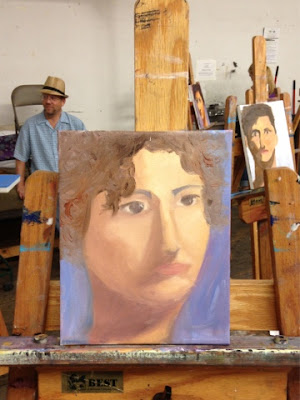 Again, I could have easily spent at least another couple of hours on this one.  There’s a lot going on and portraits are intimidating.  I also felt my lack of training in how to draw faces.  Still, it looks like a woman’s face, so there’s something.
That’s our teacher in the background, by the way.
Weeks 6 & 7
The Task:  Paint a subject of your choice, either from a photograph or from a still life.
The instructor told us that whatever we chose needed to be something that we felt strongly about.  He encouraged us to bring in ideas the week before for feedback.  I printed off a bunch of photos from my travels, but I already knew I wanted to do a Sahara scene.  I had actually tackled that subject in the watercolors class as well: 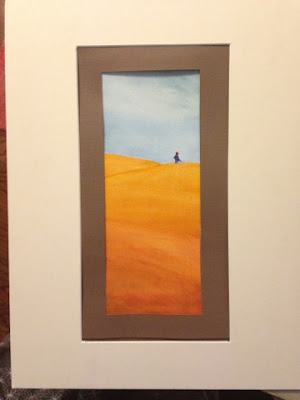 and I wanted to do the same subject in oil to compare the two mediums.  I showed the instructor these desert photos to see what he thought.

He flipped through them with tight lips.  “Okay,” he said, “the idea is to paint something that you have a personal connection to.  I mean, this is like you decide you want to paint a picture of Brad Pitt.  What would you have to say about Brad Pitt?  You’re just painting a picture because he’s good looking or something.  He’s not your neighbor, your relative.  You have no personal connection to him.  You need a connection.  I mean, what’s your connection to this guy?”  He pointed at the middle photo.

And so I painted it. 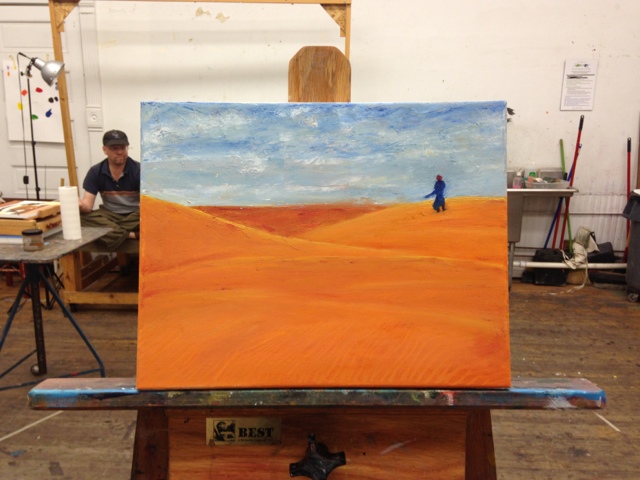 It’s still not something I want to hang up in my home.  I find that I like it better from farther away: 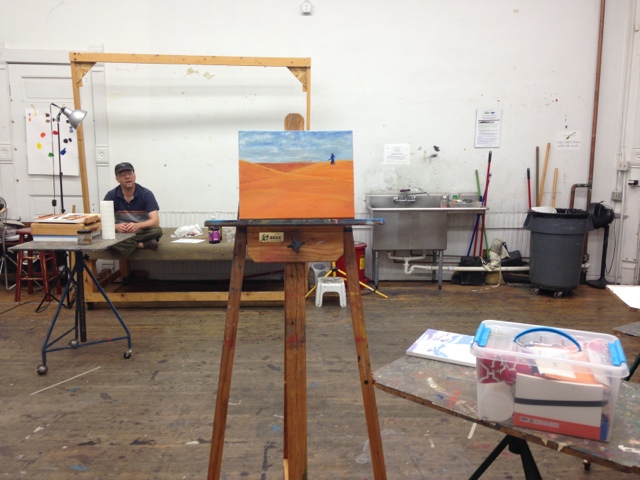 or when it’s up close: 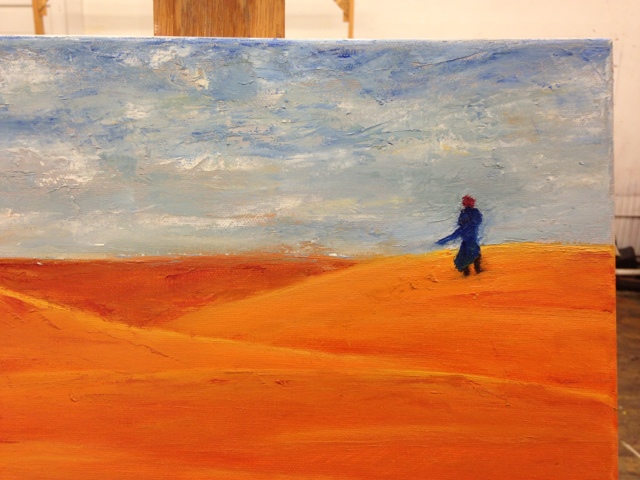 but not so much in between.  I learned a lot while making it and realized about halfway through that if I wanted it to be a good painting, I should really start over again from scratch so I can use all of the things I learned without having to focus so much on fixing early mistakes.  But again, my objective was to learn, not to create art, so I feel like I accomplished what I wanted.

I’m pretty pleased with the sky.  I wanted it to look rougher than the sand (and, for that matter, rougher than it did in real life) because of our experience with the sandstorms.  So I painted it almost exclusively with a palette knife using what I had learned from the waterfall painting, and mixed in far more colors than you might expect for a blue-sky-white-clouds subject.

The sand colors were better at the beginning, but I had to fix things so many times that I lost the original hues and they turned out brighter and more orange than I wanted.  Most of the fixes came with the figure.  Remember how human figures are the bane of my paintings?  Still true.  I painted him and scraped him out four times before getting what you see there.  The instructor and I got into an argument over the scarf.  He claimed it looked like a tail or an arm and told me to paint it out all together.  I can see his point, but I put my foot down.  “The scarf’s important,” I declared.  “I’m leaving it.”

All in all, I’m pleased with the art classes.  I don’t know how much painting I’ll do now that they’re over, but I already notice a change in how I look at paintings.  I know more.  I appreciate more.  And that was exactly the point.