(Note: this is a reposting of the entry I began but did not finish yesterday.)

After the market we turned west towards Mecca; or rather, northwest towards the Globe Theater. 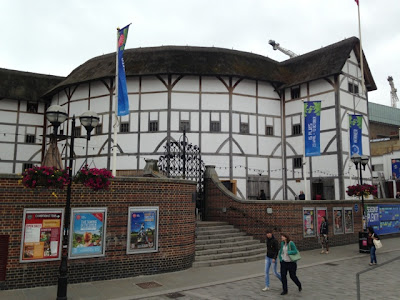 A matinee of “Midsummer” was just getting underway when we arrived, so Mom and I looked through the gift shop amid hordes of elementary school kids running amuck.  I had researched show tickets here before our arrival, but with directing “Midsummer” just last month, I was a little burned out on it.  We settled instead for shopping, photos, and then moving on across the Millennium Bridge.

Oh, wait.  This is out of order, but I’ll leave these photos here.  On our way out this morning we came across this church:

It was mostly ruined by… let’s say giants, and instead of tearing down the remains they’ve planted flower beds where the pews used to be and have climbing structures marking the absent columns.  It’s a lovely affect.

Just as it started to rain, we arrived at the Museum of London.  I wanted to see a bit of the old city wall (referenced in this CPG Gray video), and many of the other sights we’ve visited have referenced artifacts at this Museum. 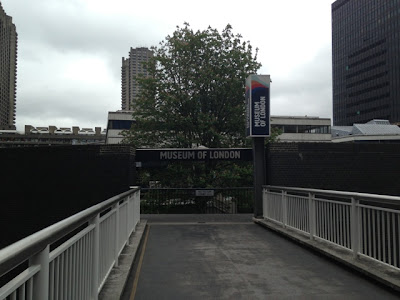 The museum’s courtyard is ringed by a wall that holds, at least at the moment, a photography competition. The courtyard itself is this fantastic verdant spiral that leads down to a small yard and reminded me of one of the battle grounds in some of the later “Zeldas”. 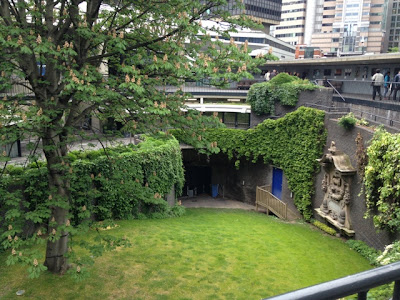 The museum is dedicated to the history of the city itself, from Roman times (when it was known as Londinium) to the modern day (illustrated, in part, by an entire exhibit about Michael Caine).  It has a very Smithsonian feel to it with interactive displays and creepy mannequins.  In the Roman section, they mixed the ancient artifacts with modern ones.  I was surprised to find how much the juxtaposition gave a casualness to the “museum” pieces, making them feel more like everyday tools.

Here’s a Roman room.  The floor was found near the site of the museum (and is wonderfully intact), as was the pottery:

There were a lot of school groups there, many of them French.  I turned one corner to discover a back passage filled with students on their phones, avoiding their chaperones.

I resisted the urge to turn them in.  I’m on vacation, after all.

While taking a break in the museum café, we decided to go see the production that was advertised for the Rose that night.  I ordered the tickets on my phone (yay for free museum wifi!), and we had just enough time to head back across the river for dinner at a Turkish place we had passed earlier: