Me: … and that brings us to the locker scene!

Jacob:  What are we going to do for lockers?

Me:  Good question.  Hey, would those of you who have me in class tomorrow remind me to email the janitors?  I heard there might be an extra set around in storage somewhere, but I keep forgetting to ask them.

Jonah:  I know where some are!

Chism:  Yeah, there’s a bunch of lockers outside the football tent!

Me:  Well, that’s handy.  I’ll ask the janitors about them-

All of the guys leap off the stage and run out of the theater.

The Girls:  Wave at me from the circle they’re laying in upstage.

I exit the building and cross to the football field. There in the distance is a white pickup truck, all of my boys, and a large set of battered blue lockers being hoisted in the air.  I can hear the boys arguing.

Jacob:  We couldn’t carry them all the way across the field, so Ezra got his truck!

Robert:  Yeah, I got crushed!

Me:  We need to rehearse, guys.  Just put them back and we’ll get them another day.

Me:  Come back inside, boys.

I head back in.  Five minutes later, the girls and I are still waiting.  I open up the back door to the house and discover the boys pulling up behind the theater.  One of them is driving the truck.  One edge of the lockers is propped up on the tailgate of the truck while the other six boys are supporting the rest of the lockers as they walk behind the slowly-moving truck.

The Guys: (straining under the weight but gleeful) We figured out how to get them here!

I notice a blue-metal pile behind them: 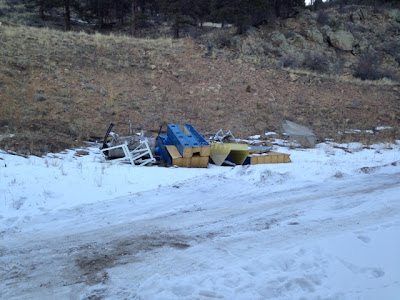 It is literally a pile of discarded lockers right outside the doors of the theater.  I clear my throat.

The guys turn simultaneously while struggling a little to support the weight of the lockers they have “driven” a quarter a mile.

The Guys:  Groan in unison, then start to argue again.

I look at the size of the lockers they have selected, then at the small backdoor to the house where they’ve pulled up.

Me:  How are you planning on getting them inside?

Me:  Why didn’t you just pulled around to the loading dock on the other side?  Those doors are much bigger!

The Guys:  Are you kidding?  Do you know how long it took us to walk them over here?

Robert:  I got crushed!

I sigh and pull off my scarf, using it to measure the height and width of the lockers, then the dimensions of the door.  The guys continue to hold up the lockers.  They groan.  I take my time.

Me:  It should just barely fit through if you stand them on end.

The girls appear in the doorway at this point.  After laughing at the boys and the previously-unnoticed pile of lockers right outside the door, they help the guys reposition the lockers and slide them through the door, shoveling in a pile of snow and mud along with it.

The Guys:  We did it!  High fives and self-congratulations are handed out all around.

Me:  Um, guys?  How are you planning on getting them up on stage?

The Guys:  Um…  They eye the carpeted distance between the back of the house and the stage itself, as well as the three-foot height of the stage.    We’re on it!  They start to strain against the lockers.

I eye the melting snow-mud.

Jesse: Comes in from the band room.  Hey, I just wrapped up with the pit orchestra.  How’d your rehearsal go… He trails off, eying the battered lockers and the snow-mud covered carpet.

Me:  We found lockers. 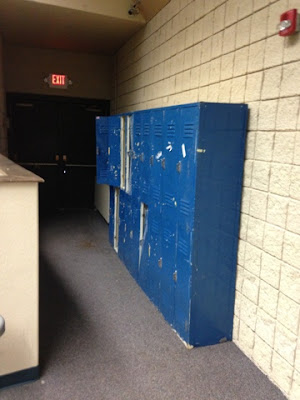