As you may have gathered from my lack of activity here, it’s been a busy couple of weeks.  Let me catch you up.

The field trip went really well.  Since we were leaving during that class’ period, I scheduled our departure for much earlier than needed just in case we hit snow, traffic, or construction.  With none of the above interfering, we arrived 40 minutes early.  So I led the kids over a few blocks to Larimer Square and, after out two different coffee shops as well as going over the usual field trip perimeters, I turned them loose.

A couple of the kids followed me into the Market and they were impressed with the type of food offered at what I had described as a gourmet grocery store and bakery.  I picked up a large sticky bun covered with caramel and nuts and met my group at the appointed corner at the appointed time.

I tore off a piece of my sticky bun, then offered it to the kids.  After I explained what it was, a few of them tentatively broke off tiny pieces.  One girl was reluctant – “It’s yours,” she said.  “Why are you offering it to us?”

One of the students who had come to New York with me reassured her, “This is what she does,” he said.  “She brings us delicious and weird things.”

Still, they were reluctant to eat it, so I handed the plate to one of them and then picked up speed to walk with a couple of students ahead of me.   I looked back about a minute later.  I imagine it went something like this:

(Hmm… the Youtube editing site I used doesn’t seem to show up on Google Reader, so if you’re on an RSS feed you may want to click through to my blog proper to see this oh-so-important 3-second clip.)

“It was really good,” one of them said in explanation as he handed me the empty plate.

“Good!” I said as I tossed the plate into a nearby trashcan.

We arrived at the theater at the perfect time, and settled in to our seats to see a student matinee of The Giver.

The show was fine, but not remarkable.  They did work the gray/color changes into the sets, which I was glad for, and the use of projections for the transfers of memories was well done.  I’m not a huge fan of the book, though, so the story itself was about as appealing as I expected it to be for me.  The best part of the show for me came when, during the post-show Q&A, the host asked the audience to stand if this was the first live, professional play they had seen.  About 2/3 of the audience stood up.  Not a single one of my kids did.  Achievement unlocked! 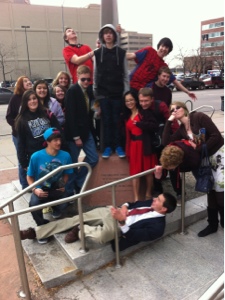 Like usual, we grabbed lunch on 16th Street after the show, and arrived back at school with 30 minutes to spare for a post-show discussion before school let out and speech practice began.

The Home Meet was two days after that, and although I enjoyed the field trip, I did begrudge the loss of time during the day to get things organized.  I wound up working late most of that week getting things ready for the home meet, but I think it paid off.  My organizational needs were met (and, oh, you should have seen my portable-file-bins of organization!  There were labeled, alphabetized files with color-coded sticky notes of instructions to my T.A.s with folders not only coded according to the label itself but the justification of the tabs…. I let all of my office-supply-based-OCD-ness run rampant and I loved it), and the speech meet went beautifully.  We actually broke the 8-year-old record for end-time for full meets by a solid 25 minutes (whoo!), which prompted the coach from Roaring Fork to declare his love for me.  We actually released early enough that even after the clean-up and the drive down the mountain I still had time to meet up with Rachel and friends downtown for dinner at Mici’s.

After two relatively normal days of school, I packed up the cat and headed to Junction Tuesday night for the Thanksgiving holiday.  Rachel, Ben, Jack, Andy, Jenn, and their respective dogs all came down Wednesday evening, and Grandma Cook flew over from Salt Lake on Thursday.  It was a low-key holiday with a lot of cooking, crafting, and merriment.  Although I did a little work on my felt ornaments, I spent a lot of time creating a literary art piece per my speech class goal project for this semester.  I wanted to teach myself scherenschnitte and create some literary-based art for the alcove above my fireplace.  Here’s the finished-but-not-framed-or-matted product:

My brother could name the book.  Can you?

The plan is to complete three more, each referencing a key book from my childhood reading, but with auditions for the musical starting tomorrow and a play in two weeks, I’ll have to put this new hobby on a brief hiatus.  Perhaps over Christmas I can crack out the Exacto knives again.