With a full week off for Spring Break, I was able to squeeze in two trips. Two days after my return from Seattle, my family and I rendezvoused at DIA for a weekend in New York!

(I took zero pictures while there, so this trip recap’s illustrations come courtesy of Jen, Ben, Rachel, and Mom. Thanks for sharing the pictures!)

Mom, Dad, Rachel, Ben, Andy, Jen, and I arrived Thursday night and celebrated by eating pizza at Sbarro’s in Times Square. We broke the chain-restaurant rule in favor of the the feed-Rachel-as-soon-as-possible-when-she’s-hungry rule.

Jason took the train up from DC and joined us Friday morning at the Farmer’s Market in Union Square. I love this market. Check out these wreaths:

We all went to breakfast at Le Pain Quotidien

A delicious, lingering meal that inspired a lot of early-in-the-trip photography.

We split up after that, and Jason and I browsed through ABC Home. There were some things that I loved that baffled Jason, some that Jason loved that baffled me (Mirror-topped tables with plastic chairs? Seriously?), some that baffled both of us, and some that we both loved but certainly couldn’t afford ($100 hand-painted pillow covers, for example). Oh! And this fantastic section of old trunks, leather arm chairs, rugby equipment, French nautical law books, and other such items that drip of testosterone. Most excellent, indeed.

As we were finishing our fantasy shopping, my mom called to say she had scored tickets to the sold-out Tim Burton exhibit at MOMA. ‘Cause she’s good like that. We hopped on the metro and headed uptown.

The Burton exhibit was packed with people, which made it hard to enjoy. The entrance was well-done, though, and it was fun to see items from his movies, like the Nightmare and Corpse Bride figures.

The highlight of the trip, though, was the other featured exhibit, The Artist is Present. A retrospective of a performance artist’s work, it was fascinating, strange, and disquieting. Although we didn’t get a chance to embrace the energy of the moment by sit statutorily across from the artist herself,

Jason and I took the plunge and interacted with a recreation of another of her pieces – we squeezed between two completely naked people standing facing each other in a narrow doorway.

With the lesson learned that all true performance art includes nudity, we went to lunch at the Stage deli. I ordered a BLT that was more like a BBBBBBLT:

My Dad, who’s always generous about sharing his food

let me try some of his tongue sandwich.

We went to the Museum of Art and Design to see an inspiring paper-cutting exhibit. I can’t quite figure out how to work paper-cutting designs into my current show, but someday….

We also found a Pinkberry’s nearby. Yum!

That night we went to the event that inspired this trip:

It was disappointing – the music didn’t fit the show and the jokes were obvious and easy. The best part was the simplest – when Fester sang a love song to the moon, floating and dancing with the stage tricks of the Matrix Ping Pong act. It was also, however, a perfect show for a high school to do, so I’ll be watching out for the rights to become available.

So we all got pizza!

Saturday morning we went to the Metropolitan Museum of Art.

I communed with the Greeks (or at least the Roman and Renaissance version of the Greeks) for a while, relishing how knowledgeable I am now that I am a Humanities teacher. 🙂 Jason met me there after heroically waiting on hold for 40 minutes to score standing room tickets to La Traviata for us that evening. We had just enough time to admire this illumination exhibit and these remarkable mourning statures before dashing off to Chinatown to meet Rachel’s friends Mavi and Jeff for an authentic dim sum lunch at the crowded, noisy, delicious, gold-and-neon-lit Jing Fong‘s. 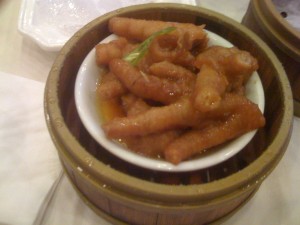 That last one is chicken legs. I did not partake.

as we shopped around SoHo/the Village, including a trip to a great knitting/fabric store and yet another favorite bookstore of mine.

Jason and I were put in charge of dinner, and after a few phone calls we got a reservation for 8 at BLT Fish.

Oh, don’t get me wrong. It was delicious. We ordered three main entrees and several side dishes to share. We were eating early, so the wait staff hovered attentively nearby, ready to whisk away and replace our utensils as we finished each course. It was quiet enough for us to talk, and one fish was served on an entire bed of roasted garlic cloves.

But take a look at that last picture.

Do you see it?

When each of the fish entrees were ready, they presented them to us. Cooked, but complete, head and tail and fins in place, as if they had leaped from the sea to the serving plate. It was startling to turn around and see the Cantonese-style crispy red snapper, perched alertly on a plate with a skewer through his nose, looking at me balefully as a waiter presented him proudly. He (the waiter) offered to bone him for us, and I gratefully watched the fish get carried away.

But then he returned, boned, but looking as perky and life-like as ever.

And there he sat, right next to my plate, gazing at me as I tried to take a bite of his flesh while avoiding eye contact. At least his friend, the baked Maine black sea bass had the courtesy to be lying on his side, so his reproachful eyes were directed at the ceiling. The lobster, meanwhile, was headless. But the snapper. Oh! the snapper.

Ben, across the table from me, asked for a serving and I happily passed the plate. No luck, though. The plate came right back to the only empty space on the table, and the fish continued to stare at me.

Noticing my discomfort, Jason plucked up a bit of the carrot and parsley garnish with the serving tongs and draped it over the snapper’s eyes. Thus I spent the rest of the meal being watched by a fish hiding in the bush. That is, until my Dad took the waitress’ recommendation and cut off the head to pick out some of the leftover meat.

Jason and I bid farewell to the others as they went to see Lend Me a Tenor, and we went to Lincoln Center to attend the opera.

Oh, I love going to the opera there! Standing for the entire show was a bit uncomfortable, but the Met’s atmosphere is still my favorite.

As we waited for the curtain, Jason nudged me and whispered “stuffed rabbit.” I looked at the lady to his left, expecting to see a stole or muff. Nope, the older woman instead had pulled a small, furry, toy Easter bunny from her purse and was tenderly petting its head. She then carefully positioned it on the armrest, making sure that it had a good view of the stage. She departed during the third intermission, we assume because it was past the rabbit’s bedtime.

Walking back to my hotel, we watched the fog and city lights, which Ben so neatly captured:

We happened to run into the rest of the crew in the lobby of the hotel, who all raved about the show they had seen. Darn it, I’m just going to have to come back to see what I missed!

We flew out early the next morning, thus ending our weekend in New York.

Thanks, Parents, for the fantastic trip!